Reporting on the news (formerly).

Kill James Woods for revenge and then frame Tom Tucker.

Diane Simmons was a major antagonist in Family Guy. She was a supporting character in the first eight seasons, before being revealed to be the main antagonist in the Season 9 premiere "And Then There Were Fewer". She was also a posthumous antagonist of the subsequent episodes of Season 9, the Season 10 episode "Tom Tucker: The Man and His Dream", and the Season 18 episode "Coma Guy".

She was voiced by Lori Alan.

Diane was the coanchor of Channel 5 News alongside Tom Tucker for most of the series. She began dating James Woods after meeting him at a party, and was for awhile her life was perfect. When she turned 40, however, Tucker arranged to have her replaced by a younger, more attractive anchorwoman, and Woods dumped her. Diane then formulated a plan to get revenge: She would kill Woods, and frame Tucker for the crime, thus getting them both out of the way of her ultimate ambition to become lead anchor.

She manipulated a young intern named Priscilla into seducing Woods and persuading him to become a born-again Christian. Wanting to atone for his sins, Woods invited the people he had wronged - including the Griffin family and several supporting Family Guy characters - to a dinner party at his isolated estate. Unbeknownst to Woods, however, Diane had set a pistol to go off and kill him once he had sat down at the head of the table. Unfortunately, Glenn Quagmire's date Stephanie sat in the chair before Woods, so the gunshot meant for him killed her.

Realizing that her plan was in danger of failing, Diane improvised and caused a blackout, during which she stabbed Woods to death. When Muriel Goldman saw her putting the bloody knife in her suitcase, Diane killed her to keep her quiet. At that moment, Priscilla, who had not known of Diane's plan, discovered what she had done, so Diane killed her as well. Finally, she killed Derek Wilcox by bludgeoning him with a Golden Globe Award when he tried to call for help. She then hid the Golden Globe in Tucker's suitcase, framing him for all of the murders.

Her revenge complete, Diane was about to go home, but Lois Griffin figured out that she was the killer. Diane calmly explained what she had done, and then prepared to kill Lois. At the last moment, however, Stewie Griffin shot Diane dead to stop her from killing Lois before he could. Tucker was exonerated, and Diane was replaced as co-anchor by Joyce Kinney. 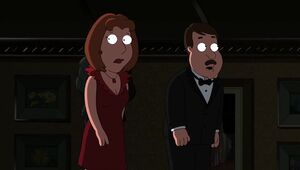 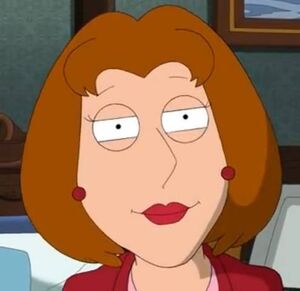 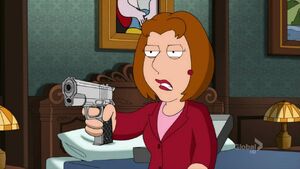 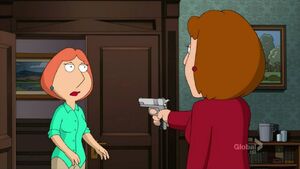 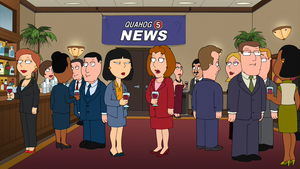 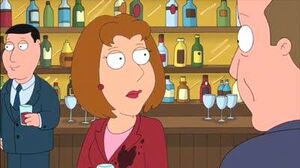 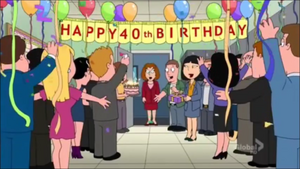 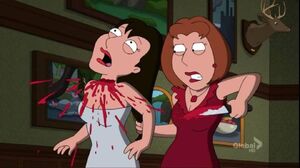 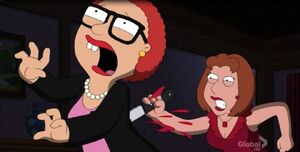 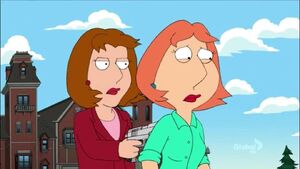 Diane falls to her death. 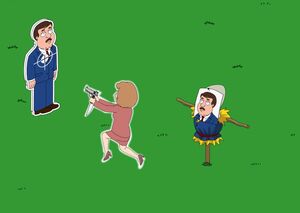 Diane in "Family Guy: The Quest For Stuff" 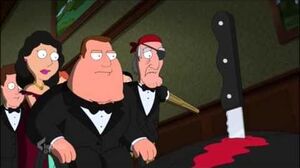 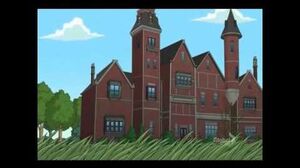