Acquire money from the Forelli Family in a drug deal (entirely successful).

In the year 1984, Ricardo Diaz moved to Vice City in the United States of America. He estabilished a business of selling drugs through Vice City. Overtime, Diaz generated much money from the distribution of his drugs. He eventually earned enough money to purchase a mansion on Starfish Island in Vice City. Diaz imported several Colombians from his home country. He recruited them and they formed a gang.

For the next 2 years, Diaz and his gang reined supreme. They destroyed the rival drug cartel operated by Lance Vance and his brother Victor. Lance survived but Victor was killed.

Later, Tommy met Lance who was seeking revenge for the death of his brother Victor. Afterwards, Tommy began working for Ricardo and his gang. At the time, Tommy was unaware that Diaz was the person responsible for arranging the ambush of the drug deal.

During Tommy's service, Lance infiltrated Ricardo Diaz's mansion and attempted to kill Diaz. He was captured by Diaz's gang and was taken to a junkyard. Diaz's gang tortured Lance. Tommy found out and killed the men who were torturing Lance. Lance revealed that he wanted to avenge his brother. After he was scolded by Tommy, they left the junkyard. They were ambushed by more members of Diaz's gang but managed to escape. Afterwards, Tommy delivered Lance to a health care facility.

Later after Lance's recovery, he met Tommy in Starfish Island. They attempted to invade Diaz's mansion. Diaz's gang tried to kill Tommy and Lance. The entire gang was killed. Tommy and Lance reached the main hall where Diaz was waiting for them. He attempted to use an assault rifle but ended up being severely injured. Together, they shot Diaz and killed him.

After the death of Diaz and his gang, Tommy Vercetti took over the mansion and estabilished his own gang. Richardo's drug business was seized by Tommy and Lance. 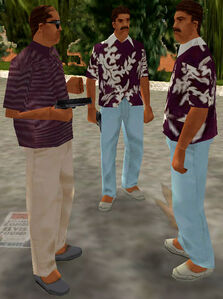 Retrieved from "https://villains.fandom.com/wiki/Diaz%27s_Gang?oldid=4043178"
Community content is available under CC-BY-SA unless otherwise noted.