Perform the Ritual of Engagement.

Dick Hamilton is the secondary antagonist of Clock Tower 3. He is the grandfather of Alyssa Hamilton, and the father of Nancy Hamilton.

He was voiced by Paul Humpoletz, who also played Lord Burroughs in the same game.

Dick's real surname is Brown, a descendant of William Burroughs (also known by his alias Billy Brown), and thus, a descendant of the Burroughs family. He is married to Francesca Hamilton, a Rooder, and adopted her surname. The two gave birth to a baby girl in 1966, named Nancy. Dick was a former soldier, as exhibited by the military portrait in his bedroom.

Dick at first denied the supernatural beings, but he started to believing it when he discovered the Book of Entities, and his wife Nancy started to emerge her powers. When Nancy was in her twenties, she married a man named Philip Hamilton. But Dick was heartbroken when giving his daughter to another man, but he accepted it so that the Rooders powers can be pass down to another female. He developed a strong hatred for Philip, Saying he had no spine.

In April 2, 1988, Dick's first grandchild is born, and he gives her the name "Alyssa". In this time, Philip try to convince Nancy not to have Alyssa follow the Rooder path bacause of its dangerous nature. So Dick have to do something about this, so he secretly kills Philip by pushing him over the balcony where his head splits by an axe below. For now on, Dick helps Nancy to raise Alyssa, where Dick becomes a father figure to her.

When Alyssa turns ten, he begins plotting to perform the Ritual of Engagement on her when she turns fifteen, as a means of attaining immortality in order to be with her for all eternity.

In 2000, Dick begins a search for the Burroughs Castle, traveling across England for a few years, only to eventually realize it was literally where he started. He doesn't keep in contact with Nancy and she assumes he simply went missing or perhaps Nancy did know, but kept this a secret from Alyssa.

Alyssa Hamilton is a 14-year-old girl living at a boarding school. One day she receives a letter from her mother, Nancy, telling her to hide until after her 15th birthday. Alyssa goes against her mother's wishes and returns to their home, which is a boarding house. Her mother is not there and the only person in the house is a shady man called The Dark Gentleman. He offers Alyssa cryptic warnings and clues as to her mother's fate. Alyssa is frightened, but is still determined to find out what happened to her mother.

Upon returning home, Alyssa begins to wonder why her mother wanted her to stay away. Soon, she realizes that the mysterious "Dark Gentleman" hopes to gain immortality by becoming an Entity himself, using the Ritual of Engagement. This dark ritual requires the "heart of a Rooder". When the Clock Tower begins to form on top of the Burroughs Castle, Alyssa is sent to the top of the tower to confront the Dark Gentlemen. He throws her down the tower to "Hell", which resembles an underground factory.

Regaining consciousness, she confronts another Subordinate, the Chopper. After temporarily escaping from him, Alyssa looks back at a memory from when she had just been born. Hearing a scream from the stair balcony, Alyssa runs to find her father struggling against her grandfather, Dick. Her father is thrown off the balcony onto an axe head, splitting his head in half. Alyssa denies that her grandfather truly meant to kill her father and engages into a battle with the Chopper, but fails to kill him and is sent to a graveyard.

After completing this mission, Alyssa is warped in time once more to the home of the mysterious Darcy Burroughs, who lived on the very land that Alyssa's house now resides upon. At this point in time it is the location of the titular Clock Tower. Burroughs, obsessed with the secrets of the Entities and Subordinates, hires the homicidal twins, Scissorman Ralph and Scissorwoman Jemima, to murder for him. Burroughs plotted to become an Entity himself; however, his daughter died on the eve of her fifteenth birthday, ruining his plan and driving him insane. He died crushed in the Clock Tower's gears, swearing revenge. Eventually, with the help of Dennis, Alyssa overcomes the twins.

Once Alyssa returns to the present day, she discovers that the villain behind her mother's disappearance is her own grandfather, who lived with the pair since Alyssa was a child, and performed extensive research on the Rooder powers. However, he was descended from Burroughs, and was eventually driven insane by the connections between his and his ancestor's situations, and allowed Burrough's evil spirit to fuse with him. He destroys Alyssa's mother and plots to fulfill Burrough's plan with Alyssa's heart; however, Nancy transfers what is left of her own Rooder power into Alyssa, granting her the strength to destroy her grandfather and Burroughs. After she defeats him, she immediately reunites with her mother. The tower then collapses and the evil spell of the Subordinates is permanently lifted. Alyssa awakens in a field of flowers. Clutching her clover pendant, she runs over to hug Dennis nearby. Smiling, she says, "Mum, we did it! We did it, Mum!". 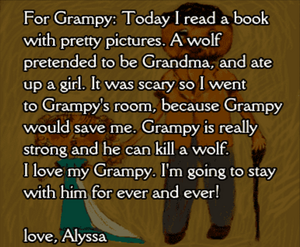 Dick drawn by Alyssa as a child. 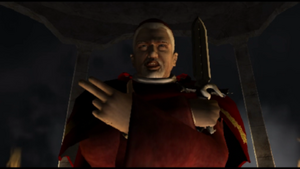 Dick performing the Ritual of Engagement.
Add a photo to this gallery

Retrieved from "https://villains.fandom.com/wiki/Dick_Hamilton?oldid=3850955"
Community content is available under CC-BY-SA unless otherwise noted.