Dickson of the Trinity
Dickson

Veteran of the Battle of Sword Valley

The Sabre (his gunblade)

Gain the powers of a god.
Kill Shulk and his friends (both failed).

Dickson is the secondary antagonist in the 2012 video game Xenoblade Chronicles. A veteran of the Battle of Sword Valley a year before the events of the game, Dickson is an old comrade and friend to Dunban and Mumkhar. He is a resident of Colony 9 and looks over Shulk, Reyn and the other residents. He claims to have found Shulk in the Valak Mountain with the Monado and his parents dead. Dickson raised Shulk like his own son and starts the game off as a helpful mentor before revealing his true colors as one of Zanza's disciples.

He was voiced by Tsuyoshi Koyama in the Japanese version, and Anthony May in the English version.

Dickson (as he appears in Colony 9) is 44 years of age. He wears a red bandanna, and has long blonde hair that goes past his ears. He wears a black sleeveless jacket over a blue coat of sorts, and reveals his chest. He wears a strange necklace with a blue circle on it. He wears a brown belt over white jeans, and has white boots that reach to his knees. In combat, he wields a long sword that is longer than his arm, and can also double as a gun. This weapon is named a Sabre.

In his Giant form, Dickson is massive, with puce tattooed skin and a large amount of outward pointing things on his back. These winglike parts of his body are not normal Giant anatomy; they come from the power bestowed by Zanza. He retains his hair, mustache and necklace, and aside from that wears only a dark purple skirt. Instead of his dual-purpose gun/sword, he now wields a purple sword which can switch form to become a cannon. His eyes have no visible pupils or irises.

Before the events of the game, Dickson discovers the Monado in an unnamed icy region of Bionis, which is later revealed to be the Ose Tower on Valak Mountain. He finds the only person alive there is a very young Shulk, curled up sleeping below the Monado. Taking both the boy and the sword, he heads out.

Dickson fights alongside Mumkhar and Dunban at the Battle at Sword Valley, uses his rifle/sword to fight. At first, he tries to get Dunban to retreat, considering orders to pull back to Colony 6. Dunban refuses, however, and they continue to fight. Dunban later collapses under the Monado's influence, while Dickson jumps to his aid and takes a hit, taking down a Mechon as well. He and Dunban charge at a group of Mechon and survive, while Mumkhar tries fleeing to return for the Monado later on, but appears to be killed by a group of hidden Mechon instead.

Dickson is shown now to be a wanderer who has traveled all over Bionis, not being present in Colony 9 often. He is first seen in the Weapons development lab, reading up on Shulk's research notes on the Monado, asking what the "Hidden functions" Shulk mentions in his notes are. After their conversation, he tells Shulk to get out of the lab more and walks off. He is later seen at Dunban's house, telling Fiora where Shulk would probably have gone, but is not present when the Mechon attack.

After the party is ambushed by Metal Face and his minions outside Colony 6, Dickson and Dunban arrive to aid them. This is the only occasion when Dickson can be one of the party members. However, Metal Face proves too strong even for them, and is only driven off when a Telethia attacks. Dunban joins the party as a playable character after this, with Dickson as a guest leading the way to Satorl Marsh.

When he leaves the party at the end of the marsh, Dickson mutters, unheard, about not feeling good about deceiving "those kids". However, he returns to Colony 9 and aids them in defending against the Mechon.

Dickson is present at the discussion of an allied battle force being created, the joining of the three sentient races of Bionis against the Mechon. He convinces Kallian of the necessity of war, and goes off to meet the party before they launch their attack on Galahad Fortress. He supplies them with Anti-Mechon weapons that he built, then leaves immediately with Alvis to return to Alcamoth. Later on, Kallian is informed of the party's disappearance after wrecking the fortress. Dickson calms Kallian by telling him he knows where the party is, before going to meet the party at the Hidden Machina Village on the Fallen Arm before they leave for Mechonis Field.

During the battle of the Allied Front, Dickson is seen piloting a Havres and attacking Faced Mechon. After Mechonis begins to move, Dickson curses Shulk and leaves the battlefield to find the party. He finds them and is in the party until they reach the Mechonis Core]], where he stays behind with Alvis as the party goes to confront Egil.

Dickson is revealed as the secondary antagonist during the events at the Mechonis Core, just after the battle against Yaldabaoth and before Mechonis is destroyed. He shoots Shulk in the back as he is making a truce with Egil, incapacitating him and allowing Zanza to exit Shulk's body.

He then reveals himself as Zanza's disciple, Dickson of the Trinity, who Egil recognizes from much further back. A flashback shows Dickson as a Giant, standing behind Zanza when he first attacked Mechonis.

When the party flees Mechonis on Junks, Dickson is outside waiting for them with an army of Telethia. He attacks the party with his own Telethia]]. The party is no match for a full group of Telethia, but Kallian appears with the Havres squadron and defends them. Dickson warns Kallian that he should be keeping an eye on his own people rather than the Telethia, and reveals Lorithia to also be a traitor. She begins releasing large quantities of ether, which causes the High Entia in their Havres to transform into Telethia. However, Kallian retains some control over his Telethia form, and attacks Dickson and Lorithia, who are unable to stop him. He flies into them causing an explosion, suggesting that he sacrificed himself in order to destroy the disciples. Nevertheless, Dickson survives and appears again at the gates of Colony 6 with many more Telethia. The party is once again surrounded and outmatched, but Shulk appears at the last moment, destroying most of the Telethia. Dickson expresses surprise and annoyance that Shulk is somehow still alive, then sends his own Telethia to fight him.

After Shulk defeats it, he commands Alvis to shoulder some of the "hard work", revealing Alvis to be the third member of the aforementioned Trinity. After Alvis' Telethia is defeated, the pair escape on some Solidum Telethia. Alvis says that they will be waiting for the party, and Dickson adds that they will be on their "best behavior", to which Shulk replies, "And we'll be the best guests you ever had." Dickson acknowledges the good comeback, and once out of sight of the party he starts to shake, showing that he is scared. He laughs at himself, saying "After all these years. I never thought the day would come when I would feel fear."

Although Zanza and Dickson imply that Shulk is dead after he is shot, their assessment is premature: when the party flees to Junks the Story Memo reads "Shulk has managed to hold on to his life but now the party has to find a way out of the Mechonis! They need to escape through the Central Factory to the Ventilation Conduit.

When Prison Island is revisited, Dickson mocks the party, letting them chase him up through the whole tower. After the party reaches the top of the tower, he tells them that they must fight him and tries to anger Shulk by repeating that he only raised him so Zanza would have a host. However Shulk replies, "I know. And I must thank you for granting me such power. It's all down to you that I'm standing here ready for you now."

Dickson ends the conversation by reverting to his Giant form, and attacks them. Despite Dickson clearly being much stronger than the group they do not give up, and to his surprise, Fiora manages to block one of his attacks. He takes this to mean she has inherited Meyneth's power, however she disagrees and claims it to be Meyneth's memories instead. Everyone begins supporting Shulk and Fiora verbally, and they manage to release Zanza and Meyneth's power, presumably left over from when the gods were inhabiting them. Dickson is momentarily stunned by this, pausing and murmuring, "It can't be. That power?!" before attacking again.

The two Homs work together to defeat him, Fiora releasing a huge wave of energy and Shulk leaping forward and slashing him deep across his chest. Dickson reverts to his Homs form, telling them that he is finished, and is going home. He also tells them that he "just wanted the power of a god," and that he would not be a martyr to stop them. The party turns away from him, Dunban lingering slightly, and leave to challenge Zanza. Dickson sits and takes a last cigar, saying, "Damn. How'd that kid get so strong? I ain't gonna let you see me die. I won't give you the satisfaction of victory." His voice begins to rasp, and he remembers the first time he saw Shulk in Ose Tower before finishing with, "Looks like the student finally surpassed the teacher." He smiles slightly before slumping forward, dead.

Just before they enter the teleporter to leave, Fiora turns to Shulk and says quietly, "Shulk, his wounds..." Shulk does not answer, but begins to cry. 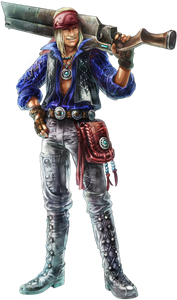 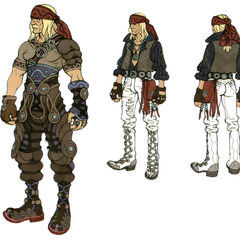 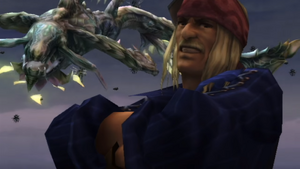 Dickson with a Telethia in the background. 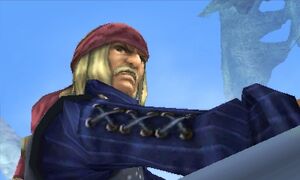 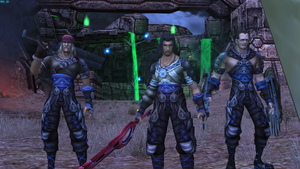 Dickson with Mumkhar and Dunban at the Battle of Sword Valley. 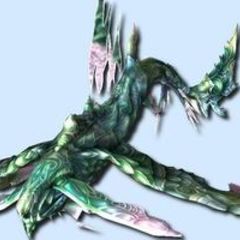 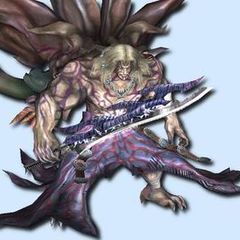 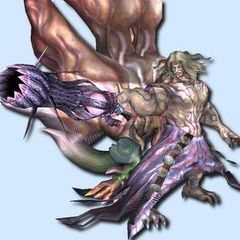 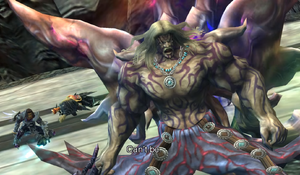 Dickson on Prison Island.
Add a photo to this gallery

Retrieved from "https://villains.fandom.com/wiki/Dickson?oldid=4179323"
Community content is available under CC-BY-SA unless otherwise noted.