Develop, enhance and create Diclonii and Silpelits to replace humanity as the new evolutionary race for Earth.

Enhance and improve Diclonii Virus and ways to inject them.
Enhance Vectors to physically replace humanity with Diclonii. (all Failed)

The Diclonius Research Institute, also known properly as the National Institute on Human Evolution, is a Japanese research facility that was the headquarters, main base and very often the primary residence of most of the antagonists in the manga and anime series Elfen Lied. This institute is located on an island somewhere off the coast of the seaside resort of Kamakura. It is arguably the series' secondary location, right after Maple House. It acts primarily as a holding and research facility for the horned girls who come to be known as Diclonius. While its public charter and funding from the Japanese government was to find a way to control and counter the growing number of children (in the series, all but one are girls) born Diclonius, its true agenda was far more sinister. The Diclonius 'Queen' called Lucy spent three years of her life held captive there, with her escape marking the start of the series.

It is not revealed exactly when or how this massive facility was built. It appears to have opened shop shortly after young Lucy began infecting Human males with the virus that makes them sire Diclonius children. Since the facility was built atop the Kakuzawa family's ancient ancestral home, it seems likely that the Institute's first and only head, Director Kakuzawa, offered up the site or somehow manipulated the Japanese government into choosing it. It is also possible that Kakuzawa had a site pre-set for such a use, since his family believed itself to be descended from ancient Diclonius, persecuted as demons in medieval times, and that a messiah-figure would arrive to re-establish their dominance over Earth.

One of the first and most pivotal recruits to the staff was Doctor Kurama, brought in by the Director's eldest son, Professor Kakuzawa. Kurama quickly discovered that the promise of studying the next wave of Human evolution meant for most others there seemed to mean conducting painful experiments on a group of helpless girls, who were kept and used like animals. His objections sadly never got the other staff to change their ways, but it did have an unintended consequence.

A Diclonius named Number 3 overheard Kurama's complaints against the treatment of girls like herself. Playing possum with her power development for several weeks, she escaped from her holding area and eventually found Kurama. Her motive in wanting to see him is open to interpretation; Either she felt that his inability to help her despite his objections meant he should be punished, or, in a place of casual cruelty, she wanted to thank the only one with morals enough to object. Either way, the result was the same. Doctor Kakuzawa shot her from behind, and within seven months, Kurama and his wife had a child named Mariko who was herself a Diclonius. To spare her life, since new Diclonius births had been ordered euthanized, Kurama bargained away any objections he had and gave himself wholly to the program. His daughter proved to be exceptionally powerful, and was kept in her own specialized holding chamber and kept away from Kurama, placed under the care of Doctor Saito, who played head-games with the child she would come to regret. Kurama replaced the Director's son as head of day to day operations.

Under Kurama's direct guidance, the place perhaps became no less cruel, but it did focus more on its publicly-stated mission of research aimed at containing the Diclonius threat. Under his tenure, two vital pieces of information were discovered. The first was derived from Kurama's own sad experience with his daughter. Kurama came to realize that Number 3's invisible telekinetic 'arms', called vectors, had infected him to cause his daughter to be born Diclonius, and that this was the means by which these births kept spreading. The second, and even more important piece of information, regarded the existence of an original infecting party - a Diclonius Queen. Piecing some evidence together, the forces under Kurama's charge managed to corner and capture the girl they would come to call Lucy. But seemingly nothing good or clean could emerge from the place Kurama now called home ; A young girl who had befriended Lucy was shot by Kurama when she took a bullet meant for Lucy. This action, plus the defensive attitude Kurama took about it towards the imprisoned Lucy, sealed the blood-vengeance between them.

Except for powerful exceptions like Lucy and Mariko, the girls were for the most part kept chained against the walls of their holding areas, their vectors tested by methods such as firing cannonballs of increasing power, weight and speed at their heads. Some never developed vectors at all, and it can be implied that many did not survive. Nana described being washed off with a hose, while she was there. Kurama's affection for her and his morals aside, the place really became no better under him for their charges. His own hands were hardly clean, but this was by Kurama's wish : For as long as possible, he himself personally euthanized all new Diclonius births, ostensibly so that no other would have this terrible burden.

It also seems there were some sections of the facility unknown to most of the staff, and some others that may only have been known to Director Kakuzawa himself. In one part, Doctor Arakawa worked exhaustively to weaponize the Diclonius Birth Virus for its dispersal across the Earth. In the underground grotto, once ancestral home to the Kakuzawas, rejected clones of Mariko were kept, whole lives lived never seeing the sun, and near them was the gigantic mutated form of the Director's daughter, Anna Kakuzawa. Implied to have been lurking there for some time was the assassin called Unknown Man, who sadistically delighted in torturing and raping the horned girls. In one final area, the Director kept the greatest of his treasures, with which he wished to take over the world.

Unknown to Lucy, who had been born and raised with the name Kaede, what she believed of her birth parents was only partly true. While her father had abandoned her in a field, her mother had never agreed to this and also never stopped looking for her. Once Kakuzawa learned of Lucy's existence (it is possible he may have known before anyone else did), it was also realized that Lucy's parents were worth finding. Her father's fate is unknown, but her mother was captured by Kakuzawa, then raped and impregnated by him, bearing the one and only known Male Diclonius, whom he intended to place as the New Adam, making him as his father the God of the new race.

With Kurama's departure/defection, any pretense of legitimate scientific research fell away, and the blind cruelty reached new depths. It is unknown how long the remaining captive girls lasted after Nana escaped. But either during or just after Kurama's tenure, the place made two things : Clones of the late Mariko and the virus meant to displace Human births forever. The clones who were not viable as weapons themselves were used as material for bio-weaponry, their spinal columns with skulls attached once visible on an assembly line. As little as these horned girls meant to Kakuzawa, so much less did his staff. Members of it, even to his favored assassin Unknown Man or his own eldest son would die without his showing any emotion.

Perhaps it was Lucy's rejection of Kakuzawa's plans, followed swiftly by her killing of him, her unfortunate half-brother, and seemingly Anna Kakuzawa as well. Perhaps it was the finalization of Doctor Arakawa's birth vaccine, which the Diclonius sensed as a threat. But the miserable wretched clones, many born without proper faces, rose up at last. They tore the island apart, and in passages best compared to zombie apocalypse stories, hunted down their former captors and tormentors, blocking off and destroying all avenues of escape, their powers as unstable as their features, several hundred strong. Only Lucy, Arakawa, Anna and a clever Agent made it off that sinking island alive.

A wretched Hell on Earth meant to promote a tin God vanished forever, its fate an unwitting classic example of divine wrath. 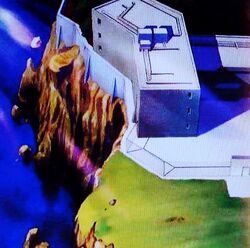 The Diclonius Research Institute, also known as the National Institute on Human Evolution.