Escape from the Darklands (succeeded).

He is voiced by Mark Hamill, who also played The Joker in Batman: The Animated Series, the Skeleton King in Super Robot Monkey Team Hyper Force Go!, Maximus in the Fantastic Four animated series, the Hobgoblin in Spider-Man: The Animated Series, Kavaxas in Tales of the Teenage Mutant Ninja Turtles, Stickybeard in Codename: Kids Next Door, Flint in Disney's Buzz Lightyear of Star Command, Niju in Balto II: Wolf Quest by Universal Pictures, Solomon Grundy in the DC Animated Universe, Fire Lord Ozai in Avatar: The Last Airbender, Trickster in The Flash, ShiverJack in Disney's Jake and the Never Land Pirates, Undergrowth in the Danny Phantom series, Agent Goodman in Disney's Recess: School's Out, Popsicles in the 2016 reiteration of The Powerpuff Girls, and Alvin the Treacherous in the How to Train Your Dragon series.

Dictatious was not always evil, as he used to live in Heartstone Trollmarket. He was a writer, with his books aiding the protagonists many times in the future. He and his brother Blinky shared a good relationship. Unfortunately, at some point, he joined Gunmar because he thought what was he was doing was right for Trolls, but also possibly so he would be spared from Gunmar's uprising. After the battle of Killahead, Dictatious was sealed in the Darklands along with the rest of Gunmar's army.

After many years of this imprisonment, Jim Lake Jr. (the current Trollhunter and main protagonist) transcended into the Darklands to defeat Gunmar and save Enrique.

Dictacious learned of this, and quickly organized his capture, knowing this could be their chance to escape. Just as Jim returns Enrique to Claire, he is taken by the Gumm-Gumms and brought to Dictacious. He is locked up along with Nomura, but it is not long before his friends arrive at his rescue, one of which being Blinky. As Jim's team enters the Darklands, Toby and Claire end up being separated from Blinky and AAARRRGGHH!!!.

Dictacious manages to kidnap AAARRRGGHH!!! and his brother. Dictatious tricks Blinky into telling him where Killahead is, but soon after, Blinky escapes, blinding Dictatious. The gang manages to grab Jim and escape back to the surface world, thinking that it is all over.

However, in the end of the episode "Hiss Hiss, Bang Bang", it is revealed that Gunmar and Dictacious have both escaped the Darklands, with the intention of building another army.

After escaping the Darklands, he joined Gunmar with the Janus Order. Otto Scaarbach, the Grand Commandant, wanted to replace Dictatious as Gunmar's second-in-command. This obviously angered him, sparking a rivalry between the two. Later, Jim and the other Trollhunters return to the Janus Order to find all of the changelings killed by Gunmar, with Dictatious most likely having a hand in the massacre as well. However, Otto was left alive, but under the control of Gunmar's Decimaar Blade as a distraction for the Trollhunters while Gunmar and Dictatious head to Trollmarket, only to be killed by Jim, ending Dictatious and Otto's rivalry forever.

The Trollhunters return to Trollmarket, however, the Gunmar, a brainwashed Draal, Queen Usurna, and Dictatious had arrived already. While Dictatious looks for Blinky in an attempt at revenge, he is captured by him and chained up, in a call back to the episode 'Homecoming'. The Trollhunters interrogate him and fin out Gunmar is going for the Heartstone. They go to stop him but are too late, and Gunmar absorbs the Heartstone's power. The Trollhunters gather all the non-corrupted trolls and bring them to the Gyre Station to escape. Usurna discovers Dictatious and frees him. The two head for the Gyre station, and begin to break down the wall. When they realize the gyre will not get everyone out in time, Claire makes a portal for everyone to escape.  The portal begins to kill her, but the other hunters step in, and the portal is made, allowing everyone to escape. Dictatious and Usurna break-in, but are disappointed to see everyone is gone. Dictatious is last seen in part two by Gunmar's side after he absorbs the Heartstone's power.

When Dictacious hears Morgana's voice, he reports it to Usurna. When Gunmar finds out about this, he travels to find Morgana's spirit, and she tells him that Dictatious had been lying about receiving visions from Morgana to one-up Otto. This angers Gunmar, and when he returns, he attempts to kill Dictatious. AAARRRGGHH!!!, who had been spying, is angered by this, and attacks Gunmar and his forces and runs away with Dictatious. He tells him to go meet Blinky, which he does. As he's running away, Dictatious hears the shout being subdued and captured by Gunmar.

When the parents are close to finding Jim's secret, he retreats into the basement to speak with Blinky, who reveals AAARRRGGHH!!! has been captured, and he learned this from an untrustworthy source. He reveals he has Dictatious tied up. He begs the two to trust him, but they refuse. Jim returns upstairs to confess the truth, but while he does, a swarm of goblins sent to kill Dictatious by Usurna breaks into the basement. Blinky tries his best to fight them off, but they manage to make their way upstairs, attacking everyone. As Jim, Claire, Toby, and Blinky fight off the goblins, two drag off Dictatious. The leader attempts to kill him, but Barbra steps in, blending the goblin, scaring the others off. Afterward, he stays behind at Jim's house with the adults while Jim and his friends make their way to Merlin's tomb to stop Gunmar and Angor Rot and save AAARRRGGHH!!!. While this happens, a police officer sees him and is knocked out by Toby's nana. They discuss what to do with him, and Dictatious suggests killing him, meaning he has not fully abandoned his Gumm-Gumm nature yet. Eventually, they decide to make a play to trick the officer into thinking Dictatious was just wearing makeup. After this, it is revealed Dictatious is living with Toby and Nana.

Dictatious reappears in the 12th century after Hisirdoux "Douxie" Casperan, Jim Lake Jr., Claire Nuñez, and Steve Palchuk time-traveled to the past. He makes his first appearance in Dwoza Trollmarket with his brother, Blinky, who slaps Jim several times because he believes that he's delusional and since they're in the 12th century, he doesn't know him by this point. Dictatious then tells Jim that Callista was more hostile than he was when she woke up. Aftwerwards, Blinky and Dictatious introduce Jim and Callista to Dwoza, and Dictatious asks Callista about her wounds. When Jim guesses that both his and Callista's wounds were healed, Blinky takes the both of them away as Dictatious points out that they have a habit of making things unsafe.

Eventually, Dictatious sees that Vendel and King Arthur are making an alliance to defeat Gunmar with a secret weapon: the Amulet of Daylight. After Douxie helps Merlin create the Amulet of Daylight, it chooses Callista to become the first Trollhunter. During the Battle of Killahead Bridge, Callista, real name Deya, uses the incantation for the Daylight Armor, and leads her army, including Blinky, Dictatious, and countless other trolls, into battle against Gunmar and the Gumm-Gumms.

However, as Blinky and Dictatious fight off several goblins, several more capture Dictatious and take him away. Given many stories told by Blinky and as revealed from before, Blinky first believed that his brother died while in battle. Although, Dictatious was unknowingly sucked into the Darklands along with Gunmar and the Gumm-Gumms, where he becomes the Skullcrusher's advisor and willingly throws away his past ties with the good trolls as he takes Gunmar's footsteps to heart.

Dictatious is a troll with green skin, six eyes, black and white frizzy hair, and four arms. He has a long blue nose and strange patterns all over his body. He wears black pants and occasionally a hood.

Dictatious used to live in Trollmarket, with his brother Blinky, who looked up to him. However, this did not last, as he began to believe that Gunmar's beliefs were best for Troll-kind, He also kinda faked his death; so he abandoned Trollmarket and became loyal to Gunmar. He takes his job with pride and has a rivalry with Otto Scaarbach, who wishes to steal his place as council. He is also shown to be pessimistic, such as when he suggests Jim and the others did not text because Gunmar cut off their hands. 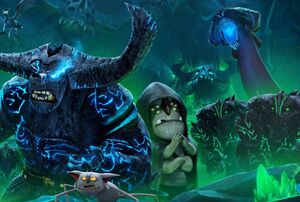 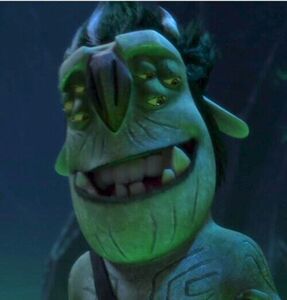 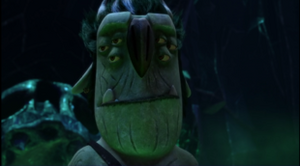 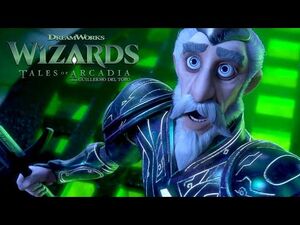 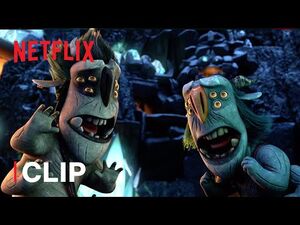