Lots of money and drugs

Gain more power (succeeded for a while).

They are powerful Bolivian drug lords and well known philanthropists in Vice City. Diego is the more quiet of the two and predominantly speaks Spanish, while the more charismatic Armando acts as the "face" of the Mendez Cartel, the organization the Mendez Brothers lead. The Vance Crime Family attract the unwanted attention of the Mendez certain death, Lance lies and claims Sergeant Jerry Martinez stole the coke shipment. Brothers when they mistakenly steal a cocaine shipment belonging to them. Vic and Lance are brought before Armando and Diego to explain themselves; faced with The Vance Brothers manage to frame Martinez to prove their claim, with changing his army record and printing Forbes's FBI record with Martinez's picture, but Armando refuses to let them off the hook so easily, forcibly making them "partners"—although it is clear that the partnership is merely a way for Armando and Diego to use Vic and Lance to do their dirty work and even take the fall for them if necessary. When Vic and Lance retrieve the drugs and money back for them, Armando says they are free to go, but that they must hand over their businesses to them. Vic and Lance refuse to do so and are soon tied up and taken to an area with gas tanks.

After Victor bankrupts the Mendez brothers by exploiting Armando's Domestobot to burn his bearer bonds, Armando kidnaps Vic's love interest Louise. After Vic & Lance drive to the Mendez estate to save Louise and Lance is nearly killed. Vic confronts Armando, armed with a flamethrower, in the Mendez's basement. Armando claims that he killed both Louise and Lance. After the ensuing confrontation, Vic kills him. Vic runs into Armando's study to find the dying Louise and the living Lance.

In the game's finale, Vic pilots an army attack gunship stolen from Fort Baxter and launches an attack on the Mendez Building. After killing several guards, Vic is shot down and crash lands on the roof of the building, where he infiltrates the office block and chases Diego onto the roof, where Diego and the recently arrived Jerry Martinez argue in Spanish. This distracts the two long enough for Vic to kill both in a three way gun battle. 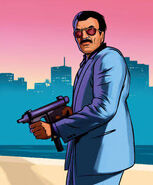