General of the Federation

Lead the Federation to annex all South America countries (succeeded).

Have all American-born people in Federation territories imprisoned or executed (overall failed).

General Diego Almagro is the posthumous overarching antagonist of the 2013 video game Call of Duty: Ghosts. He was the original leader of the Federation during its foundation twelve years prior to the main events of the game.

Amidst the energy crisis in the 21st century, the energy-rich countries of Venezuela, Brazil, and Chile united to form the Federation of the Americas, where General Almagro was appointed as its leader. Under Almagro's command, the Federation began expanding throughout all of South America by conquering each country, uniting the continent under one banner. Almagro was also anti-American and ordered the execution or imprisonment of all U.S.-born individuals within the Federation's territories. When the United Nations sent 20 peacekeepers to Caracas, Almagro had them executed and ripped to pieces before dumping their bodies in the ocean and sent them drifting back to the United States. After this, the Ghosts' leader, Captain Gabriel Rorke convinced the U.S. leadership to send him and the Ghosts in Caracas, Venezuela to kill him.

During the U.S. invasion of Caracas, Almagro had his men launch a missile on a nearby dam, flooding the entire city and killing countless American soldiers, Federation soldiers and presumably innocent civilians. He used this to pave the way for his escape and had his NH90 helicopter come and pick him up. However, the Ghosts, consisting of Rorke, Elias Walker, Thomas Merrick and Alex "Ajax" Johnson, hijacked the helicopter just as he took off. After Elias shot a Federation soldier, Almagro overpowered Elias and was just about to shoot him when Rorke tackled, giving Elias time to recover and shoot and kill Almagro.

Unfortunately, Almagro's death was in vain as this did not stop the Federation from rising to become a global superpower. Furthermore, just after his death, Elias was forced to leave Rorke when he was pinned by the helicopter hanging over the water. Rorke was later captured by the Federation, and was tortured for months via Amazonian methods, transforming him into a Federation field commander and the most dangerous threat that the Ghosts ever faced. 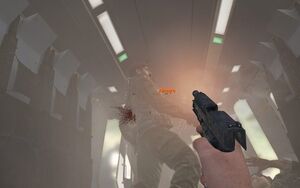