Leader of the Bloodpack

Kill Blade and other inferior vampires by any means (failed).

Dieter Reinhardt or simply Reinhardt is the secondary antagonist in the 2002 film Blade II. He is the leader of the Bloodpack and Overlord Eli Damaskinos's henchman, as well as a notorious rival to Blade.

He was portrayed by Ron Perlman, who also portrays Nino, Slade, Nicola, The Lich and Xibalba.

Dieter Reinhardt was born in 18th century Austria by an unidentified human mother and Drake (Dracula) as his biological father and maker. After Dracula slayed his mother, Reinhardt was the next victim but did not face the fate as his mother but faced the fate of lividity between life and death thus, allowing him the gift of immortality. Later in the years while tracking down his father, Reinhardt suddenly found himself under the tyranny rule of overlord Eli Damaskinos and became one of his "lost children". There he was brought to training in his bloodline to battle the wars of the rivaling tribes of Vampire houses and disbanded upon the the years where Pure Bloods made a alliance with the Humans on the fate of modern day society

Reinhardt and the other "Lost Children" made up a group of vampire ragtag soldiers known as "The Bloodpack": hardened, emotionless and cruel like Frost's Army had been summoned by the remaining Vampire council led now by Eli Damninskios to make an alliance with Blade the daywalker to wipe out the reaper strain from the urban underworld. The group accepts and introduces themselves to Blade and his companions Whistler and Scud. Reinhardt however, approaches the daywalker in a menacing approach, stating that "me and the gang was just wondering.... Can you blush?". The other members begins laughing with Blade smiles and test Reinhardt's abilities in avoiding and gaining possession of a stake that Blade taunts him with. When Reinhardt got possession of the weapon and was prepared to strike at Blade, the vampire hunter dodges with blinding speed, dislocate Reinhardt's arm and plants a uv destructive explosive on the back of his skull that can only be remotely set off.

After Blade frightens the other vampires on how quickly he can dispose Reinhardt, he offered a warning to the defeated latter, stating if he sees Reinhardt or any other members look at him negatively then the bomb will activate and slay the team all together. Blade and the Bloodpack infiltrate a vampire nightclub owned by the House of Damninskios for any activity of the Reaper occurrence where Reinhardt continues to rebel against Blade. During the search, Reinhardt and another member and close friend Chupa attempts to gun Blade down stealthy, but Blade has his weapon's laser sights on them as well forcing Reinhardt to silently swear at him and continues the hunt. Later after the attack, Reinhardt and his remaining comrades discovers a sewage system with a dying reaper, whom used to be one of the guards employed at the blood bank that Jared Nomak first attacked. Nyssa Damninskios operated on the corpse of the Reaper with the group discovering that upon the death of the reapers, their corpses with still be hungered for feeding. Upon Blade's suggestion to hunt the creatures during daylight and annihilate the nests in the sewer system with uv sunlight explosives, Reinhardt and the others were displeased with the option though Reinhardt and Chupa schemes. Upon dawn, Blade orders the group to splinter into three teams: Nyssa, Asad and himself, Verlaine, Lighthammer and Snowman, Reinhardt Chupa and Whistler. When Reinhardt's group enters the darker portion of the tunnels, both Chupa and himself proceeds to assault Whistler beating him to a pulp. Reinhardt purposely walk out on the two and continues to scan the surroundings leaving Chupa and Whistler alone. When Reinhardt spots a group of four to five reapers coming into the tunnels, he falls back to Chupa and whistler's position to discover Chupa already being overwhelmed and bled dry by the reaper herd. With Whistler disappeared, he joins Blade's team and together they fend off the herds with Blade commanding Nyssa and Reinhardt to fall back into the tunnel as he set the bomb device. As Nyssa and Reinhardt are set upon a high end situation, Blade activates the device and Uv radiation sweeps the tunnels, dissipating the reaper army to ash with Nyssa badly injured and Reinhardt's status unknown.

After nurturing Nyssa with his blood, Blade is stunned with electric bullets with Karel Roden (Damaskinos' Lawyer) congratulating him and a deformed Reinhardt knocking him out. Blade awakens alongside Whistler and Scud captured under Damaskino's lair with the overlord revealing the horrible origin of the Reaper Strain and Nomak as his son, a first of their project to in converting the vampire race into a more dominate extraordinary species. With Reinhardt who was involved with the project and still loyal to Damninskios incapacitates Blade and Whistler, removing the explosive device from his skull in which Scud describes it as a "dud". With Reinhardt in power, he demands the security to escort a weakened Blade to the torture chamber for the experiment for his blood while he personally uses the time to torture Whistler hand to hand. When distracted at Nomak invading the compound via camcorder, Whistler disarms and beats Reinhardt unconscious and springs a dying Blade from the experiment lab. When Reinhardt gains consciousness, he prepares to track Whistler and Blade down to the chamber lair where Reinhardt fires at Blade as he plunges into the pool of blood. Blade survives and battles countless henchmen before confronting Reinhardt himself. Reinhardt attempts to kill Blade with a sword, but Blade flips it into the air before catching it and immediately slicing Reinhardt vertically down the middle, splitting him clean in two and instantly killing him.

Reinhardt is a highly cynical, arrogant and egotistical man. He shows no respect for Blade as well as enjoys of antagonizing, harassing and trying to kill him. Instantly, as he leads or controls the Bloodpack, he also shows a sense of fun towards killing vampires despite the fact that he himself a vampire and an henchman for Eli Damaskinos, which means that he is also a sadist. 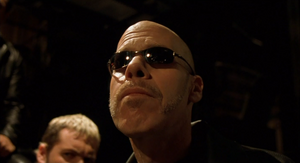 Reinhardt being introduced to Blade for the first time 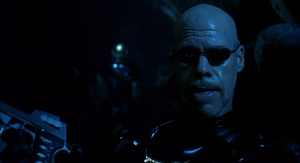 Reinhardt fighting off a large quantity of reapers in the sewers 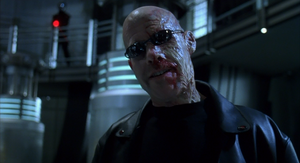 Reinhardt taunting Blade after capturing him 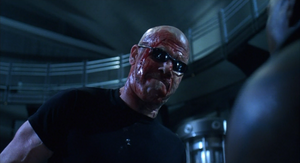 Reinhardt desperately trying to finish Blade off with a sword 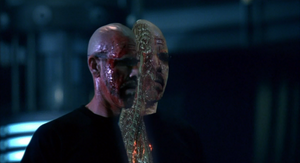