Shocking a Compsognathus with an electric cattle prod for fun.

Capture the dinosaurs for Peter Ludlow in exchange for money.

He was portrayed by Peter Stormare, who also played Lord Dregg in the 2012 TMNT series, Gaear Grimsrud in Fargo, Werner Zytle in the Arrow, The Ghost in 22 Jump Street, Sir Slicer in Adventure Time, Torsten in False Trail, Dino Velvet in 8mm, Abram Tarasov in John Wick: Chapter 2, Dracula in The Batman vs. Dracula, The Nazi Officer in the music video for "Uprising" by Sabaton, Lucifer Morningstar in Constantine and Milos Kirchoff in The Blacklist.

Dieter Stark was one of the many hunters hired by InGen to go to Isla Sorna and trap the dinosaurs in order to get them to the San Diego facility so that he could create his own vision of John Hammond's failed park. He was appointed as Roland Tembo's second-in-command and his position was one of Tembo's conditions for joining the team.

In his introductory scene, Dieter scares away a Compsognathus by shocking it with an electric cattle prod. Later, Stark was instructed to guard the team's encampment, but Nick Van Owen and Sarah Harding slipped by him and freed the dinosaurs captured by the hunters, allowing the creatures to run amok in the camp and destroy the hunters' equipment. When Roland discovers this, he angrily tells Dieter it's the last time he leaves him in charge. Sometime following the breakout Stark had found a broken padlock near one of the cages and showed it to Roland, revealing to him that the herbivores had been released by a yet unknown perpetrator.

Later, the T. rexes attack the mobile lab and the hunters have to rescue the heroes. Stark goads Nick Van Owen into a scuffle owing to the latter's role in the destruction of the camp. However, now that both groups are lost on an island full of dangerous prehistoric creatures, they reluctantly join forces to survive and escape.

Later on, when both teams stop for a little rest, Dieter wanders off alone into the forest to urinate, but stumbles upon a Compsognathus. After trying to kill it and failing, he falls down a slope and encounters more Compies. He tries to call for Carter but the little dinosaurs quickly swarm him and begin attacking and wounding him very badly. He tries to fight back by throwing rocks at them, but they keep coming. Carter could not even hear his calls for help because of his headphones.

Finally, the Compies knock Dieter down, surround him, and then kill and ate Dieter, as the water of a nearby stream turns red. After being gone for a long time, Tembo goes looking for him, and after returning to camp without Stark, is asked if he found him, so Tembo replies "Just the parts they didn't like". 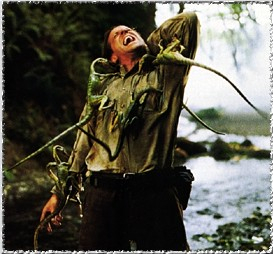 Dieter lost in the woods before he finds the compys. 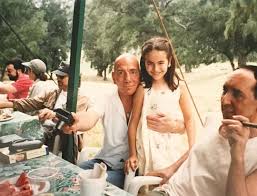 Dieter Stark and fellow hunters with Camilla Belle as the young spoiled Cathy Bowman behind the scenes.