Fullmetal Alchemist: The Conqueror of Shamballa

Chairman of the Thule Society

Power-Hungry Nazi
Dietlinde Eckhart is the main antagonist of the film Fullmetal Alchemist: The Conqueror of Shambella. She is the leader of the Thule Society, who aims to reach into the world of "Shamballa" (her name for Amestris, Edward and Alphonse Elric's reality). With access to its "magic" (alchemy), Eckhart believes she can use the powers of "Shamballa" to aid in the successful takeover of the Nazi Party.

She was voiced by Kelly Manison.

During pre-World War II era Germany, Eckhart appears as an enigmatic figure who runs the Thule Society while clearly being driven by her own ambitions. With some knowledge of alchemy (referred by her as "magic"), she is introduced to Edward and Alphonse's father Hohenheim of Light (who was entrapped on this side of the Gate by Dante), eventually entrapping him as an unwilling adviser. She has her associates in the Thule Society hunt down Envy, trapped in his dragon form, in order to use him as the catalyst for the Gate theorized to lead into "Shamballa". In the meantime, she gives Hohenheim to be a literal chew toy in order to pacify the angry Envy. She also appeals to Edward's Roma associate Noa for help, the Roma helping under the belief that "Shamballa" would provide her sanctuary from her prejudiced reality.

Her first team is sent through the Gate, only to then return as corpses. Not deterred, she arranges for the second attempt using the rockets of Alfons Heidrich (Alphonse Elric's Earth counterpart), creating a massive aircraft to travel onto the other side. Using Envy and Hohenheim as sacrifices, Eckhart and her soldiers pass over through the Gate, only to be horrifically corrupted and mutated by the Gate Children within. This causes her to suffer a mental breakdown, leading her to become convinced that she must use her newfound alchemical abilities to destroy Shamballa, leading her Gate-corrupted soldiers into a war with the Amestrian military.

In the meantime, Edward is sent via rocket plane through the portal by Alfons who is tragically murdered by Rudolf Hess for his efforts. Aboard the craft, Edward uses his alchemy to combat many of her soldiers and destroys her weapons. He, now reunited with his brother Alphonse on the Amestrian side, confronts and does battle with Eckhart who declares that such bearers of a fearful and uncontrollable power such as alchemy should be destroyed. Nevertheless, she is defeated when Alphonse employs his ability to control suits of armor.

Returned to the other side, Eckhart is corrupted into a monstrous blob-like creature that attempts to kill Noa in a fit of rage. Maes Hughes' Earth counterpart, a police officer and Nazi sympathizer that often expressed racist sentiments regarding Noa to Edward, comes to her aid and shoots Eckhart dead.

Eckhart seems to be a soft-spoken woman. Though she is both ambitious and cruel. She seems to be disloyal to her Führer Adolf Hitler and will stop at nothing to achieve victory and to have her country restored to greatness and to overthrow Hitler to gain control of the world.

Ironically enough in real history after the Thule Society helped Hitler, he decided that he no longer needed their services - meaning that no matter how loyal she was to the Nazi, she was just a puppet and a pawn to Hitler and after she dies the Nazis moved on without her.

She also reveals to be very paranoid, as the reason for invading the world was, due to her believing that the human world is stronger, that they'll take advantage of their less advanced world and betray them. 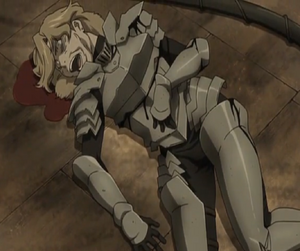 Dietlinde's death.
Add a photo to this gallery

Eckhart appears to be based on the real life figure Dietrich Eckhart, a possible leader of the Thule Party. An early key member of the Nazi Party, Eckhart aided in the attempted Beer Hall Putsch of 1923 (also an event portrayed in the film).

Retrieved from "https://villains.fandom.com/wiki/Dietlinde_Eckhart?oldid=3944326"
Community content is available under CC-BY-SA unless otherwise noted.