Lynn Driver (in the film)

Journalist at the London Orator
News reporter (in the film)

Advance his career by publishing headlines about Rowf and Snitter carrying the plague (formerly).

Rescue Rowf and Snitter and have them reunite with Alan Wood (succeeded).

Digby Driver (real name: Kevin Gumm) is one of the three main antagonists (alongside Dr. Boycott and William Harbottle) of Richard Adams' 1977 novel The Plague Dogs, and its 1982 animated film adaptation, where he is a female reporter named Lynn Driver. He is an unscrupulous journalist who works at a tabloid known as the London Orator and is responsible for spreading rumors about Rowf and Snitter carrying bubonic plague. However, he eventually redeems himself and helps rescue the two dogs when he learned the truth about Alan Wood being the owner of Snitter and how Ann Moss sold him to the A.R.S.E. research station.

She was voiced by Penelope Lee in the film.

When he was young, Kevin was raised in a broken family and he would often misbehave, even going as far as to break into an old widow's shop and threaten her with violence. Instead of learning from his mistakes, he only wanted to avoid getting caught by the police, as he believed that he should be free of discipline. As he grew up, he became a student of sociology and eventually decided to become a popular journalist as he adopted the name of Digby Driver.

Digby Driver is presented as a greedy and self-centered man who only posts headlines to advance his career, rather than to tell the truth. When he met with Stephen Powell and learned about Rowf and Snitter's escape as well as Dr. Goodner's defence work on bubonic plague, he decided to come up with a plan to write an interesting story to get more attention. When he blackmailed Dr. Goodner to reveal his details about his defence work, the ex-Nazi scientist informed him that his area is secured and that there is no way the dogs could have contracted the plague.

However, despite Goodner's advice, he went on to lie to the public by publishing an article about the two dogs carrying the plague in order to attract readers, causing mass hysteria in the public and leading to a witch hunt on the dogs. As he interviews Dr. Boycott and learns his motives for trying to ignore the fact that the dogs have escaped from their research station, he lashes out at the chief scientist for his negligence and reminds Powell about what he told him about Goodner's work.

After receiving a letter from Alan Wood about his loss of Snitter, he has a change of heart and confronts Ann Moss for selling the dog to the research station. He then shows Wood a photograph of Snitter and he helps him try to rescue Snitter as well as Rowf. After the two dogs were rescued, when William Harbottle and the Under Secretary try to have the dogs killed, he threatens to give them a bad reputation if they do so, showing how much he sympathizes with the dogs.

His female counterpart in the film is more affable and polite as she seems to care about other people as well as take more responsibility in her job. However, she still went on to carry out false rumors about the two dogs carrying the plague, despite being told by Tyson that Dr. Goodner's area was secured.

He was born in the late 1940s after World War II and was named Kevin by his mother, Mavis, though his name wasn't officially christened as Kevin. Before birth, his father abandoned him and his mother left him in the care of his grandmother, who was unprepared to raise him. One day, he was sentenced to juvenile court at the age of ten for breaking and entering an old widow's shop and threatening her with violence. However, this only gave him the idea that children should be free of discipline.

As he grew older, he became a dread against university authorities and eventually departed from his university to get a small job in journalism at the London Orator, a tabloid run by Ivor Stone, where he practiced journalism for five and a half years. In Copenhagen, Denmark, he got material for special features on pornography and sexual night clubs, that he was given the new name of Digby Driver by the Orator's readers.

After Snitter accidentally kills a Jewish businessman named David Ephraim, the Department of the Environment learn about the incident and debate on how to deal with the matter. They suggest on sending Digby Driver to investigate and a bureaucrat named Desmond Simpson reports Ephraim's accidental death to Driver.

After a scientist named Stephen Powell failed to retrieve Snitter from the Dawsons when the Tod helped him escape, Driver comes to the Dawsons' residence and interviews with them about the incident. Driver and Powell then head to a bar and Powell details the experiments that were performed on Rowf and Snitter, while also explaining Dr. Goodner's defence work on bubonic plague.

After publishing an article about the incident at Dawson's, Driver heads over to the research station. He meets up with Tyson and he directs him to Dr. Goodner's place. Driver blackmails Goodner into revealing details about his work, to which the former Nazi scientist does and Driver promises that he won't publish articles about his experiments. Driver later receives a call from Bob Taylor, who has spotted Snitter crossing the Duddon valley recently. Taylor informs Driver about the abandoned coppermine and he then discovers traces of the two dogs at the mine. Two days later, he publishes a headline about the dogs carrying the plague, causing the public to go into a massive panic mode.

Later, he interviews farmer Dennis Williamson, who explains that the research station wouldn't tell him anything about the lost dogs. Driver then calls Mary Longmire and decides to head to the laboratory. He then posts another article about the A.R.S.E. keeping a secret about their dogs.

Later, he meets up with Ann Moss, who was responsible for selling Snitter to the research station and conducts an interview with her. She reveals Snitter's name, who was owned by her brother and claims that he had an aggressive nature. He asks her why she sold him to the A.R.S.E. and she claims that it was her brother-in-law's idea. The next day, he posts an article about Moss and how she sold Snitter to the research station.

After the two dogs raided Geoffrey Westcott's car, Driver receives a report from Westcott about the incident. Westcott takes photographs of the dogs and Driver agrees to meet him. He then interviews Westcott and reports the incident of the dogs raiding his groceries. He later learns that Powell was forced to suspend his job after becoming sick and is offered an interview with Dr. Boycott in two days.

After Powell recovers, Driver comes to the research station and interviews Boycott about his experiments and the missing dogs wreaking havoc across the Lake District. Driver then lashes out at Boycott for his negligence and the two scientists argue with him for posting false information about the dogs. Driver reminds Powell that he told him about Dr. Goodner's defence work, but Powell denies it. Boycott receives a call and Powell picks up the phone. Powell learns about the incident of Geoffrey Westcott's death and puts down the receiver. He then convinces Boycott that they should have a talk outside after Rowf's shot-off collar confirmed that the dogs were indeed from the research station and they leave the room. Driver then leaves the laboratory and heads to the police station before he eventually posts a news article about Westcott's death and how Boycott denied any awareness about the missing dogs.

He later receives a call from a bureaucrat named Quilliam Skillicorn and learns that William Harbottle deployed the 3rd Battalion of the parachute regiment to exterminate the dogs. While the two dogs are being hunted by the army, Driver receives a call from a man named Ted Springer and heads to Eskdale. Upon arrival, he meets up with a reporter named William Williamson, who informs him that Major John Awdry and his army are on the fells.

Driver notices a letter that was written six days ago and reads it. He is shocked to see that it was written by Snitter's master, Alan Wood and realizes that he survived the accident. He then heads over to Ann Moss' house and confronts her for her deceitful actions. He interrogates her about why she sold Snitter to the research station and she explains that she hated the dog. He leaves the house and heads to the hospital where Wood is. He sees Wood and hands him the photograph of Snitter. Wood recognizes Snitter and Driver agrees to help him find Snitter. They head out of the hospital and they come across the warden of the Drigg nature reserve, Major Jim Rose. Major Rose directs them to Ravenglass and they head over to the nature reserve. However, upon arrival, Major Awdry tells them that the dogs are swimming out to sea and they spot them with his binoculars and are informed that there is nothing they can do.

Before the two dogs could drown at sea, two naturalists named Peter Scott and Ronald Lockley rescue the dogs and haul them onto their boat. They head over to the Drigg nature reserve, where they are happily reunited with Wood. Hot Bottle Bill and the Under Secretary arrive to have the dogs shot and Major Awdry is reluctant to do so, but Major Rose confronts him and orders him to leave, telling him he has no right to be here and that it's illegal to bring guns to his nature reserve. Harbottle refuses to leave until Driver threatens to give him a bad reputation if he kills the dogs. Harbottle orders the Under Secretary to deal with the matter, but Rowf chases him away and they flee in their motorcar as Driver takes photos of them, while shouting with joy. Wood and the two dogs leave the beach as Driver and Rose help him on the way. Driver explains that he hasn't felt on anyone's side in years and that he will humiliate Harbottle even more than Boycott as he gazes at the beach. 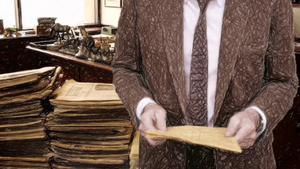 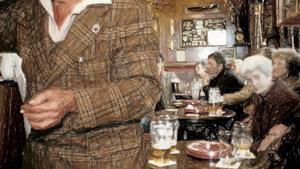 Digby Driver at a bar. 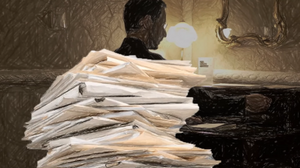 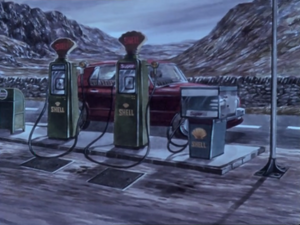 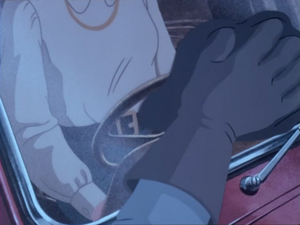 Lynn Driver talking to Vera Dawson in her car. 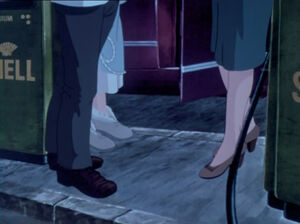 Lynn Driver interviewing with Stephen Powell and the Dawsons. 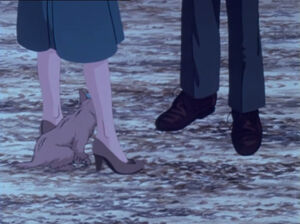 Lynn Driver having a conversation with Powell. 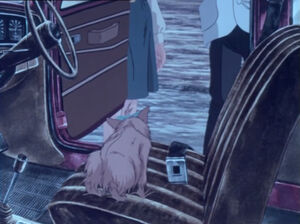 Lynn Driver offering Powell a ride back to the research station. 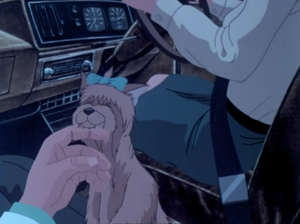 Lynn Driver driving Powell back to the research station. 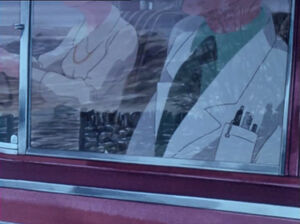 Lynn Driver being informed by Powell about Rowf and Snitter's experiments. 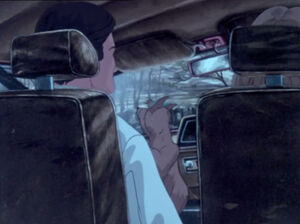 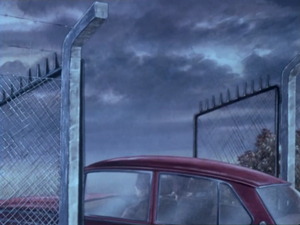 Lynn Driver drops Powell off at the research station. 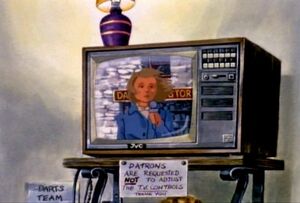 Lynn Driver broadcasting about the incident of Snitter's escape. 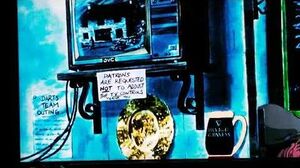 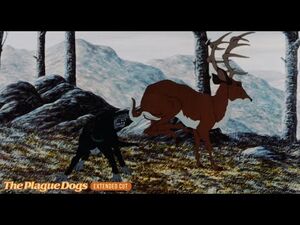 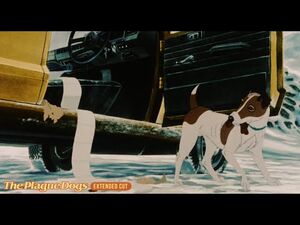