Digger the Dermatophyte is a villainous character created by the medicinal company Lamisil in a campaign against fungal nail infections.

Digger appeared in advertisements for the company in which he would introduce himself to the viewer as an infectious creature who would then explain his intentions. After this he would search around for feet to invade and infect in order to make a home for himself whilst explaining to the viewer how difficult it was to get treatment for infections such as himself.

In one ad he did this by peeling back a man's toenail, squirming inside them and spreading his infectious germs everywhere damaging the interior of the man's toe and invited various other infectious creatures to join him.

In another ad he explored a beach and demonstrated further power by squirming around the wet feet of sand dwellers and tourists in order to spread Athlete's foot around the people.

In both insistences however Digger was forced to flee as a result of discovering the victims were using Lamisil tablets although presumably still wanders around looking for more victims to prey on.

Digger is a hideous yellow creature with a tail, slender limbs and torso, three toes and fingers, sickly purple spots on his back, misshapen teeth and menacing eyes. His nails are also sharp, purple and thick.

Digger is a somewhat polite and charismatic individual however he is also incredibly sadistic and self-absorbed uncaring of the damage he inflicts on the health of the humans he infects and only wishing to make comfortable homes for he and his fellow infections. 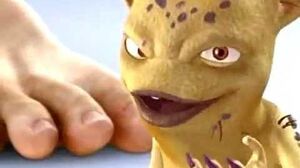 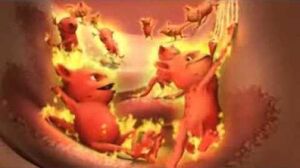 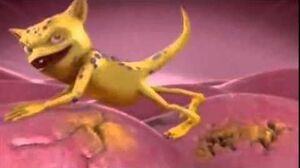 Stepwise - Freddy the Fungus (2005, UK)
Add a photo to this gallery

Retrieved from "https://villains.fandom.com/wiki/Digger_the_Dermatophyte?oldid=3459072"
Community content is available under CC-BY-SA unless otherwise noted.