He was voiced by Jin Horikawa (Digimon Adventure continuity) and Rie Kugimiya (Digimon Ghost Game) in Japanese and Derek Stephen Prince in English.

A Digitamamon was first seen running a diner with Vegiemon as he forced Joe and Gomamon work off their bills as they lacked the only currency he would accept, American dollars in the Japanese version and Digi-Dollars in the English version, especially since Joe had the currency before it got stolen from him. Matt arrives to help Joe work off his bill and to ensure his safety when Digitamamon made a threat about "accidents" after DemiDevimon paid him to keep Matt from leaving. DemiDevimon also makes Matt think Joe is deliberately causing accidents to drive a wedge between, with Matt eventually losing this temper at Joe. When Tai, Agumon, T.K. and Patamon found them, Matt decides to leave. Digitamamon, knowing he'll lose money, grew large and attacked. Vegiemon grabbed T.K. and held him by his ankle; Joe daringly jumps on Veggiemon, which freed T.K. and proved his reliability. Matt was stunned at how Joe tried to protect T.K. even after he yelled at him. Matt's thought of friendship allowed Garurumon to Digivolve to WereGarurumon and sends Digitamamon flying.

Three years later, Digitamamon sets up a new restaurant near the lake where he ends up causing trouble for Yolei when she and her friends visited his establishment, with Mimi and Palmon appearing with Michael and Betamon to defuse the situation by paying the gang's bill. T.K. then recognized Digitamamon due to the circumstances being similar to the events that forced Joe and Matt to work for him. But Digitamamon explains that he became changed person from the ordeal and waives the bill with only Yolei skeptical that he turned over a new leaf.

When a Gorillamon under the control of the Dark Spiral attacked, Digitamamon threw himself in front of the DigiDestined and was sent flying. After Gorillamon was freed, Digitamamon rolled back. But this time, he had an unseen Dark Spiral in his shell and it regressed him to his evil self. When Halsemon, Flamedramon and Digmon's attacks couldn't get through his shell, Mimi tried to convince Digitamamon that he wasn't evil, but Digitamamon tackled her. That made Yolei angry with her rant over trying to be sincere activated the Digi-Egg of Sincerity. Halsemon De-Digivolved to Hawkmon and became Shurimon. Shurimon used the shuriken on his back to keep Digitamamon's shell open as Pegasusmon and Nefertimon trapped him. Shurimon used his Double Star attack and destroyed the Dark Spiral, freeing Digitamamon from its influence.

Digitamamon is the main antagonist of episode 26, originally Angoramon's best friend in the Digital World. But upon coming to the real world, Digitamamon finds himself consumed by a need to devour human souls as he ate the residents of a house he made his lair. When Digitamamon reunites with Angoramon, his behavior becomes increasingly erratic before trying to eat Ruli once the two were alone. A battle soon ensues with Digitamamon was defeated by Canoweissmon, followed by SymbareAngoramon killing his friend as a last resort and as a mercy kill.

Digitamamon is an Ultimate Class Digimon, being roughly the height of a nine-year old. He lives in an egg that reveals his yellow eyes and green dinosaur-like feet. The rest of his body isn't revealed. 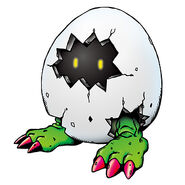