Villains Wiki
Register
Don't have an account?
Sign In
Advertisement
in: Thief, Cowards, Servant of Hero,
and 31 more

DuckTales the Movie: Treasure of the Lost Lamp

Dijon is the secondary antagonist in Disney's 1990 animated film DuckTales the Movie: Treasure of the Lost Lamp. He also appeared in the DuckTales TV series. He is Merlock's sidekick.

In the Ducktales 2017 reboot, he was renamed as Faris D'jinn and made his debut in the Season 2 episode Treasure of the Found Lamp!, but is portrayed as a protagonist instead of an antagonist as he is an adventurer instead of a thief. In addition, he is more competent and aids the other heroes in their adventures than his villain counterpart.

He was voiced by the late Richard Libertini in the film, and by Omid Abtahi in the reboot.

DuckTales the Movie: Treasure of the Lost Lamp

In the beginning of the film, Dijon works for the wealthy adventurer Scrooge McDuck as a hired guide to find the magic Lamp inside an ancient Middle Eastern pyramid belonged to the mythical thief Collie Baba, but Dijon is actually in service to his villainous master Merlock, who wants to reclaim the magic lamp stolen from him by Collie Baba so that he can recombine the lamp with his green magic talisman for himself once more. For much of the film, Dijon plays the role of comic-relief villain, with a running gag being the frequent loss of his pants.

Later in the film, Dijon obtains the lamp and becomes Gene the Genie's new master (on Gene's suggestion, as he does not want to be taken back to Merlock), then wishes for Scrooge's Money Bin to be in his possession. When Scrooge finds Dijon in the Money Bin and confronts him about Gene, Dijon summons the bin's security guards to eject Scrooge from the premises. After Merlock puts the talisman on the lamp, he notices Dijon under the rug and wishes for Genie to turn the poor thief into a pig before later wishing that gene the genie transform the Money Bin into Merlock's creepy flying palace. He is later turned back to normal after Merlock's defeat.

In the end of the film, Dijon attempts to escape the Money Bin after filling his pants with gold coins. Scrooge spots him and chases Dijon into town, screaming "Somebody, stop those pants!".

In the series' final episode "The Golden Goose", Dijon encounters Scrooge in a marketplace in India, but he ends up getting chased away by Scrooge and hides in a nearby temple. Inside, he meets with his brother Poupon, leader of the Brotherhood of the Golden Goose, and is put in charge of guarding the priceless relic. However, Dijon's greed gets the better of him and he steals the goose, triggering a chain of events that ultimately threatens to petrify the entire planet into gold. In the end, the crisis is averted and Dijon seems to have learned his lesson not to steal, but Scrooge ends up chasing him again when he learns that Dijon nabbed his watch.

Dijon is renamed as Faris D'jinn in the reboot. Unlike the original 1987 series, D'jinn is not a villain, but is instead an ally of Scrooge McDuck. He makes his debut in Season 2's Treasure of the Found Lamp!. Furthermore, he is much more competent than his villain counterpart, and is not only friends with Scrooge McDuck and his family, but also serves as an ally to them, even aiding them during these adventures. 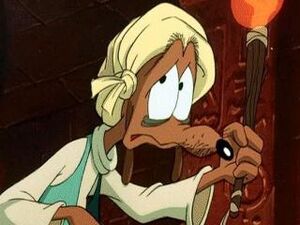 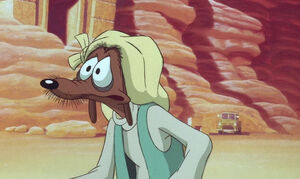 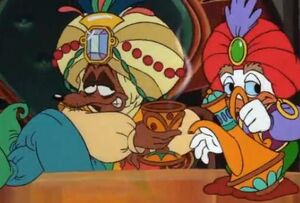 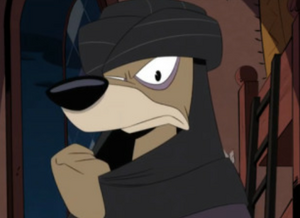 Faris D'jinn in the reboot episode, Treasure of the Found Lamp! 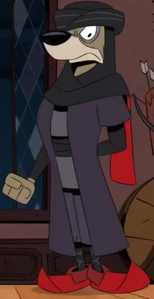 His full body in the reboot