Enigmatic Entity
The Dilly Dally Ghost is the main antagonist of Klay World: Klay Kamping. He is a supernatural entity who goes around and searches for dilly dalliers and punished them.

He is the same size as a normal Klayman, but appears to be white, most likely due to being a ghost.

Nothing is known about the Dilly Dally Ghost's nature, but he seems to be stoic, as he finds one of the campers' jokes funny without even laughing, meaning he has a calm and collected personality.

It is said by other Klaymen that if someone dilly dallies at night, then the Dilly Dally Ghost comes to punish them and punch them in the noggin.

When three Klaymen go out camping at night, they started to dilly dallying. The Dilly Dally Ghost learned that the three Klaymen were dilly dallying, he arrives and starts to destroys Mother Nature. The ghost eats the tree and throws a rock at one of the Klaymen, Miles, through his head, killing him in the process. The Dilly Dally Ghost then warns the other two Klaymen they were about to get "the fist".

Before the ghost can carry out this out, one of the campers told a joke related to a robot/centipede. The Dilly Dally Ghost claims the joke was the funniest thing he had ever heard, even without laughing. The ghost then pulls out a gun and committed suicide. 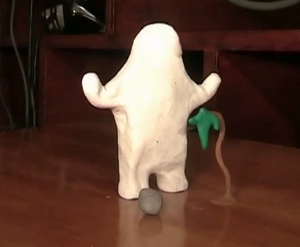 The Dilly Dally Ghost preparing to destroy the Mother Nature. 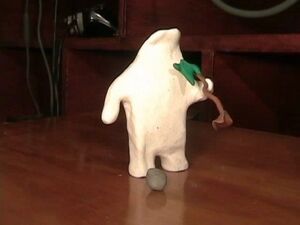 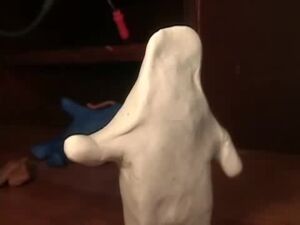 The Dilly Dally Ghost telling the campers that he not going to kill them.
Add a photo to this gallery 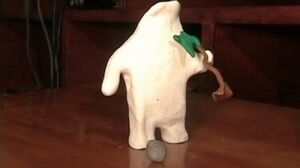 Klay World Klay Kamping
Add a photo to this gallery

Retrieved from "https://villains.fandom.com/wiki/Dilly_Dally_Ghost?oldid=3446131"
Community content is available under CC-BY-SA unless otherwise noted.