Leader of the Dimaria Squad

Dimaria Yesta is a minor antagonist in Fairy Tail. She is a member of the Spriggan 12.

She is voiced by Natsumi Fujiwara in the Japanese version and by Meli Grant in the English version of the anime.

Dimaria is a blonde woman of average height. She wears a cloth to cover her breasts, an armor to cover her right shoulder and arm, some pants and sandals.

During the second half of the Alvarez Empire arc, she wears a blue skin-tight suit to cover her body with an armor to cover her arms and legs.

Dimaria seems to have a cool, relaxed, and cynical personality, usually sporting an amused expression accentuated by a wry smile alongside half-closed eyelids. Her demeanor compliments this, being informal in the presence of superiors and colleagues alike. In keeping with her personality, she has quite the sharp tongue, which she frequently employs to make scathing and opprobrious remarks, as well as to needle others in a roundabout manner, although she is not too fond of dealing with tiresome people. She shows very little concern for her colleagues' well-being and has exhibited blatant signs of schadenfreude in regards to teammate Brandish μ, whom Dimaria delights in teasing.

Dimaria's bearing on the battlefield is fitting for that of a warrior. She not only exhibits great composure, handling potentially irritating situations with great aplomb, but is also quite a ruthless and vituperative individual as she refuses even children any hint of clemency. While she is keen to toying around with any opponents who catch her fancy, her mischievous and playful nature is tempered by a sense of caution which allows her to prioritize duty over pleasure. Despite her somewhat irresponsible and frivolous personality, Dimaria takes pride in her position as a Shield of Spriggan and vows to strike the fear of their power in the minds of her enemies.

However, Dimaria's unexcitable and calm attitude on the battlefield is a consequence of her confidence in attaining victory due to the nature of her Magic. When the world is under the influence of her Âge Seal, she claims absolute authority over it and has no qualms in gloating over her enemies, assured that she would not be wasting her time. This cool facade is shattered the moment somebody is able to oppose her in this timeless domain, the proud Shield of Spriggan betraying blatant signs of disorientation and frustration and petulantly denouncing all who dare defy her in her own world. She views her defeat with utter disbelief and, when held captive, is extremely vulnerable to exposing her emotions.

When Dimaria fuses with Chronos, her personality is influenced by the God's own. Her manner of speech becomes archaic and her tone haughty. She also loses her sense of patience, quickly wanting to decisively take care of opposition without delay, even wearing a grin on her face when deliberating the torture she plans to deal upon them. She seemingly considers it in her divine right to pass judgment on all those who go against her will and punishes them as she sees fit, the greatest sin in her eyes being that of a mortal offending a God.

Dimaria is also shown to have a remorseful side to her personage, seen when she hugged and apologized to Brandish for the cruel comments made about her capture, determined not to ever do it again, and showing worry for her safety after it had happened. Dimaria also has a habit of clicking her teeth when she is angry and furious about something occurring not to her liking.

Along with three other members she greets the emperor. She also appears during the meeting. During the Invasion she along with Neinhart and Wahl appears in the south. She is seen with Wahl on a ship who tries to destroy the Fairy Tail building and is stopped by the ship Christina.

While Neinhart stays on the ships and Wahl takes some fighters out with his missiles, she overwhelms Kagura and strips her some after. One day later she is confronted by Wendy and Sherria with the former kicking her in the face. She tries to kill Wendy, but fails and gets another kick in the face. Then it turns out Ultear took Wendy and Sherria to the realm with the stopped time.

She then enters her God Soul overwhelms Wendy, but is defeated by Sherria, who used Third Origin. She is then captured by some of the forces. After Irene used Universe One she tries to escape and fails, but is saved by Larcade Dragneel. Some later she along with others appears during the meeting of the Spriggan 12. She then sees Brandish negotiating with Natsu and Lucy and after seeing Brandish holding back and is angered at her betrayal.

Dimaria cuts Brandish down and kidnaps Lucy and Natsu. She humiliated Lucy by stripping her and threatens to do the same to Natsu (unaware he is the brother of her Emperor) but sees he is unconscious. After Lucy shouts her defiance, Dimaria tries to gouge Lucy's eyes out. However, she was unprepared for the awakening of E.N.D. who could move freely in her time freezing Magic. She is defeated with ease and is left traumatized by the demon's power barely being able to tell Lucy what attacked her. She is restrained after Brandish explains her magic power.

Dimaria spoke up to tell the Fairy Tail Mages that Natsu is a demon, after they note on his odd tumor. She tells Lucy that she does not know everything about her supposed friend.

After Universe One dispels, she shrunken by Brandish and Dimaria retains her fear of Natsu as shown when she got scared at the sight of him. She is soon carried away back to Alvarez in Brandish's hand. 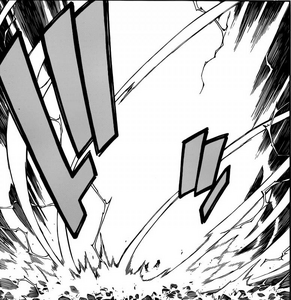 The result of a magical attack by Dimaria.