Use the Chaos Heart to destroy the multiverse and create a new one for himself to rule (failed).

Dimentio (in Japanese: ディメーン, Dimēn) is a harlequin magician and the main antagonist of the 2007 Nintendo Wii video game Super Paper Mario. He starts off as one of Count Bleck's minions, and fights Mario and his allies several times during their quest to stop the Chaos Heart and the Void before eventually betraying his boss and revealing himself as the real mastermind, having played both sides in order to usurp control of the Chaos Heart and destroy and remake the multiverse in his own design.

Dimentio is perhaps one of the most egotistical, sadistic, cunning and cruel of Mario's enemies. Residing in the shadows of Count Bleck's army, Dimentio carefully plans and executes his scheme to take control of the Chaos Heart. He plans to use its destructive power and purpose to destroy all worlds and create brand new ones to control and rule over. In Count Bleck's minionship, Dimentio waits for Bleck to create the Chaos Heart and form the Void.

He is also shown to be very twisted, ruthless and diabolical in his own way, as he likes to make fun of others, especially Mario and his allies, even when he is committing pain to his enemies throughout the game.

Dimentio is also consistently described as manipulative, delusional, psychotic and insane, this is shown when Mario, Bowser and Peach destroyed Super Dimentio, freeing Luigi and defeating Dimentio, he left behind a shadow of his power to keep controlling the Chaos Heart in order to bring the destruction to all the dimensions now knowing that he will not rule any dimension. With the destruction of all worlds upon them, Count Bleck and Tippi proclaim love towards one another, then seal the Chaos Heart away.

Apparently, Dimentio approached Count Bleck on his own at first, offering to serve him. However, Bleck turned him down. It was only after reading about him in the Dark Prognosticus that he allowed Dimentio into his forces. Dimentio is seen with O'Chunks, Mimi, and during several of the meetings with Bleck's henchmen. Even before betraying the Count, he holds disdain for all of Bleck's other followers. He takes every opportunity to mock his fellow minions over their failures and even persuades them to disobey the Count's orders on one occasion.

Dimentio eventually learns that Bleck has a more emotional side when he eavesdrops on him and Nastasia talking. Dimentio also learns of Tippi's connection to him and uses this to weaken Bleck emotionally to make him easier to defeat.

Encounters with Mario and company

Mario's first encounter with Dimentio comes before fighting the Chapter 1 boss: Fracktail. Initially, Fracktail is only a security device meant to deliver the Pure Heart to the legendary Prognosticus Hero, but Dimentio appears and threatens Mario before using his magic to turn Fracktail on the plumber. This results in Mario having to destroy Fracktail.

In Chapter 3-3, Dimentio fights Mario, Peach, and Bowser himself near the top of the Dotwood Tree, transporting himself and the party to Dimension D, a creation of Dimentio's meant to multiply his power by 256 times. The plan backfires when Mario's power is amplified as well and defeats Dimentio. However, Dimentio was merely testing the heroes, to see if they had the potential to fight Bleck.

Dimentio later encounters the party in the Floro Sapiens' lair of Chapter 5, where he uses a Floro Sprout to brainwash O'Chunks into a more powerful "O'Cabbage" who randomly shouts the names of vegetables.

After Bleck successfully destroys Sammer's Kingdom, the setting for Chapter 6, Dimentio appears before a distraught Mr. L (Luigi) and supposedly "kills" him in a magical explosion. He then appears before Mario's party in Merlon's house and appears to in the same manner. Mario and his party are sent to The Underwhere (The Hell of ended games), but are reunited with Luigi and able to return to Flipside with the approval of Queen Jaydes.

As the heroes prepare to head to Castle Bleck, Dimentio, along with O'Chunks and Mimi, decide to head off into the castle and prepare for their arrival, but not before revealing to Count Bleck that he knows his original name, Blumiere, saying that Mario's Pixl said "I must stop Blumiere...", confirming Count Bleck's suspicion that Tippi is actually Timpani.

Dimentio serves as Luigi's final boss in Castle Bleck, with hundreds of Dimentio clones appearing throughout the mirror halls in Chapter 8-3. He forces the Mario Bros. to play "tag" by chasing him through all seven areas of the game. After the Brothers catch him, Dimentio reveals his intentions to betray Bleck and asks Mario and Luigi to join him. However, agreeing results in a game over after Dimentio brainwashes the brothers with a Floro Sprout. When the brothers refuse his offers, he insults Luigi's mustache, leading to a one on one clash between the two. When Luigi defeats Dimentio, the twisted jester acknowledges his power and pretends to blow them both up in a magical explosion, knocking Luigi unconscious to keep "the man in green" out of Bleck's "velvet-lined gloves".

Luigi survives, however (as does Dimentio), and returns to Mario just in time to face Count Bleck. After Mario and his party defeat Count Bleck, Dimentio appears and fires a lethal shot of energy at the Count in a final attempt to kill him, but Nastasia jumps in the way to absorb the blast and is seemingly killed instead. Dimentio then he seizes the Chaos Heart for himself, thinking that the Pure Hearts were drained of their power, and transforms himself and Luigi into Super Dimentio. He banishes Count Bleck, Nastasia, and Tippi to Dimension D.

Like the final bosses of the previous two Paper Mario games, Super Dimentio is invincible at first, but Tippi, Count Bleck, O'Chunks and Mimi are able to use the power of the Pure Hearts to negate this invincibility. Super Dimentio has 200 HP, but Mario, Peach, and Bowser were able to defeat him. Dimentio was reduced to just ahead but left behind a shadow of his power to control the Chaos Heart. With a final "Ciao" Dimentio was killed in an explosion, leaving only Luigi and the Chaos Heart, which threatened to destroy all dimensions. Dimentio's final plan was ultimately foiled by Tippi and Count Bleck, who used the power of the Pure Hearts to destroy the Chaos Heart and the Void, in the process vanishing without a trace; possibly to a paradise dimension in their original forms.

After Mario and Luigi catch Dimentio, he reveals his intentions to betray and defeat Count Bleck and asks Mario and Luigi to join him. Tippi tells to Mario to not accept Dimentio's offer because he could plan something even worse than they thought, and if the brothers continue agreeing, Dimentio will finally complete the deal, while Tippi (feeling betrayed) will abandon Mario and Luigi, now that they are on Dimentio's side. Upon agreeing, however, Dimentio promises to Mario and Luigi to give them enough power to defeat the Count. But instead of that, he brainwashes them with two Floro Sprouts.

Dimentio finally mocks Mario and Luigi and orders them to defeat the Count as he will create a "new world" for everyone. Then, the final scene results in a Game Over.

In Merlon's reciting of the Light Prognosticus, he recites something along the lines of "and the dark one will use the Chaos Heart to end all worlds". While Count Bleck does attempt to accomplish this goal and is a member of the Tribe of Darkness, Dimentio is the villain worthy of the title.

Dimentio is apparently "The Dark One" mentioned in the Dark Prognosticus as opposed to Bleck. If Bleck read this in the Prognosticus, he might have intentionally enlisted Dimentio's help in order to ensure his successful suicide and destruction of the universe. However, Dimentio eventually turns on Bleck and starts trying to thwart Bleck's plans. He casually begins to help Mario along and even tries to convince the party to join him. Bleck wants to end all worlds in order to end his own life, whereas Dimentio wants to end all worlds in order to become king of a universe of his own creation. Their difference in motive is the reason Dimentio gives for betraying Count Bleck. However, it is also possible that Dimentio only feigned allegiance to Count Bleck in order to obtain the Chaos Heart.

Dimentio appears in Super Smash Bros. Ultimate as a Primary Grap-type Spirit. His ability reduces the fighter's weight, making them more nimble, but easier to be launched. His Spirit Battle is against Meta Knight and a giant Luigi (representing Super Dimentio); the latter of which has increased attack power and can crush the player by falling on them.

Dimentio has features of a jester, a clown, and a magician. He wears a court jester costume with clownish colors (purple and yellow), and he has great prowess in magic tricks. Dimentio's face is also a Comedy Mask, which is a classical theatrical mask used in plays.

Dimentio's character design resembles a stylized version of the Jesters from Super Mario RPG: Legend of the Seven Stars. He also closely resembles Harley Quinn, another jester character from the game Wario's Woods, and Super Dimentio's spinning cape imitates that of Harley. His face also resembles that of a Phanto from Super Mario Bros. 2. This could mean he is a Jester/Phanto hybrid. His face also looks similar to Piedmon, who is also an evil jester character from Digimon.

Dimentio possesses many powers and abilities. His most common ability is where he shoots out star-like projectiles. He can also create forcefields and make his victims explode. Dimentio can also clone himself and turn invisible. Rather than walking, Dimentio always hovers in the air. Dimentio can teleport through space and even to other dimensions.

As Super Dimentio, the jester's powers are immensely boosted. He can create platforms that shoot bullets at his enemies and call forth the Void, a black hole that destroys dimensions and universes. Super Dimentio can also grant life to inanimate, non-sentient objects. Lastly, if Super Dimentio is destroyed, a small piece of Dimentio's power is left behind to tear apart universes, even if Dimentio is dead. The process can only be cancelled by true love in conjunction with the Pure Hearts. 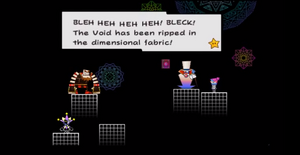 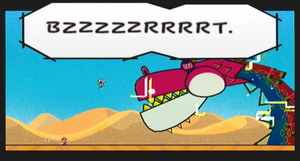 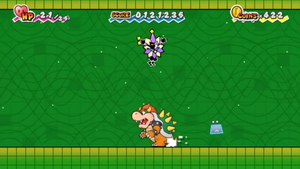 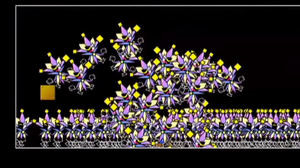 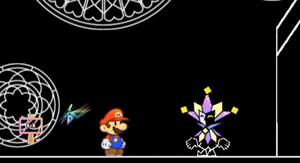 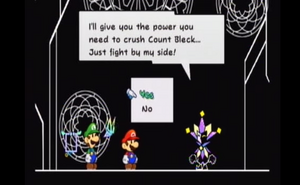 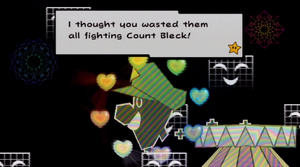 Super Dimentio during the final battle. 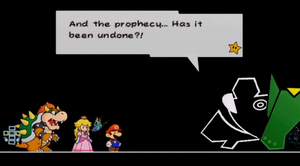 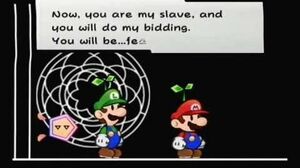 Retrieved from "https://villains.fandom.com/wiki/Dimentio?oldid=3070066"
Community content is available under CC-BY-SA unless otherwise noted.