The Devil in the Top Hat
Dr Alain Stahngun

Professor Layton and the Unwound Future

Save Claire.
Get revenge against Bill Hawks.

Dimitri Allen is the secondary antagonist of the video game Professor Layton and the Unwound Future. He is a scientist researching time travel and the leader of the Family, who acts as the evil Professor Layton of the future (also as Dr Alain Stahngun and the Barkeeper of "The Thames Arms"). He has succeeded in inventing the actual time machine.

He was voiced by Takaya Kamikawa in the Japanese version and Liam O'Brien in the English version.

Like Don Paolo, Dimitri Allen was in love with Hershel Layton's girlfriend, Claire. She was his lab assistant, back when he worked together with Bill Hawks. After they had built a time machine, Bill Hawks wanted to test it on Claire. Although Dimitri had found a flaw in the machine and didn't want Claire to get hurt, Bill still went on with the experiment, as he would get money from a cooperation. The machine exploded, Claire and some people in the building next to the lab died.

Dimitri was contacted by Clive Dove, whose parents had also died in the accident. They decided to get revenge on Bill, who had survived the explosion and build an underground replica of London to kidnap scientists and pretend they had travelled ten years into the future so that they would help build a time machine. While Dimitri only wanted to use the machine to save Claire, Clive used most of the scientist to build a giant war machine with which he would destroy London.

To find out the exact point of time he would have to travel to, he needed Professor Layton's memories. Therefore he decided to disguise himself as an evil future version of Professor Layton to lure him to his hideout, the Towering Pagoda in Chinatown in "Future London" with his right hand Bostro. He expected Layton to understand his motives, as his plan was about saving Claire, but the Professor told him that it is impossible to change the past. After a battle of wits, Dimitri left the tower.

When Professor Layton foiled his plans and discovered the secrets of "Future London" he told Dimitri that he was only used by Clive. Although he didn't want to believe that at first, Clive admitted and tried to destroy London. After he was stopped, Dimitri accepted that it's impossible to change the past and decided to end his research.

Although Dimitri set himself the noble goal to save Claire from her fate, without being able to see that the past cannot be changed, he later became more and more obsessed with revenge on Hawks. This made him resort to almost any means, apart from murder, as in his opinion his good will would justify his actions.

Despite lacking physical skills (which is why he relies on his minions to do the dirty work), Dimitri has great intelligence, being able to control the events in Future London from his tower, although he couldn't see through the fact that Clive, the real manipulator behind the scenes, was only using him. However, he still has great scientific skills, as opposed to Clive, since he was even able to solve the mystery of time travel. He is also skilled with disguises. 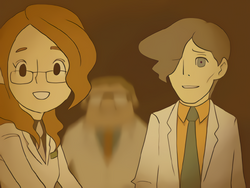 Retrieved from "https://villains.fandom.com/wiki/Dimitri_Allen?oldid=3305476"
Community content is available under CC-BY-SA unless otherwise noted.