Dimitri Lousteau was a member of the KLAWW Gang and the first boss to be fought in Sly 2: Band of Thieves, appearing as the main antagonist of Episode 1: The Black Chateau. Dimitri used his business, the Parisian Nightclub, as a way to feed illegal spice to the local population in addition to a cover for his forgery scheme which utilized Clockwerk's tail feathers. He later joined forces with the Cooper gang after somewhat reforming his criminal ways in Sly 3: Honor Among Thieves and Sly Cooper: Thieves in Time.

He was voiced by David Scully.

As a child, Dimitri learned English by mimicking music-videos. As such, he uses a lot of street-slang, metaphors and strange phrases while talking. He also tends to give people nick-names, such as calling Sly "cracker box". Dimitri is something of an opportunist, usually choosing whatever path or profession that works the best in his favor, with little concern for morals or principles. It was once stated by Sly that he has no honor as a thief, since he cares more about profit than challenges. This mindset is eventually though what caused him to join the Cooper gang, after he had seen how competent they were( Even though none of them really asked him to join them). His friendship with them grew stronger though, since they trusted him enough to give him The Thievious Racoonus and guard their hideout.

He also views himself as something of a ladies-man, as he tried to flirt with Penelope and is seen numerous times with multiple women.

Dimitri is an anthropomorphic marine iguana with purple skin and long, blue, hair. He usually sports an orange shirt with a green jacket and pants.

Dimitri grew up listening to stories of his grandfather, Reme Lousteau, recovering treasure from pirate ship wrecks. He learned English by listening to music videos and mimicking their speech.

His life of crime began when he was a passionate young art student. He developed his own style, dubbed "kinetic aesthetic," which consisted of him swinging back and forth from a rope tied around his waist and painting the canvas as he swung by. It was rejected outright by closed-minded critics and Dimitri was cast out of the art community. Angry with such, he began forging old masterpieces; his idea of punishing those with bad taste. At some point, Dimitri came into ownership of a nightclub located on the west-side of Paris, drawing in "young, chic patrons from far and wide," called the Parisian Nigthclub.

Later he and the Klaww gang robbed the Cairo Museum of Natural history where he was given Clockwerk's tail feathers. Turning the tail feathers into printing plates, he was able to counterfeit untold amounts of money. In coordination with fellow gang member Rajan, he funneled spice into his nightclub that may have been a front for his printing operation in the basement of the club.

Dimitri soon learned that Sly Cooper and his team had arrived in Paris looking to steal Clockwerk's tail feathers. After several acts of sabotage by the Cooper Gang, Dimitri ordered his guards to shoot them on sight. Dimitri's efforts to get rid of the Cooper Gang were proven to be unsuccessful when Sly confronted him in his printing press room. Dimitri tried to get Sly to leave him alone by bribing him, but Sly, befuddled by Dimitri's strange English, refused the bribe and insulted his suit. Enraged, Dimitri challenged Sly to a fight but was defeated when Sly knocked him into the printing press machine. Incapacitated, Dimitri could only watch as Sly took Clockwerk's tail feathers.

Dimitri was later arrested by Carmelita Fox and Constable Neyla and had his nightclub shut down.

Aftermath of Klaww Gang and Redemption

After his incarceration, Dimitri would later be recruited by the Cooper Gang and become a prominent member beyond the original three. Dimitri also later became a dance instructor on a cruise ship. However, for reasons unknown, Dimitri ended up in jail again and was kept in the Venetian police headquarters, under the watch of Carmelita Fox. During his time there, he was visited by Sly, who was looking for Murray (who had left the gang). Dimitri still held a grudge against Sly for ruining him and nearly got the police's attention. Cutting a deal, the two arranged for Dimitri to escape while Sly kept Carmelita busy outside. In return, Dimitri alerted Murray to the presence of his friends in Venice.

Dimitri was later entrusted with the Thievius Racoonus, the family history book of Sly as he aided the Cooper Gang as they traveled back in time. Dimitri was last seen hosting his own show called Disco Diver that shows off his scuba diving prowess and history.

Dimitri was skilled enough to fight Sly in hand-to-hand-combat, and showed amazing speed when retreating. His different weapon choice would later come to be in favor of the Cooper Gang as well.

It is unknown if Dimitri himself converted the tail feathers into a counterfeit money operation, but his art forgery skills could have led him to know the right channels for counterfeiting cash as well.

In Sly Cooper 3, he proved to be an excellent scuba-diver and showed remarkable marksmanship with his harpoon-gun, to the point where he could defeat a mutated sea-monster created by Dr. M. 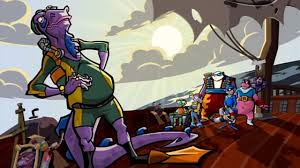 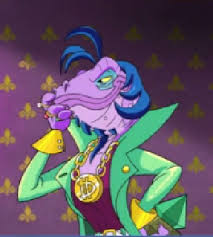 Dimitri in Sly Cooper 4.
Add a photo to this gallery

Retrieved from "https://villains.fandom.com/wiki/Dimitri_Lousteau?oldid=3668312"
Community content is available under CC-BY-SA unless otherwise noted.