Freedom fighter (formerly, as a human)

Tending to Grisha and teaching Zeke Eldian ways (as a human).

Eating humans (as a Titan).

Restore Eldians their freedom and inalienable rights (as a human, failed).

Murder (as a Titan)

Dina Yeager, neé Fritz, also known as the Smiling Titan, is a minor but significant antagonist in the anime/manga series Attack on Titan. She is the mother of Zeke Yeager, former stepmother of Eren Yeager and the Titan who killed Eren's mother, Carla, during the invasion of Wall Maria, driving Eren to take revenge against the Titans. She serves as a major antagonist in the Fall of Shiganshina arc and as the final antagonist in the Clash of the Titans arc. She also returns as a flashback character in the Return to Shiganshina arc.

5 years after their first encounter. Eren encounters the Smiling Titan again during his first fight with the Armoured Titan. She kills Hannes in front of Mikasa and Eren. Eren, who is by now a Titan Shifter, unknowingly uses the power of the Coordinate against the Smiling Titan, which works thanks to Dina's royal blood, and is devoured by other Pure Titans. Eren, the rest of the Survey Corps witness this as they escape the Armored Titan.

The life of this woman-turned-monster had been full of contradiction and tragedy that only ended with her death at the hands of Eren Yeager, who, after learning her origins, loses his hatred for her and the Titans and inspires his campaign against Marley.

She is voiced by Nozomi Kishimoto.

The "Smiling Titan" is 46–50 feet tall and it is shown to lack intelligence like other Titans in its class. Its main distinguishing feature is its characteristic grinning smile; in which its lips are fixed wide open, exposing its teeth and gums within at all times. In the anime, the white part of its right eye is a luminescent yellow color, reminiscent of heterochromia.

The Smiling Titan has a thin emaciated frame with stocky proportions, in which its ribs are visibly apparent, and it possessed an unusually long neck. It has medium-length dark hair that only barely reaches down its head. Though it is like many other Titans in terms of its instinct to seek out and eat humans, it is been shown to kill Carla before devouring her.

The "Smiling Titan" is the unofficial name of the Titan that was notable for killing Eren's mother, Carla Yeager, the new wife of her former husband during the invasion of Wall Maria.

Dina Yeager was Dina Fritz, a direct bloodline of the Fritz royal family; that makes Dina a distant relative of Historia Reiss of Reiss Family. She, along with her husband Grisha Yeager, was a core member of Elida Restorationists, an underground organization comprised of discontented Eldians within Marley seeking to overthrow Marleyan regime. Eventually, Grisha and Dina fell in love and married, giving birth to Zeke Yeager aka Beast Titan. Although she and Grisha attempted to raise Zeke as a loyal Eldian devoted to the restorationists' cause like they had, their teachings were too much for young Zeke who suffered identity crisis. It was fully revealed in chapter 114, that she and her husband Grisha indoctrinated their son Zeke very harshly to the point of brainwashing, never stop to think about how burdening their indoctrination must be for Zeke. Ultimately Zeke, urged by his mentor Tom Xaver and to save the lives of his grandparents as well as his own, betrayed his parents and tipped them off to Marleyan authority. Grisha and Dina were arrested and Eldian restorationist was purged in a single day.

Grisha and Dina, along with their fellow restorationists, were condemned to transformation into Titans and to kill fellow Eldians living in Paradis Island. Before she was turned into a Titan, Dina promised that she would find Grisha, no matter what she would become. Just before she was transformed, Dina smiled in acceptance of her fate, causing her Titan form to bear it's signature joker-like grin.

When the Colossal Titan breached through the walls of the Shiganshina District, many Titans proceeded inside and among such Titans was the Smiling Titan: Dina came to where Grisha lived, just like she vowed to him that she would, and immediately went after the house of her husband, where her stepson Eren and Grisha's new wife, Carla lived. It embarked inside the town and was witnessed by Eren and Mikasa as they tried to free Carla under debris. Though Hannes initially came to their aid and decided to face the Smiling Titan, he stood catatonic in fear of its frightening appearance. After Hannes realized that he was too afraid to face it, he opted to take Eren and Mikasa to safety, leaving Eren's mother behind. Afterward, Eren witnessed the Smiling Titan pull Carla out of the debris, as it proceeded to violently incapacitate her and devouring her thereafter. This incident, along with the other horrors of the attack on Shiganshina, would instill a hatred of all Titans within Eren.

During Eren's days training to enlist into the military, this incident is shown to have left a traumatizing impact on Eren. This was evident when he was approached by his fellow classmates about his impressions regarding normal Titans, in which Eren experienced a flashback of the Smiling Titan devouring Carla; associating normal Titans to the trauma caused by the Smiling Titan. He remains silent and is visibly shaken by the thought, until maintaining his composure in front of his classmates and shrugging it off as if he were unaffected by their questions.

Clash of the Titans arc/Season 2

5 years later, after Eren had already joined the Survey Corps, the Smiling Titan would appear again before Eren and Mikasa outside the Forest of Giant Trees during the military's pursuit of the Armored Titan, Bertholdt Hoover and Ymir, who had kidnapped Eren and Historia Reiss. After the Armoured Titan resorted to throwing the pure Titans in the Survey Corps' direction, the resounding crashes attracted the Smiling Titan's attention, and her appearance horrifies Eren and Mikasa. Hannes tries to fight the Titan off in an attempt to both protect Eren and Mikasa, and to make up for failing to stop Carla from being eaten. Unfortunately, the Smiling Titan manages to catch and then devoured him in a similar manner to Carla, right in front of Eren and Mikasa. After being encouraged by Mikasa, Eren, utilising his hatred and wish for her death, unknowingly activates the powers of the Founding Titan and punches her hand away just as she is about to grab him. The surrounding Titans, sensing Eren's desire/unknowing command for her death, attack the Smiling Titan and devour her, allowing Eren and Mikasa to escape and avenging Carla and Hannes.

After discovering the truth of his father, Eren unlocks the formers memories and discovers the truth about Dina, her son Zeke and the Titans themselves, and realizes they were just as much as victims as Humanity. With this, Eren abandons his hatred of Dina and the Titans (replacing it with pity and sadness, especially after discovering his relation to Dina herself) and sets out to destroy Marley, the ones who ruined all their lives.

Born as royal bloodline of Ymir Fritz, she spent her life dedicated to freeing her people, also living her full life as a spouse and as a mother. However, all of her diligent life came to a tragic end the moment she turned into a Titan: as a Titan she left a deep, profound psychological scar on Grisha's new family, slaughtering the very people she was once dedicated to saving, she died violently as a mortal enemy of her own people. However, other than Titan eating a Titan-shifter, there was no way Dina could return to being a human ever again. To make matters even worse, Grisha, the man whom she vowed to find no matter what, was no longer among the living after the Shiganshina disaster struck. She could've been forever condemned to search for the man who was no longer alive. So her death, violent and tragic as it was, was the only way to give Dina an end to her suffering 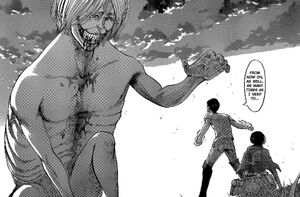 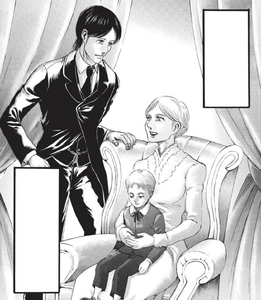 Dina with Grisha and Zeke. 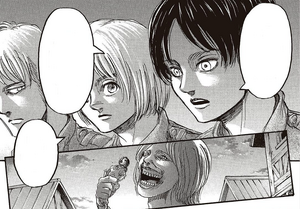 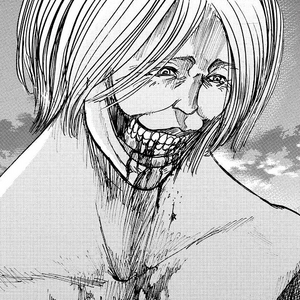 Dina as a mindless Titan. 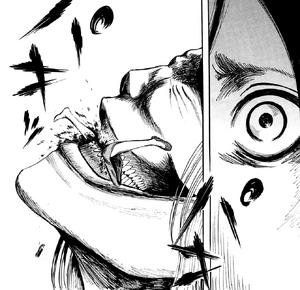 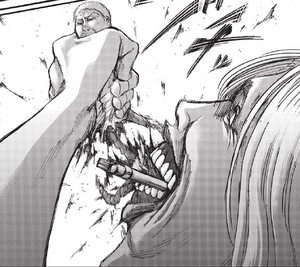 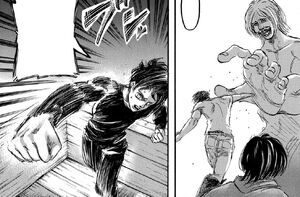 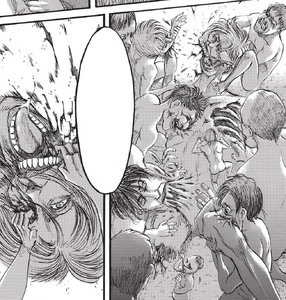 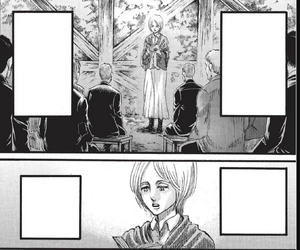 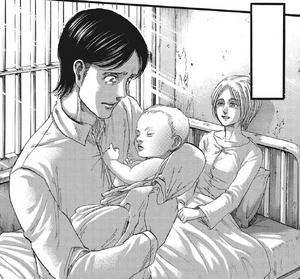 Zeke is born to Grisha and Dina 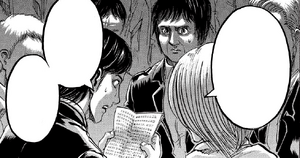 Dina among the Eldian Restorationists 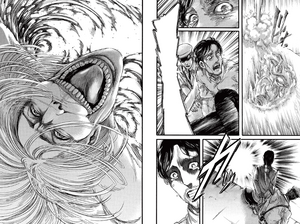 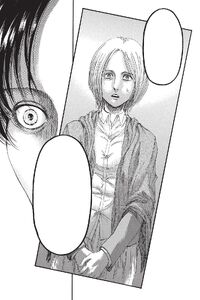 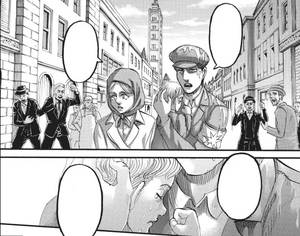 Grisha's family after being splashed at 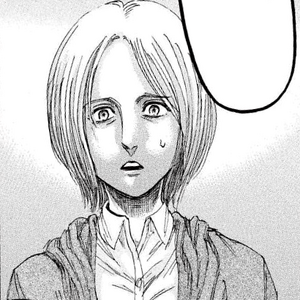 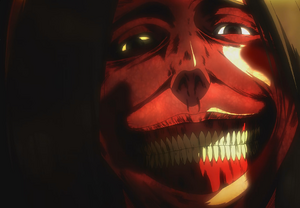 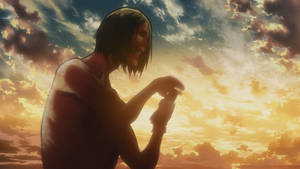 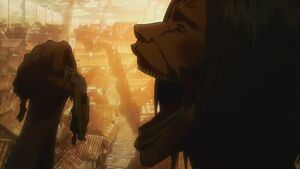 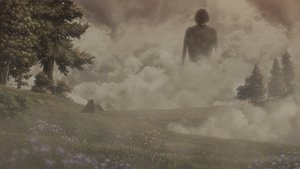 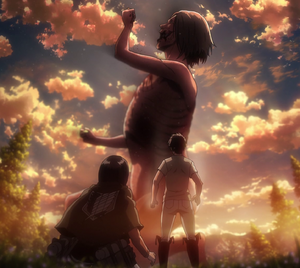 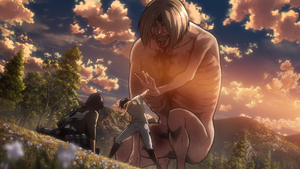 Dina's Titan is punched by Eren 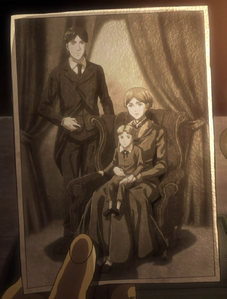 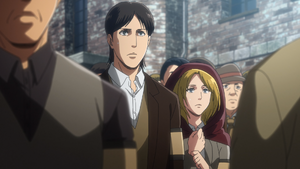 Retrieved from "https://villains.fandom.com/wiki/Dina_Yeager?oldid=4058539"
Community content is available under CC-BY-SA unless otherwise noted.