Burning things with his flamethrower

Get whatever he wants (both failed).

Dingodile is a supporting antagonist in the Crash Bandicoot video game series.

He is a genetically enhanced combination between a dingo and a crocodile, and also has a heavy Australian accent. His weapon of choice is a flamethrower.

Dingodile has the appearance of both a dingo and a crocodile, with his body shape being that of a crocodile, but it is covered in brown fur like a dingo. His tail is green, except in the Nintendo DS version of Crash of the Titans, and his eyes are usually brown, but were colored green in Crash Nitro Kart. Dingodile is approximately 2 meters (6 feet) tall and weighs about 95 kilograms, although he appears to have put on some weight in Twinsanity. His pants are usually beige or blue and he never wears shoes or a shirt. Dingodile is often equipped with a flamethrower, which is fueled by a large gas tank worn on his back. The flamethrower is occasionally traded for a water gun, seen in both Huge Adventure and Crash of the Titans for NDS. He is also known to attack with his tail.

It is generally assumed that Dingodile was created by Dr. Cortex, but some sources claim Dr. N. Brio to be his real creator. This may be one of the reasons for why Dingodile has no trouble betraying Cortex from time to time.

Dingodile debuted in Naughty Dog's third instalment as a supporting antagonist. He first appears during a cutscene of the second warp room area, warning Crash and Coco to hand over the Power Crystals or else. He then battles Crash during the Ice Age, where he nearly incinerates a baby penguin before Crash arrives to fight him. After being beaten, he claims to Crash that he'll "soon be up against much worse".

Dingodile returns as a minor antagonist in the Traveller's Tales' first instalment. He is first seen in the intro cutscene during Uka Uka's conference in the space station. He occasionally appears as obstacles for Crash to get past, and as a rival racer in the level "Smokey and the Bandicoot".

Dingodile returns as a supporting antagonist. He is first seen at Crash Bandicoot's "birthday party" along with Koala Kong, Pinstripe Potoroo, Ripper Roo, Oxide and Tiny Tiger. After Crash and Cortex both fell into a cavern, Dingodile and Roo both discuss lunch. He later appears in a wooden shack reading a book until a gigantic snowball containing Cortex and Crash falls onto it and destroys it. Dingodile survives and overhears Crash and Cortex's talk of the Evil Twins' Treasure. He then secretly follows them to the Academy of Evil. They then run into him in the boiler room where Dingodile asks about the treasure. Finding no answers, he sends Cortex flying and battles Crash. He is seen last unconscious in the boiler room. He is never seen after that.

In CTR, Dingodile appears as a playable racer. He can be selected in the adventure mode, where he is one of eight characters competing to stop Nitros Oxide from conquering the world.

In Crash Bash, Dingodile is summoned with a handful of other villains to assist in the battle between Aku Aku and Uka Uka. Since Uka Uka has too many allies, Dingodile and Tiny are moved to Aku Aku's side to even things out.

In CNK, Dingodile is hypnotized by N. Trance and races for his team in the Galaxy Circuit. Since Team Trance is allied with Velo, Dingodile appears as an enemy racer in the adventure mode and can be unlocked by completing a Gem Cup.

Dingodile returns in the remaster for Crash Team Racing serving the same role he had in the original game. He is a Speed class driver.

Crash of the Titans (Nintendo DS) 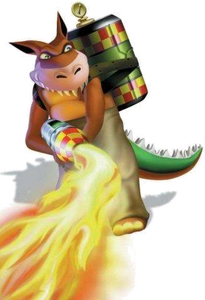 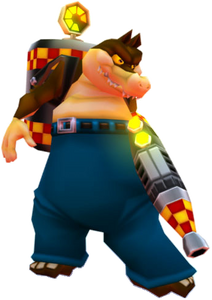 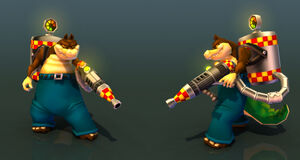 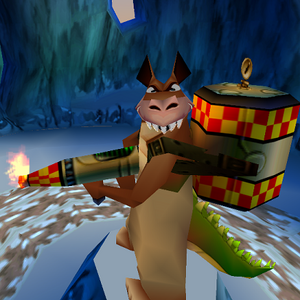 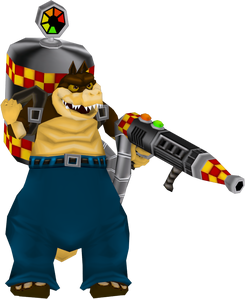 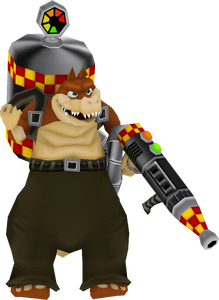 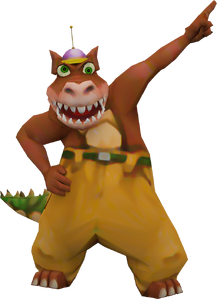 Model of a brainwashed Dingodile for Crash Nitro Kart. 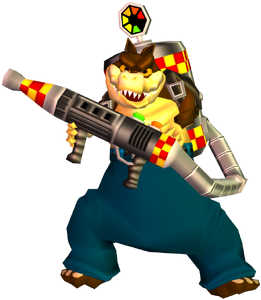 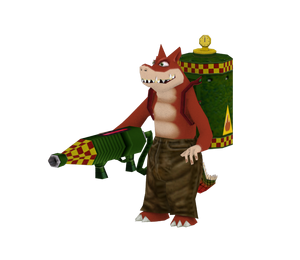 Dingodile in Crash Bandicoot: The Wrath of Cortex. 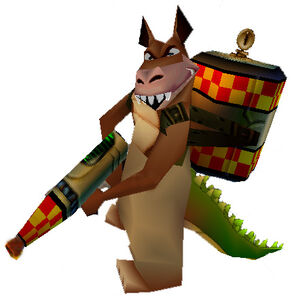 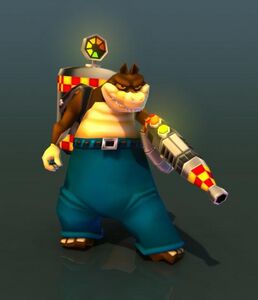 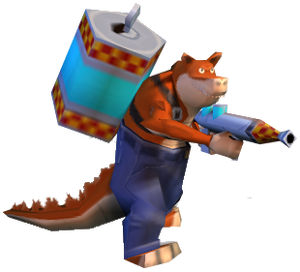 Dingodile in Crash of the Titans. 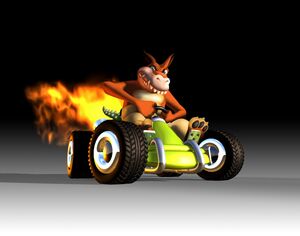 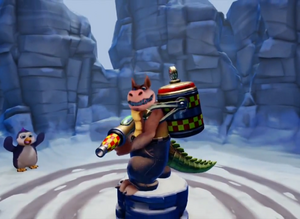 Dingodile and a penguin believed to be Penta. 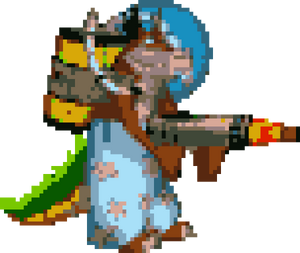 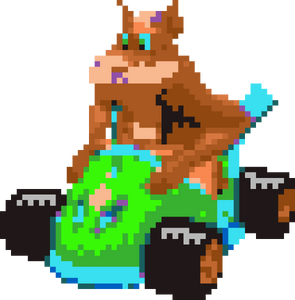 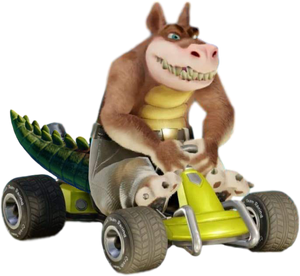 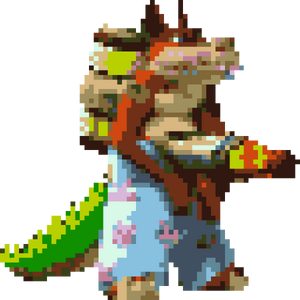 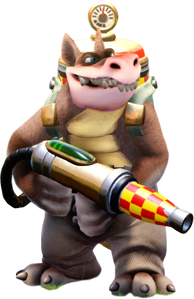 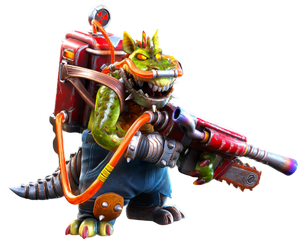 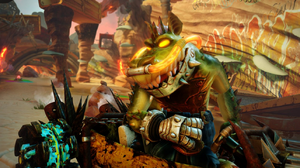 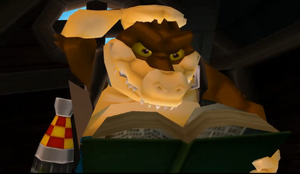 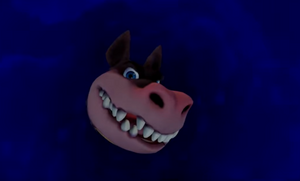 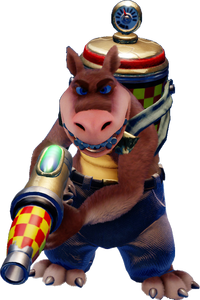 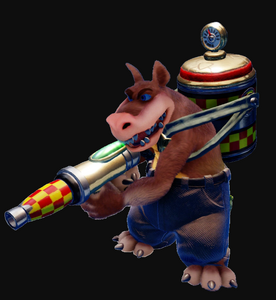 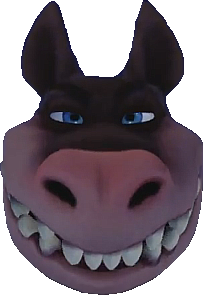 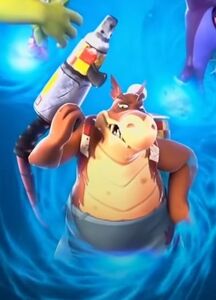 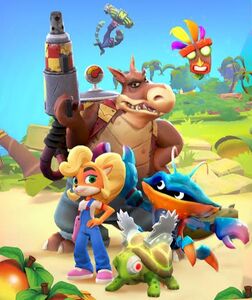 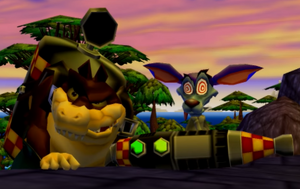 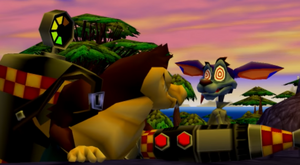 Retrieved from "https://villains.fandom.com/wiki/Dingodile?oldid=3827633"
Community content is available under CC-BY-SA unless otherwise noted.