Member of the Cootie Kids

Attacking and infecting those around him.

Infect any child in his vicinity and wipe out anyone immune to the virus (succeeded in infecting children, but later failed in killing the staff).

Dink is a major antagonist of the 2014 live action film Cooties. He is a school boy in fourth-grade at Ft. Chicken Elementary School. He is the beginning of many children on the playground to be infected with the food-borne virus that transforms children into zombie-like monsters.

He was portrayed by Miles Elliot.

Dink is first shown with his friend Patriot bullying one of their classmates, Shelley, about the blisters covering her face, with Dink comparing them to a butt.

Unknown to the duo, Shelly had eaten a contaminated chicken nugget, which had began to take affect on her. The bullying ceases when the substitute teacher, Clint Hadson, walks into the room. Along with Patriot, Dink torments Clint, calling him a cunt. However, when Clint doesn't do anything back, Dink urges Patriot to tug on Shelly's pigtails, resulting in the latter biting into Patriot's cheek, infecting him with the virus. When the bell rings for recess, Dink makes a bee-line for Shelly, who digging a hole in an attempt to escape. Dink manages to interrupt her long enough for her scratch his cheek, infecting him with the virus. He then dashes around the playground, scratching and biting unsuspecting children and infecting them. He and his newly infected classmates then maul Mr. Pederson, Ms. Nash, and Vice Principal Simms to death.

When the PE Coach, Wade, notices them and makes a run for it, Dink, along with other kids, chase after him, but are locked outside. He then ganged up on a police officer and played with the remains of his victims. As parents come to pick up their kids, he notices the teachers on the roof, who are busy saving an uninfected pupil named Tamra, and leads a group of children through the trees to get to them. He chases the staff and uninfected children through the corridor and is able to latch on to the sex-ed teacher, Doug's leg. He dragged inside, where he also is able to grab ahold of Clint's ankle.

Just as he is about to bite Clint on the ankle, Wade bludgeons Dink to death with a fire extinguisher, spraying his surroundings with black blood. Doug decides to run tests on the Dink's body and drags it into the boy's restroom along with two other teachers, Tracy and Rebekkah. Doug extracts the boy's brain, which has a dead frontal lobe and nerves. It is also reveals that infection is virus. Dink's body was most-likely left rotting in the bathroom.

Before the infection, Dink was a bully and not very studious, as shown when Calvin mentions he would cheat off of his tests. He seems to be a follower of Patriot and very uncreative, as when he was bullying Shelly, he would always end his insults with "... my a**!" With what friends he had, he seemed to care about them as he confronted Shelly when she bit Patriot. After his infection, he became a savage follower of Shelly, doing her dirty work as she tried to find a way to escape the school.

Dink has pale skin, brown eyes, and bright blond hair. After being infected by Shelly, who left a scratch on his left cheek, blisters grew over his face and he developed heavy eye bags.Throughout the course of the film, blood from his victims stain his skin and his clothes. He is seen wearing a neon yellow sleeveless shirt and blue jeans. 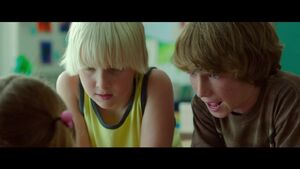 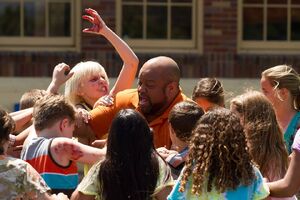 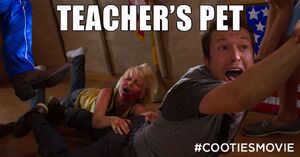 Dink just before his demise. 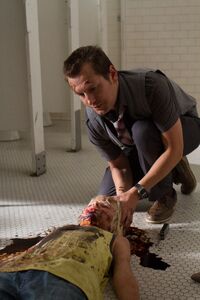 Doug extracting Dink's brain.
Add a photo to this gallery

Retrieved from "https://villains.fandom.com/wiki/Dink_(Cooties)?oldid=3762321"
Community content is available under CC-BY-SA unless otherwise noted.