Win the DeLeon, defeat Tobey Marshall, and inculpate him for the death of Pete. (failed)

Arrogant Archenemy
Dino Brewster is a wealthy and arrogant ex-NASCAR driver and the main antagonist in the 2014 film, Need for Speed and serving as Tobey Marshall's rival after he killed Pete.

He was portrayed by Dominic Cooper.

The film centers around Tobey Marshall (Aaron Paul), a blue-collar mechanic who races muscle cars on the side in an unsanctioned street-racing circuit. Struggling to keep his family-owned garage afloat, he reluctantly partners with the wealthy and arrogant ex-NASCAR driver Dino Brewster (Dominic Cooper). After a race, Brewster conscripts Tobey into completing the build of a rare Ford Mustang Shelby in exchange for 25% of the car's estimated selling price of $3 million. The completed Mustang is put up for auction at a party in New York City. British car broker Julia Maddon (Imogen Poots) arrives at the auction and tells Tobey and Dino that her client Bill Ingram, wants to purchase the car if they prove that it could be driven over 230 mph. Despite objections from Dino, Tobey takes the Mustang to a local racetrack and successfully drives it at 234 mph. The car is then sold to Julia for $2.7 million. Dino, outraged that Tobey violated his orders, challenges Tobey and his friend Pete to a race. Dino offers Tobey a deal: if Tobey wins, Dino will relinquish his entire share of the Mustang sale, otherwise, Tobey will have to forfeit his share to Dino. The group races on an Interstate in three illegally imported sports cars (Koenigsegg Agera). Dino, realizing that he may lose the race, intentionally bumps Pete's car, sending it down a ravine, and Pete dies when the car bursts into flames. This allows Dino to frame Tobey for a crime he didn’t commit, sending him to prison for manslaughter while Dino disappears from the scene and expands his business out West.

Two years later, Tobey is released and set on revenge — but he knows his only chance to take down his rival Dino is to defeat him in the high-stakes race known as De Leon — the Super Bowl of underground racing. However, to get there in time, Tobey will have to run a high-octane, action-packed gauntlet that includes dodging pursuing cops coast-to-coast as well as contending with a dangerous bounty Dino has put out on his car. With the help of his loyal crew and the surprisingly resourceful Julia, Tobey defies odds at every turn and proves that even in the flashy world of exotic supercars, the underdog can still finish first. Dino attempts to ram Tobey off the road along the Pacific Coast Highway, but Tobey slams on his brakes, causing Dino to crash. Tobey reaches the finish line, but turns around and pulls Dino out of the burning wreckage. Both men are then arrested by California Highway Patrol immediately thereafter, and the police prove that the Koenigsegg belonged to Dino, and use that evidence to have Dino incarcerated for killing Pete. 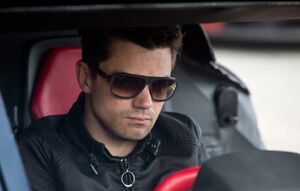