Stealing and selling Earth-based treasures at a high cost

Dino Geist is the main antagonist of the first Yuusha anime series, Yuusha Exkaiser. He is the leader of the Geisters, space pirates who travel to Earth to steal anything considered to be treasure and sell it to a trader for high cost. He changes into either a T-Rex or, for transportation, a jet. He has his bat-like minion Komori give out his messages to the other Geisters.

He is portrayed by Shōzō Iizuka, who is best known for voicing Dr. Neo Cortex in the Japanese dub of Crash Bandicoot and numerous villains in the Metal Hero franchise, such as Don Horror, Demon King Psycho, Great Emperor Kubilai, and Satan Goss.

When the Geisters arrive on Earth, Dino Geist stays in their hideout and lets his minions steal all the treasures for him via his bat-like minion Komori bringing his orders to the Geisters. However, the Space Police Kaisers have followed to arrest them. After several failed attempts to capture some treasure, he has had enough and decides to join his minions to get the next treasure, upon stealing which (a cruise ship with the Kaisers' hunam friend Kouta and his friend and family on-board), Dino Geist has a customer named Trader come down to purchase it. However, Exkaiser arrives and fights Dino Geist. Exkaiser uses his finishing move, but Dino Geist survives it and escapes. After this, Dino Geist has occasionally joined his minions to capture other kinds of treasure, but always ends up fighting against Exkaiser. Near the end of the show, the Geisters have found a shield with a mirror that can imprison living things inside. Dino Geist decides to use this on the Kaisers. So during their plan to sell an oil rig to Trader, one of the Kaiser, God Max, arrives to stop them. But the Geisters use the shield to imprison him inside. When Exkaiser and Ultra Raker arrive, they manage to stop Dino Geist’s plan but fail to rescue God Max. Later, Dino Geist has his minions lure out the Raker Brothers. When they face Dino Geist as Ultra Raker, they end up getting imprisoned in the shield with God Max. Exkaiser tries to save them, but the Geisters escape. In the final confrontation, Exkaiser fights off against the Geisters again. During their battle, Kouta manages to free God Max and Ultra Raker from the shield. After being freed, they help Exkaiser fight off against the Geisters. Having enough of Kouta, Dino Geist has Komori capture him. Dino Geist takes Kouta into space with Exkaiser following him up to the moon. After Exkaiser rescues Kouta, the two fight each other. The battle ends with Exkaiser overpowering Dino Geist. Dino Geist tells him to go ahead and kill him, but Exkaiser tells him that he’s going to arrest him instead. Not wanting to be arrested by Exkaiser, Dino Geist flies straight to the sun to commit suicide, where he melts and eventually explodes. The Geisters back on Earth end up getting imprisoned in the shield along with Komori and Trader. 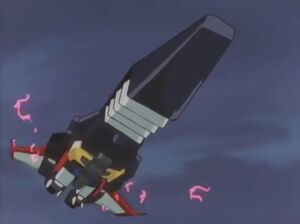 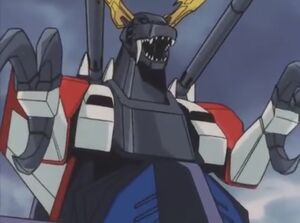 T-Rex Form
Add a photo to this gallery
Retrieved from "https://villains.fandom.com/wiki/Dino_Geist?oldid=3846404"
Community content is available under CC-BY-SA unless otherwise noted.