Eat everything in his path.

The Dinocroc is the titular main antagonist of the 2004 natural horror film of the same name. It is a powerful reptile that is half-dinosaur and half-crocodilian.

Its vocal sound effects were provided by Ken Skoglund.

The Dinocroc is a hybrid of Suchomimus and Sarchosuchus Imperator, and resembles a spinosaurid theropod. It is much smaller than the famous Spinosaurus, its size being closer to that of either Baryonyx or maybe a real Suchomumus. The other one from Dinocroc vs Supergator looked like a hybrid of Stratiosuchus from Brazil and the South American Spinosaur Irritator.

The Dinocroc is just like many other antagonistic predators are portrayed in fiction: always hungry and having a specific taste for humans. But what made it dangerous is its tenacity and persistence to after protagonists and other humans who stood on its path, which equal to its insane endurance.

As the Dinocroc is said to be a gene-spliced mixture of crocodile and a dinosaur ancestor of the modern crocodile, it is highly dangerous, aggressive, carnivorous, and bloodthirsty, creating a sort of squared version of its own instinctual ferocity.

While the Dinocroc appears primarily driven by hunger it also show a clear aggression for all living creatures no-matter how much it eats. The methodical picking off of all humans no matter how far they run indicates some sort of blind hatred for all things regardless of its innate instincts.

As revealed in the last part of the film, the Dinocroc had eggs, indicating part of its extreme defensive nature may be in response to protecting its young. Dinocroc is also revealed to be extremely territorial and protective, as witnessed in the crossover film between it and Supergator.

This film features the Dinocroc, who serves as one of the two main antagonists in the film, the other being its arch-rival Supergator.

In the 2010 film Dinocroc vs Supergator, another Dinocroc is seen. It looks fairly different here and has different origins.

It spends most of the movie terrorizing a local town until it comes to blows with another super-crocodillian called the supergator. Being that this creature was smaller, and built more like a real alligator than a dinosaur, it was dispatched fairly easily. The Dinocroc was then unceremoniously killed by a saw dust explosion.

Dinocroc has the classic ability set of a Jurassic Park-styled dinosaur as well as other predatory monsters in other film: very strong for its size, fast, agile, and extremely hard to kill. The Dinocroc has the capacity to travel at high speeds as shown in Dinocroc vs Supergator, where it can easily keep up with a jeep.

Its skin is highly resistant to harm as bullets and fire-bombs appear to be less than lethal to it. The Dinocroc has a demonstrative talent in stealth and prefers to use guerrilla tactics for basic hunting purposes. Despite its seeming preference for stealth, the Dinocroc is no stranger to open combat as shown when it fights the Supergator. 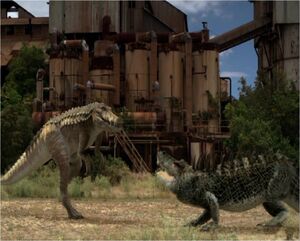 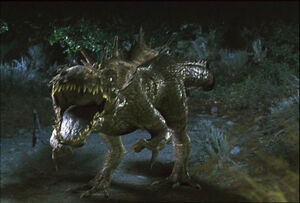 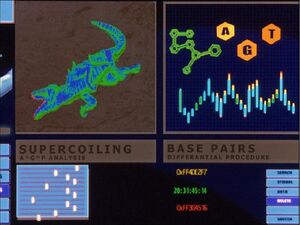 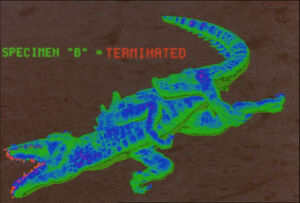 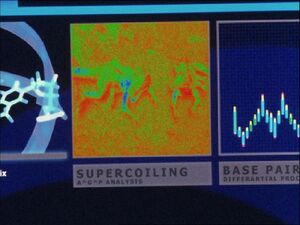 Specimen A and Specimen B 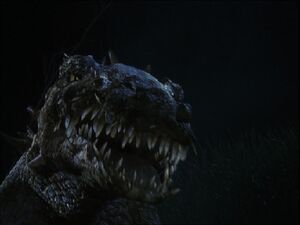 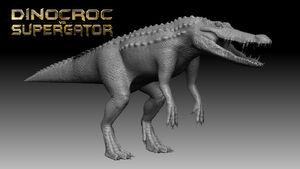 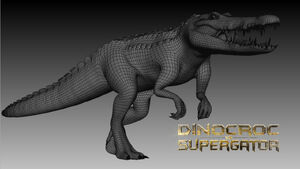 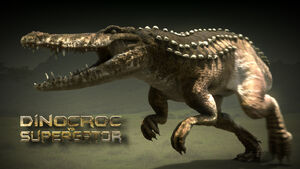