Regain his standing as a credible duelist.

Defeat Joey Wheeler for humiliating him and take back his Red Eyes Black Dragon (failed).

Dinosaur Ryuzaki (Rex Raptor in the 4Kids dub) is a minor recurring antagonist in the Yu-Gi-Oh! anime series.

Rex Raptor plays a deck focusing on dinosaur type monsters, though his mightiest monsters are dragon type. He is the runner-up in the regional championship, losing the final round to Insector Haga. He is not a cheater like Weevil but is a jerk all the same.

However, the last seasons of the anime adaptation portray him as a joke easily dispatched by the villains and willing to sell his soul to get revenge on Joey Wheeler. They also portray him as Weevil's best friend and partner in crime, something much less apparent in the manga.

After being eliminated in the first round in Dueling Kingdom, He and Weevil became unpopular and people are making fun of them. They were beaten up by three bullies who helped a kid of getting his card back.

In Season 4, Waking the Dragons, Rex and Weevil attempted to steal Yugi and Joey's rare cards, but were challenged to a duel by Gurimo, who beat them and took their souls. They were released after Yugi defeated Gurimo. Rex and Weevil snuck aboard during Yugi's trip over to Pregasus' castle in the hopes of finding rare cards and tried to get an Orichalcos card from Rafael, becoming two of Dartz's henchmen after hitchhiking aboard Rafael's helicopter. Rex dueled Joey in a train station as revenge for taking his Red-Eyes and was defeated. His soul was taken by the Orichalcos and was released when Dartz and the Orichalcos God were defeated.

In the first half of Season 5, Grand Championship, Rex and Weevil entered Kaiba's tournament as one duelist and dueled Zigfried von Schroeder, who easily defeated them with his Valkyries.

In the second half of Season 5, Dawn of the Duel, Rex and Weevil stole Yugi's Millennium Items and Egyptian God Cards (only going after the latter) but ran into Dark Bakura, who knocked them out (temporarily trapped their souls in the Shadow Realm in the 4Kids dub) and returned the cards and items to Yugi. They suffered a lot of the consequences of Zorc ravaging the past but survived it all. 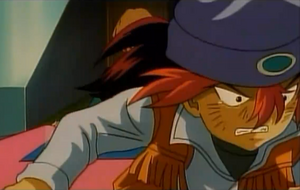 Rex in Yu-Gi-Oh! The Movie 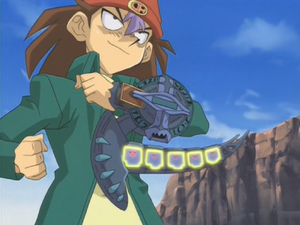 Rex with a Chaos Duel Disk