Diosanto is a one-time villain from the FOX animated sitcom The Cleveland Show, only appearing in the episode "Back to Cool". He is a crime boss whom Cleveland attempted to, but failed to assassinate.

In the cold opening, Cleveland went through a series of attempts to shoot something, which failed on account of Junior startling him. The first two things were shooting a can and going to a shooting gallery. The final time was, when Cleveland was trying to snipe a crime lord named Diosanto.

Diosanto was in a dark alley way, making a cartel trade off with some other mobsters. He shook hands with another guy and that gay handed him a briefcase full of strange white packets, possibly either drugs or money. Whatever it was, Diosanto was on the verge of obtaining power over an corrupt cartel with political power. Unbeknownst to Diosanto and the other mobsters, Cleveland was watching them from the top of a building and aiming a sniper rifle at Diosanto. He planned on shooting Diosanto in the head, to stop the transaction, and prevent Diosanto from reaching any power.

Just then, Junior showed up and started Cleveland, just as he took the shot. The bullet just missed Diaosanto and shot a goat instead, letting for Diosanto and the other members of the gang to flee, getting them off scott-free with the crime, and allowing for Diosanto to get the keys to the cartel. Angered, Cleveland lashes out at Junior for what he did. He explains how, with Diosanto being in charge of whatever he's in charge of, villages are going to be burned to the ground and women are going to be forced to wear sombreros.

After the theme song, Cleveland is seen, reading the newspaper at the beginning of the episode. The newspaper reads "Viva Diosanto!", along with a picture of his face, implying that he has succeeded in his rise to power. In anger, Cleveland mumbles "No es bueno", before Rallo grabbed the paper from him and threw it at Roberta. 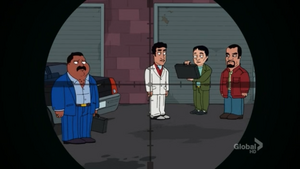 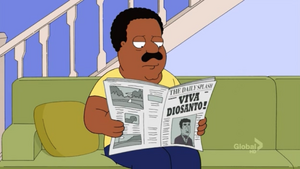