The Tenth Colossus, nicknamed Dirge, is a major antagonist from the video game Shadow of the Colossus. It is the tenth boss encountered in the game and a vessel for the essence of Dormin.

Dirge and the other fifteen Colossi were created by Lord Emon to contain the fragmented essence of the defeated evil Dormin. He set them all to wander the Forbidden Lands, destroying anyone who comes their way, so that Dormin could never be resurrected.

Dirge is the tenth colossus to be encountered, residing in a secluded sandy cave to the west. Once Wander enters the cave where Dirge is hiding, it emerges from the sand and attacks Wander, chasing him down by swimming through the deep sand, delivering a powerful bite if it catches up. Dirge is incredibly fast, the only way Wander can outrun Dirge is by riding on his horse Agro. When Dirge surfaces to ram Wander and Agro, Wander must use his bow and arrow to shoot an arrow at Dirge's eye. If Wander is successful, Dirge will go out of control, roll on his back, and slam into a wall. Wander must then climb onto Dirge and stab the monster's two vitals. After getting stabbed enough, Dirge will regain consciousness and dig back under the sand, enraged. Wander just repeat this process several more times until Dirge dies, collapsing to the ground and releasing the fragmented essence of Dormin contained within its body.

Dirge's corpse can be seen as the credits roll. 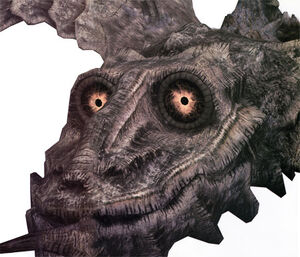 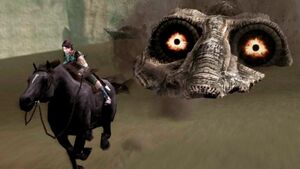 Dirge vs. Wander and Agro. 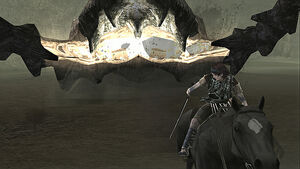 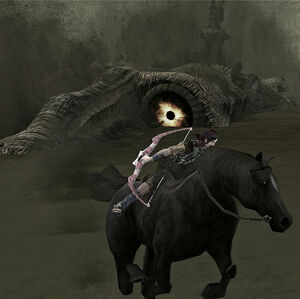 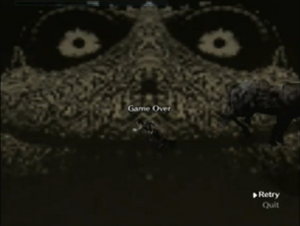 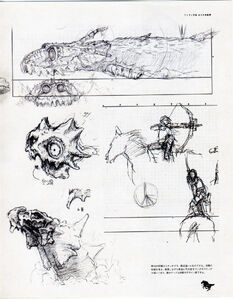 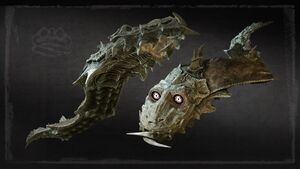 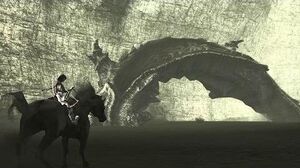 Retrieved from "https://villains.fandom.com/wiki/Dirge_(Shadow_of_the_Colossus)?oldid=3768916"
Community content is available under CC-BY-SA unless otherwise noted.