The Dirty Bubble is a recurring antagonist from SpongeBob SquarePants and the second arch-nemesis of Mermaid Man and Barnacle Boy behind Man Ray.

He was voiced by the late Charles Nelson Reilly in his first appearance and in "Lights, Camera, PANTS!", and then he was replaced by Tom Kenny, making him the current voice of this fiend since "Mermaid Man and Barnacle Boy II". Tom Kenny also voiced Uncle Howee from The Haunting Hour, Dr. Fen from Kim Possible, Binky the Clown from Shakes the Clown, the Abrasive Side from Spongebob Squarepants, the Chritchellites from Samurai Jack, and Stuck Chuck from Kid Cosmic.

During the episode "Mermaid Man and Barnacle Boy V", Dirty Bubble was part of a villainous alliance named E.V.I.L., along with Man Ray and Barnacle Man, an evil alter-ego of Barnacle Boy. He, Man Ray, and Barnacle Man had been repeatedly committing crimes together around Bikini Bottom. Later, they confronted Mermaid Man while they were teasing fish who were in Make-Out Reef. After Mermaid Man's acquaintances ended up defeating themselves, Mermaid Man had nothing left and fell on his back.

Knowing that Mermaid Man essentially surrendered, Barnacle Man boasted at him that he would have to give in to his demands. When Mermaid Man requested suggestions of what he needed to give in to, the Dirty Bubble suggested that he should eat dirt. After Barnacle Boy returned to the light side with Mermaid Man under his three special conditions, E.V.I.L. fell apart, leading to the eventual arrests of Man Ray and the Dirty Bubble.

The Dirty Bubble is a sentient (possibly mutated), translucent, brown, dirt-covered bubble, hence his name. He has a pair of beige-colored eyes surrounded by black rings and a large mouth with jagged lips. He can float and fly in the air. He also has the ability to trap his enemies inside of his body & his weakness is that his enemy can pop him.

The Dirty Bubble is a wicked villain who gets a thrill from tormenting others, mostly by covering them in his dirt and grime, polluting the ocean, and trapping them inside of himself. He has an unusual obsession for making people eat dirt and he can be rather irritating to his allies when detailing long and boring stories about good times he's had in the past. The Dirty Bubble is easily one of Mermaid Man and Barnacle Boy's most powerful and threatening villains, comparative only to Man Ray and Atomic Flounder. As one of the villains of the unholy trinity of supervillains, Dirty Bubble will often work in cahoots with the other two, as a team of allied forces. When he does, he is more powerful, working with them as a group, as opposed to working alone. 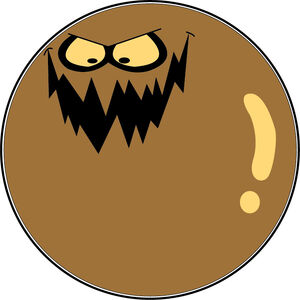 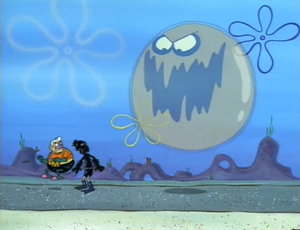 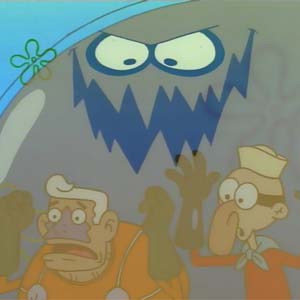 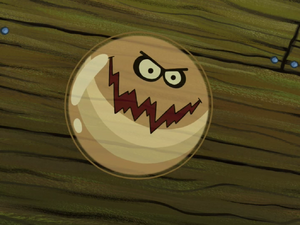 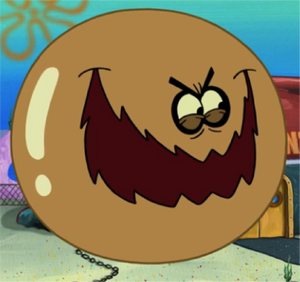 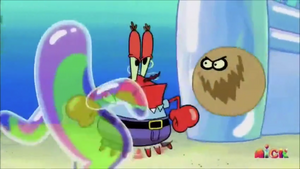