Bring demons into the world.
Give demons power.

The Disciples of the Ram are the main antagonists of the horror films Annabelle and Annabelle: Creation, part of The Conjuring franchise. They are a satanic cult that worships demons and the devil and seek to bring them into the world and bring them more power.

It is unknown at what time the cult was founded, and it is unknown who runs it. What is known is that it was joined by Janice/Annabelle Higgins during her teenage years, under the possession of the demon from the Annabelle doll. She ran away from home and joined the cult, though her parents assumed she joined the hippie crowd.

During her two years in the cult, the demon replenished its power through their cult rituals and sacrifices. Using Janice/Annabelle, she managed to attract another cultist and begin a faux romantic relationship with him.

Not long after, Janice/Annabelle and the man traveled back to Annabelle's hometown, hoping to perform a sacrificial ritual to summon demons into a conduit. The two broke into Annabelle's adoptive parents' house and violently murdered them both. The neighbors, Mia and John Form, heard the commotion and called the police, but the two killers crept into their home. Annabelle got ahold of one of Mia's dolls and locked herself in the nursery. The Thin Man stabbed a pregnant Mia, coming dangerously close to killing the baby. John rushed in and fought the Thin Man, but was overpowered and knocked unconscious. As the Thin Man prepared for a killing blow to Mia, the police arrived and shot him dead. The police then broke down the nursery door to find that Annabelle had taken her own life, and she has painted a symbol in blood next to her. Her corpse still held the doll.

The news reported on the incident, explaining that the two cultists were members of the Disciples of the Ram. The doll was indeed possessed by the demon that was in Annabelle, who began terrifying the Forms, posing as Annabelle's ghost, which considering the amount of time it had possessed her it might as well have been. Mia seeks the help of Detective Clarkin, who tells her about the cult and their practices. Later, Mia seeks help from her friend Evelyn, who helps her research the cult and discover what is haunting the family is not a ghost, but a demon. 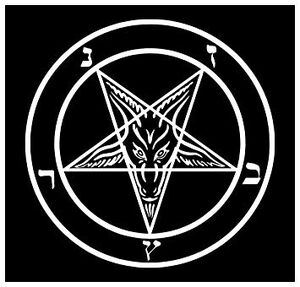 Annabelle's violent ritual death, with the symbol of the demon and the cult on the wall.

A ram belt buckle that the Thin Man wore. 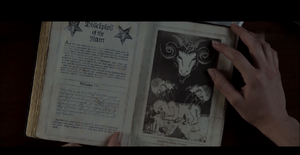 Mia reading about the Disciples of the Ram.