Spirit of Disharmony and Chaos

To bring chaos and disharmony to all of Equestria (formerly).

Discord, also known as the Spirit of Disharmony, is a former antagonist turned supporting protagonist in My Little Pony: Friendship is Magic. He is an omnipotent being of chaos and disorder who desired to turn all of Equestria into a chaotic wasteland before realizing the value of friendship and redeeming himself. He appears as the main antagonist in the two-part Season 2 premiere "Return Of Harmony", the Season 3 episode "Keep Calm and Flutter On", and the secondary antagonist of the Season 4 finale "Twilight's Kingdom" before his true redemption.

He was voiced by John de Lancie, who also played Q in Star Trek: The Next Generation, who was Discord's main inspiration, as well as Sinestro in Duck Dodgers, and Brainiac in Justice League Action.

As the incarnation of chaos and disharmony, Discord professes great inclination to these two subjects. Every movement he performs is related someway with this. Discord possesses a very questionnaire sense of humor, many times grazing the madness, which is strengthened by his powers of reality bending.

He specifically enjoys dressing up with different outfits, (some of them referencing to human topics, what raises the opportunity of him traveling to other worlds, such as our very world). As a semi-omnipotent deity, Discord considers himself above all the rest, diminish magnitude to every setback presented before him, including those which suppose a threat to him. It could be said that Discord suffers of an superiority complex, something that has lead him to find himself trapped in a rocky prison twice.

However, after every defeat he learned from his mistakes. After his first escape he did exaggerate the Elements' power and tried to get rid of them, however, his overconfidence implied his failure once more when after corrupting the mane six he thought they were not a menace anymore.

He has no sense of vengeance, as he is shown to no desire in seeking revenge on Princess Celestia for imprisoning him thousand years ago, After the Mace Six imprison and later released Discord from his stone prison, He also no interest in taking revenge on them for defeating once again.

After he was released under Princess Celestia's supervision, he tried to find a supernumerary way to counter the Elements power by manipulating Fluttershy for his own desires behind the trick of a false friendship, which eventually resulted counterproductive since he especially developed strong feelings for her. This leads to two prominent attributes in Discord's character. He is highly duplicitous, manipulative, uncompromising, and unscrupulous, showing no hesitation in lying, tricking, playing filthy and diverse mendacious methods in order to achieve his goals. He also seems to have a rather sadistic and cold-blooded side to him, such as when he was gleefully lying back and watching Cherry Berry and Comet Tail struggling to get untangled from the Plunderseeds, and due to the fact that he constantly laughs at other's dismays.

In Keep Calm and Flutter On, he is seen wearing dead bunny slippers and chuckling at the ponies misfortunes at the dinner party. In fact, he is a supporter of physiological torture, as he enjoyed Twilight's despair once she found herself abandoned by her friends. However, if he can't obtain the expected results with his charming skills, he doesn't doubt in using the force to brainwash his victims. However, there is still some good inside him.

In the moment, Fluttershy declared to consider him a friend Discord showed to be really affected by this statement, as he mentioned that he had never had friends before. Many fans consider this fact as the motivation that drove Discord the way he is. Until the moment, Fluttershy had shown to see Discord as more than a monster but as a true "sweetheart" he hadn't realized of how alone he was. If fact, he hated his loneliness that much that just for not being on his own again he renounced to domain the world as he had ever desired. However, since then, it seems that he still remains his mostly naughty and disobedient self.

In "Twilight's Kingdom", it shows that Discord has begun to truly understand friendship with all of the ponies and fell guilty when he has allowed Tirek to drain their magical powers. He then asked Twilight for merciful forgiveness and thanks her for saving him. At the end of the second episode, it shows that Discord made friends even from Celestia and Luna - his formal nemeses. Twilight even included him into her kingdom "court" as one of her closest, dearest, and most loyal friends.

However, despite this, come "Make New Friends but Keep Discord", Discord still apparently struggles with understanding the concept of friendship, and still shows his mischievous, problematic, and self-centered traits, feeling that he was replaced by Fluttershy's new friend Tree Hugger and that Fluttershy no longer cared for him just because she had chosen to bring Tree Hugger over him. As well, he brings the Smooze as his friend to the Gala, knowing about the Smooze's benevolent, but rather obstreperous, troublesome, disruptive, truculent, uncaring, and dangerous nature, intentionally trying to cause mischief just to make his point to Fluttershy.

Discord is one of the species called a draconequus, as explained by Cheerilee from the beginning of the episode. Discord is a combination of many body parts from different creatures which also makes him a chimera. He has the body of a brown horse, the head of a gray pony, with an ivory deer antler on the right, a turquoise goat horn of the left, one long fang, yellow eyes with red pupils, an orange snake tongue, a black donkey mane, and a white goat beard. The rest of his body consists of the right paw of a pale yellow lion, the left yellow talon of a brown eagle, the right leg of a green lizard, the left leg with a sepia hoof of a chestnut deer, the right wing of a purple bat, the left wing of a blue bird, and a red dragon tail with a white tuft at the end.

A heavily modified version of Discord is also the main antagonist of Hotdiggedydemon's .MOV series. For more details on that incarnation.

Fans have picked up on the Satanic elements present in Discord's character, notably him being a semi-omnipotent, malevolent trickster and tempter who stands opposed to Order and Harmony itself. Many depictions of Discord thus cast him as the Ultimate Evil present in Equestria. In many fanworks, he has been portrayed as Pure Evil in stark contrast to his portrayal on the show.

Some other depictions cast him and Chaos as a necessary force that balances Order. Occasionally, fans may straight-up portray him as a good-natured and fun-loving guy (this is often accompanied by depicting Princess Celestia as an oppressive tyrant).

As an embodiment of Chaos, Discord appears to be borderline omnipotent. He has manifested a great number of abilities and skills over the course of G4 MLP - abilities that he has shown so far include:

Discord's strengths are many, while his weaknesses are extremely few. Attacking him head-on is usually doomed to fail, as he can easily thwart any assault through his reality-warping power. However, he is vulnerable to the Elements of Harmony, which have successfully turned him to stone twice. Using the Elements also dispels all of his chaotic magic, returning things to their rightful shapes and places.

He has also been shown to be vulnerable to other entities of immense power, such as a sufficiently empowered Lord Tirek. Discord was not able to escape Tirek's telekinetic grasp, nor stop the villain from draining all of his chaotic magic. This may be due to Tirek's anti-magic properties shutting down Discord's magic when sufficiently empowered. Similarly, a sneeze from the Tatzlwurm was able to infect him with a severe illness he was not able to cure himself of.

One important weakness of Discord is himself. He tends to be very overconfident and so assured of his own invincibility that he will not go all-out against enemies. In addition, his tendency to underestimate opponents means that he can be taken by surprise and defeated before having the chance to react. While intelligent, he is also not immune to being manipulated and fell for Tirek's proposition to become allies, not suspecting that Tirek would betray him in the end. Also, prior to his redemption, he secretly wanted a friend, which allowed Fluttershy to sway him towards the side of good.

As shown in Discordant Harmony, If Discord exhibits as normal behavior more than his chaotic persona, He will slowly fade from existence showing not being chaotic in nature will up destroyed. But luckily, Fluttershy manage to make Discord to snap out of it and was returned to his natural chaotic behavior, thus saving his life. This is why he shouldn't avoid his position of what he represents. 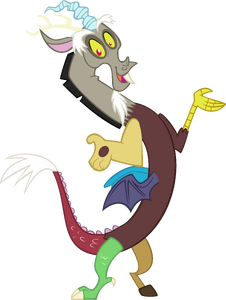 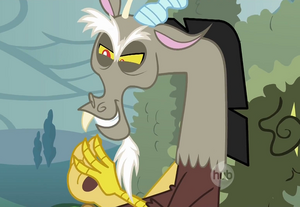 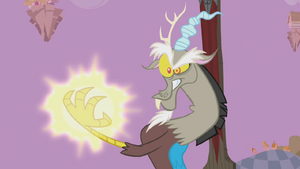 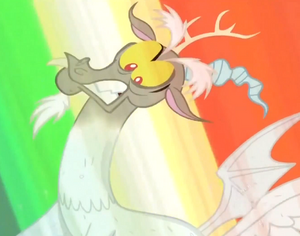 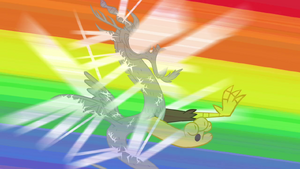 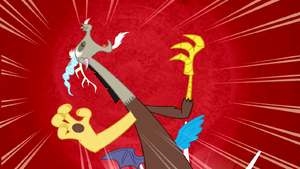 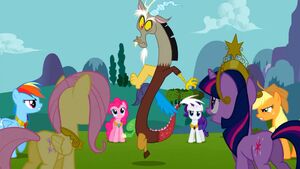 Discord encircled by the Mane 6 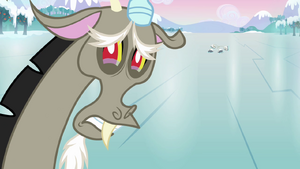 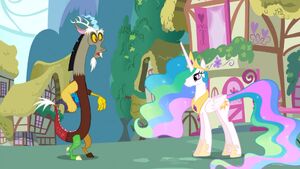 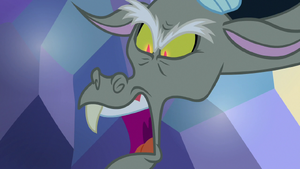 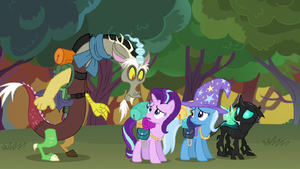 Retrieved from "https://villains.fandom.com/wiki/Discord_(My_Little_Pony)?oldid=2474077"
Community content is available under CC-BY-SA unless otherwise noted.