Dishonest John (or "D.J.") is the villain of Beany and Cecil. He is dressed like a Simon Legree character, and he is constantly scheming to foil Beany and Cecil's adventures.

He was originally voiced by the late Irv Shoemaker in the 1960s series, and by Maurice LaMarche in the 1980s series.

His catchphrase is a sinister "Nya-ah-ãhh!", and he occasionally refers to Cecil as a "tall toad" or "big salami" (referring to his big, limbless body). Whenever Dishonest John's schemes are revealed to the heroes, Cecil tends to respond with an aghast "What the heck! D.J., you dirty guy!".

When Dishonest John receives his inevitable come-uppance, it is usually just as painful as the abuse Cecil has endured in the rest of the episode. Dishonest John also has a supervillain alter-ego known as The Bilious Beetle. In this guise, he can fly under his own power and sports a painful stinger. "D.J." also appeared disguised on occasion as the mechanical robotic octopus "Billy The Squid" usually in haphazard attempts to simulate seastorms to scare away the crew of the Leakin' Lena when on a treasure hunt. 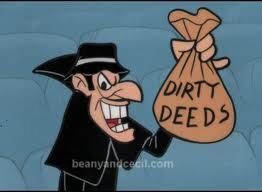 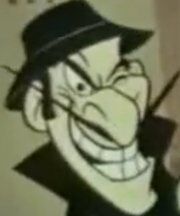