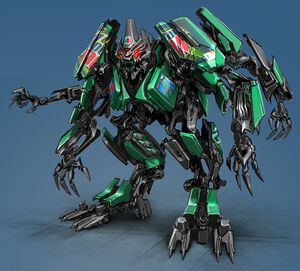 Dispensor is a minor antagonist in the 2007 film Transformers. He is a Decepticon who transforms into a Mountain Dew Vending Machine, has an arm-mounted can-cannon.

When Sam Witwicky accidentally activated the AllSpark during the battle of Mission City, the artifact's radiation effected several electronic devices, including a Mountain Dew soda machine that would eventually become Dispensor. As soon as he came to life, Dispensor began shooting soda cans at people passing by from his arm-cannon.

While he is not heard from at the end of the film, the Revenge of the Fallen comic prequel Transformers: Alliance shows Dispensor ambushing Sam shortly after the death of Megatron while Ratchet is repairing Bumblebee's legs. Fortunately, the Autobot medical officer crushed Dispensor to death by stomping on it. While examining Dispensor's remains, Ratchet disapproved of his soft drink of choice. 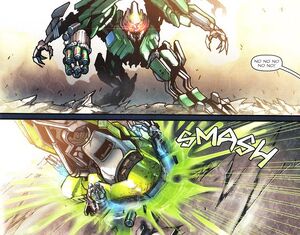