The Distant Villagers are minor antagonists in Hollow Knight. Residing in the Distant Village located at the end of Deepnest, this mysterious group of bugs have isolated themselves from the rest of Hallownest for rejecting the Pale King as the ruler of the kingdom. Those who wander in are promptly disposed of, the Knight being no exception.

On their way to find Herrah the Beast, one of the three Dreamers that sealed the entrance to the Temple of the Black Egg and the Hollow Knight, within the mentioned Beast's Den of Deepnest, the Knight comes across a ruined pile of webbed cocoons called the Distant Village. Within one of the only two revealed entrances is a group of residents standing around a bench in the middle of the room. When talked to, they calmly tell the Knight they are friends and request the Knight to sit on the bench and rest. Because there is no revealed entrance to the Beast's Den from the Distant Village, the Knight is given no other option but to sit on the bench, which is coated in webbing once they sit down. The music becomes distorted as the villagers slowly approach the Knight as they struggle to free themself from the villagers' trap. The screen cuts to black, and violent noises similar to the Knight taking damage play out before a loud roar is heard.

The Knight wakes up in the Beast's Den tangled in a web, though they are able to cut through using their Nail. From here the Knight is given access to explore the Beast's Den and come across Herrah's resting body at the end, allowing them to absorb her and remove her seal on the Black Egg. Upon opening the entrance of the Beast's Den to the Distant Village, the Knight discovers that all of the villagers have ran off leaving behind their masks and cloaks. Whatever the villagers' true forms were is unclear as they are never seen again.

Two actions before sitting on the bench foreshadow the villagers' true motive. The first action is if the Knight uses the Dream Nail on the villagers, nothing will be read. The second action is the other entrance to the Distant Village, located in a web cocoon just below the entrance with the villagers. Within it is a collection of dead bugs coated in webbing mound atop one another, presumably killed by the villagers. When Dream Nailed, the bugs reveal their last thoughts were “They lied," and "Not friends." 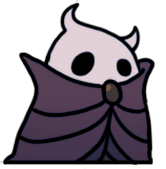 Flat Distant Villager.
Add a photo to this gallery

Retrieved from "https://villains.fandom.com/wiki/Distant_Villagers?oldid=3984602"
Community content is available under CC-BY-SA unless otherwise noted.