Member of the Lillim Witch Coven

Keep the Princess Una as a prisoner. (failed).

Ditchwater Sal is a minor antagonist in the 2007 film Stardust. She is a witch and a member of the coven of the Lillim witches. She is the captor of Princess Una for many decades.

She was portrayed by Melanie Hill.

At some time Sal took the Princess Una captive and used her as a slave to do her every bidding through an enchanted chain that could only be irrevocably broken when she, Sal, was well and truly dead. If not, the chain would automatically repair itself when broken. Sal normally traded at the market just outside of the village of Wall. Sal set up shop when she met a young Dunstan Thorn who visited her stand. She called him a time waster and told Una to tend the stand while she went off to get a pint at the Slaughter Prince. Una and Dunstan spent the night together and the Princess gave birth to a boy she named Tristan Thorn. Sal forced Una to give up the child and she left the baby at the gap in the wall where the guardian delivered him to Dunstan and raised him. Sal was shown to have a habit of transforming innocent people into animals, as seen with Una, whom she transforms into a blue bird when her services were not required, and Tristan Thorn.

While on the road, Sal set up camp and encounters Lamia which she does not recognize. Semele offers food to her and mixes Limbus grass in Lamia's food, forcing her to tell Sal of her plans to recover the heart of the fallen Star. Sal tried to get the whereabouts of the Star from Lamia. Upon realizing, Lamia furiously asks Sal if she has any idea who Lamia is. Realizing that Lamia is the Dark Witch Queen she begs for mercy, promising not to seek the Star. Outraged, Lamia puts a spell on Sal which prevents her from realizing the presence oft he Star: Sal will not be able to hear, see, smell or touch Yvaine even if she stands right in front of her. Sal later visited Fergy's shop and met Captain Shakespeare who was with Yvaine but she did not see her.

On the way to the Wall, Tristan and Yvaine see Sal’s carriage coming closer. Because she saw her with Shakespeare, Yvaine falsely assumes that Sal is a friend of the captain and tells Tristan so. They stop Sal’s carriage to ask her to give them a ride. Due to Lamia’s spell she only sees Tristan and does not respond to Yvaine at all. After first trying to get the flower (which Una sold to Tristan's father) back by force, she is then stopped by Tristan’s drawn sword. When Tristan tells her that he will give back the flower in return for safe passage to Wall, Sal agrees and promises to deliver Tristan completely unharmed. After he gives her the flower she states that he clearly has no idea how valuable the flower is, being a charm that forbids witches to use magic on the one who wears it. She then turns Tristan into a squirrel and loads him in a cage. Yvaine enters the carriage unseen.

After arriving at Wall, she turns Tristan back into a human and leaves him. Later, she is trapped into her own carriage while sleeping when her slave Una drives the carriage to the Wall to stop Yvaine from certain death. On the way to the wall, Sal was thrown around in her carriage as Una made sharp turns when driving. When they arrive at the Wall, Sal furiously storms out of the carriage to see Una and Lamia. Lamia recognizes Yvaine as the fallen Star and speaks this out loudly. Sal, who cannot see Yvaine, does not understand and asks Lamia if she means Una. She assures Lamia that Una is not a Star, stating that she would have killed Una and had her heart long ago if she were a Star and to trust her. Remembering the last meeting, Lamia states that she would be a fool to trust Sal again and attacks her with magic, and the two begin a magic duel with Sal fending off her magic with a smoke shield made of her own magic. But Sal lost the duel having her head blown off with Lamia's magic and thereby killing her. Sal's body later disappears in a fiery glow leaving a burnt body mark on the ground.

Sal sets up camp near a ravine in the country.

Sal receives a visit from the Witch Queen Lamia.

Sal magically turning her slave Una back into a bird.

Lamia placing an enchantment on Sal not to see the Star. 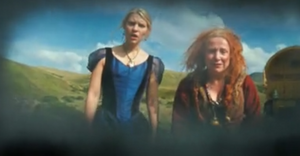 Sal turning Tristan into a squirrel. 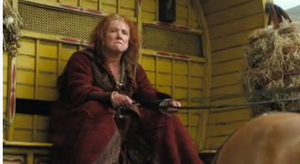 Sal riding on her carriage.

Sal transforming Tristan back into a man.

Sal asleep in her wagon when Una locks it.

Sal knocked around the carriage while Una drives it.

Sal blasting the carriage doors off with magic.

Sal holding Una saying she's not a Star to Lamia.

Sal leaving a mark on the ground.
Add a photo to this gallery
Retrieved from "https://villains.fandom.com/wiki/Ditchwater_Sal?oldid=3640089"
Community content is available under CC-BY-SA unless otherwise noted.