Ditto, also known as Ms. Norman, Roger Clifford, and various other names, is the secondary antagonist of the 2019 video game film Pokémon: Detective Pikachu. It is a Pokémon with vast shape-shifting abilities, who acts as the assistant, Pokémon partner and accomplice of Howard Clifford.

According to Howard Clifford's son Roger, Ditto was part of one of his father's many genetic experiments with Pokémon, and had its natural shape-shifting abilities made far more powerful. Clifford then took Ditto in as his Pokémon partner, and it would in turn adopt the persona of Ms. Norman; Clifford's human assistant, who would perform tasks that Clifford would be unable to do in his disabled state. It also continued to help Clifford complete his plans of merging all people and Pokémon in the world in order to help humanity evolve, and was presumably aware of his role in trying to have Harry Goodman and his Pikachu eliminated.

Pretending to be Ms. Norman

Ditto is first seen when Tim and an amnesiac Pikachu go to the Clifford New Media building to get information about Harry from Lucy Stevens; an intern at the network with the desire to be a reporter. After airing an advertisement for their upcoming parade in celebration of Ryme City, Roger angrily criticizes his father for seemingly always overshadowing him and praising his own accomplishments; however, before the argument can continue, Ditto (taking human form) wheels Howard away. Later on, after meeting with Lucy and interrogating a Mr. Mime for information, Tim and Pikachu are lead to the arena where Sebastian holds illegal Pokémon battles in their search for the source of the drug R (which causes the Pokémon who inhale it to go berserk); however, while they are there, they are spotted by Ms. Norman, who texts Clifford to tell him about their presence. Ms. Norman later leaves the arena some time before Sebastian's R is accidentally unleashed and causes all the Pokémon there to rampage.

Not long after the arena is compromised by the police and Lieutenant Yoshida shows Tim and Pikachu footage that proves it was unlikely Harry survived his accident, Ms. Norman arrives outside police headquarters and silently motions Tim and Pikachu to come with her. Ms. Norman takes them to Clifford's office and then leaves, with Pikachu commenting on how quiet she is. Clifford proceeds to implicate his son in the distribution and creation of R and uses a holographic recreation of Harry's accident to show Tim and Pikachu that he did in fact survive, but was abducted by Mewtwo, whom they need to find in order to locate Harry.

Pretending to be Roger Clifford

Following Clifford's lead, Tim and Pikachu get information from Lucy that leads them to going with her and Psyduck to PCL to find out what Harry was investigating there; while, unbeknownst to them, they are being watched by Roger Clifford through the security cameras (though, in reality, "Roger" is again Ditto in disguise). Roger, while driving to the facility with his other henchmen, remotely releases the Greninja PCL was experimenting on to deal with Tim and the others, who are narrowly able to escape. Pikachu is subsequently injured after escaping the field of colossal Torterra created by PCL's growth-enhancing experiments, and Tim manages to convince a group of Bulbasaur and Morelull to lead him to a Pokémon capable of healing Pikachu, and they take him to Mewtwo. Mewtwo heals Pikachu and begins to explain his intentions by projecting his memories into Tim and Pikachu—including the fact Pikachu had helped him escape and met with him after the accident—but before he can finish, Roger restrains and captures him using machines and leaves Tim and Pikachu behind.

A short while later, Tim, Lucy and Psyduck return to the city to warn everyone about Roger's plans—Pikachu having abandoned them after concluding that he betrayed Harry and lead to his disappearance. Lucy attempts to warn the mayor about Roger's plans during the parade, only to be spotted by Roger himself; meanwhile, at the same time, Tim tries to warn Clifford, only to find that he has used Ann Laurent's neural device to transfer his conscience into Mewtwo's body and is planning on using his newfound power along with the R gas hidden in the parade balloons to merge the minds of humans into the bodies of Pokémon. As Clifford begins to enact his plan and attacks the city, Roger smiles and begins to return to Clifford's office. There, Tim realizes that the only way to stop him is to remove the neural device from his body and thus free Mewtwo from his control. Before he can do this, he finds Roger tied up and stuffed in a closet, and turns around to see another Roger, which reveals itself to be Ditto by changing into Ms. Norman and then into its natural form.

Shape-shifting again, Ditto takes a Loudred's form to attack Tim, and then fights with him in Lucy's form (also revealing that it needs to use glasses to cover up its naturally occurring eyes, which don't change no matter its form). After dealing with Pikachu, Clifford orders Ditto to finish Tim off, which it attempts to do by punching him over to the window as Machamp and then transforming into Cubone to swat his fingers until he falls. Before Tim can fall off, Roger smacks Ditto out of the building with a chair and pulls the former up, mentioning how Ditto was enhanced before the Pokémon flies back in as a Braviary and turns into a Bouffalant to knock him out. Ditto continues to change form and attack Tim, and manages to corner him, intending to finish him off. Before it can succeed, however, Tim unleashes a pipe of R in its face, causing it to erratically change through different forms before passing out. It is unknown what happened to Ditto after Clifford's arrest. 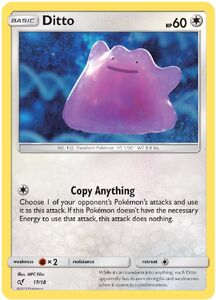