The Diva of the Century
The Singing Diva

Tearing dolls purchased by her Chevaliers.

Take revenge on Joel I for locking her on a tower and using her on experiments (succeed).

Find suitable suitor and become pregnant with children (succeed; failed in the manga).
Raise a family in a world dominated by Chiropterans.
Kill Saya if she gets in her way (both failed).

Diva is the main antagonist in the manga and anime Blood+. Like her twin sister, Saya Otanashi, Diva is a queen Chiropteran, a vampire-type creature that feeds on the flesh and blood of humans.

She is voiced by Akiko Yajima in Japanese, and Kari Wahlgren in English.

While dissecting a chiropteran mummy, Joel Goldschmidt and Amshel Goldsmith discovered two cocoons embedded inside the mummy's womb. After accidentally cutting his finger, Joel realized that the blood had revived the cocoons. This ultimately resulted in the birth of two Chiropteran queens: Saya and Diva.

Amshel and Joel agreed to initiate a social experiment involving the two newborn Chiropterans. While Saya received a lavish and comfortable upbringing, Diva was locked away in a dark tower with no human contact whatsoever, treated like a monster. It is because of her cruel treatment that she began to hate her human captors and developed a cruel and sadistic personality as a result. One day, Saya went exploring the tower and met her, and the two formed a friendship. Saya would often visit her, and one day named her Diva due to her amazing singing talents. One day, Saya let Diva out to sing for Joel Goldschmidt's (her adoptive father) birthday, and Diva used this opportunity to take revenge on the humans who treated her like an animal, slaughtering them all. She turned Amshel Goldschimdt (Joel's brother) into a Chiropteran and he became her first chevalier.

After meeting Riku, Saya's adopted brother, she drinks most of his blood and Saya is forced to turn him into a chevalier to save his life. After this incident, Diva becomes increasingly interested in Riku, eventually infiltrating the Red Shield headquarters with Karl to find him. She rapes Riku, and kills him by giving him her blood which crystallizes him. A year after this attack, when the Red Shield is able to regroup, Diva has changed her physical appearance to resemble Riku and retains that appearance until her final battle with Saya. Diva moves to New York and, with help from the Cinq Flèches Group, becomes a singer. Cinq Flèches has spread the Delta 67 agent, which can turn people into Chiropterans, across various populations of the world, including the United States. When heard live, Diva's voice greatly increases the effectiveness of the agent.

As a result of her raping Riku, Diva becomes pregnant. She does not give birth for over a year, when Amshel cuts the cocoons out of her body. Diva seems to treasure her babies and caring for the cocoons. At the Metropolitan Opera House, Diva is set to perform a live broadcast which would cause much of the world's population to turn into Chiropterans. The Red Shield and Saya are able to stop the broadcast, and the sisters have their final battle, while Diva's chevalier Nathan watches nearby with the babies. The fight ends as Diva and Saya pierce one another with their swords, which each had coated with their own blood. Saya is unharmed by the attack, due to Diva's blood having lost its power when she became pregnant. Diva, on the other hand, begins to crystallize from the effects of Saya's blood. Her babies emerge from their cocoons and Diva reaches for them, imagining herself with her daughters and smiling at the vision before dying.

As a result of her upbringing, Diva has an extremely malevolent and ruthless nature wrapped in an often childlike demeanor. She derives sick pleasure from killing humans, and shows little to no regard for anything occurring around her, even when her own Chevaliers are killed. She is also shown to enjoy tormenting Saya. Often mocking Saya's futile attempts to defeat her, Diva eventually goes after Saya's adopted family members in an attempt to break her sister.

As Nathan reveals in Episode 49, however, all of Diva's sadism and sociopathy actually masquerades her true desire to raise a family in a world dominated by Chiropterans. Even though she had never experienced a normal life and despises humans, she sees her unborn children as a chance to finally escape constant manipulation from Amshel and as a chance to show affection for the first time in her life. Ultimately her children are her main motivation to follow through Amshel's final plan, wishing to live in a world where she and her children can live in peace believing she never coexist with humans due to never experiencing any love towards them.

Diva has the power to make other people her Chiropterans by feeding them her blood. Over the years, she has made several men Chevaliers, elite Chirpoterans who retain their humanity whilst pledging themselves to their creator, and her Chevaliers generally act as her bodyguards and enforcers; for example, rather than fight Saya face-to-face, she often sends a Chevalier to fight instead.

Moreover, Diva is a competent swordswoman. Through utilizing abilities and owning a blade like that belonging to her sister, she poses a challenge to Saya, especially after the latter gradually begins to enter hibernation.

Most notably, Diva was a born singer and in fact she was named after this talent by Saya who heard her sing and henceforth called her "the singing Diva". In Diva's first concert, many claim her to be "the Diva of the century". When heard live, her song is able to increase the chance of humans turning into Chiropterans who had ingested Cinq Flèches products infected with the Delta-67 agent from 3% to 100% likelihood. 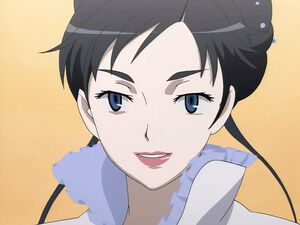 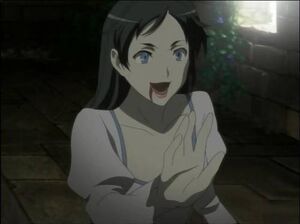 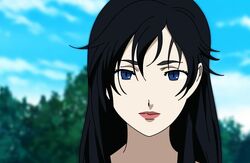 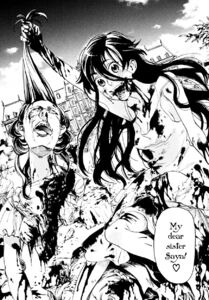 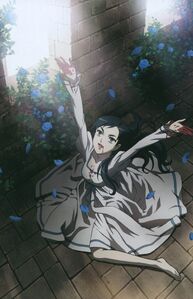 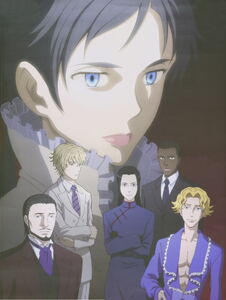