Sisters of Salvation
The Divas of Doom

To take over the Divas Division by destroying every Diva in WWE.

The Divas of Doom were a villainous women's wrestling tag team that consisted of Beth Phoenix and Natalya. The duo competed as villains from August 2011 until March 2012.

On August 1, 2011, Beth Phoenix won a #1 Contender's Battle Royal by lastly eliminating the Bella Twins, earning a shot at Kelly Kelly and the Divas Championship at SummerSlam. Kelly left her position at the announce table to congratulate Beth, but at that moment, Beth attacked Kelly both inside and outside the ring, turning Beth into a villainess. After the attack, Beth informed Kelly that "her days at the cute blonde bimbo are over." Four days later on SmackDown, Natalya defeated AJ Lee, one of her two proteges (the other being Kaitlyn), in singles action. Natalya turned heel after the match ended and attacked AJ, and then proclaimed her allegiance to Beth, stating that "the days of the perky princesses are over."

On August 12, Beth and Natalya, now known as the Divas of Doom, defeated AJ and Kaitlyn in tag team action. After the match ended, Natalya placed Kaitlyn in a painful Sharpshooter submission, while Beth laughed evilly and watched. Regarding SummerSlam, Beth was unsuccessful in dethroning Kelly as Divas Champion, and the villainous duo continued to feud with the aligned team of Kelly and Eve Torres after the event.

Beth defeated Eve on Raw to become #1 Contender once again, but she again was defeated by Kelly at Night of Champions in Beth's home town of Buffalo. On an edition of SmackDown just two days before Hell in a Cell, Beth attacked Kelly from behind and watched as Natalya placed her in the Sharpshooter. At the event, Beth finally captured the Divas Championship from Kelly, after the evil Natalya struck Kelly with a microphone.

After ending her feud with Kelly, the DOD had Eve Torres in their sights, beginning with Vengeance, which saw Beth successfully defend her title against Eve. She did so again at Survivor Series, after delivering a Glam Slam to Eve from the top rope. During the month of November, The Divas of Doom continued to battle against AJ and Kaitlyn, beginning with the November 18 edition of SmackDown, which saw the DOD victorious. After the match, Kaitlyn began turning villainous and glared at AJ (who was feeling the effects), apparently blaming her for the loss. On the following Friday, the Divas of Doom defeated AJ and Kaitlyn once again, and after the match ended, Kaitlyn continued her heel turn and berated AJ before walking off. Meanwhile, the DOD tortured AJ; placing her in the Sharpshooter while Beth mocked her, but they were stopped by Alicia Fox. On the December 9 episode of SmackDown, the Divas of Doom again defeated AJ in Kaitlyn in a tag team match. After the match, the evil Kaitlyn completed her transition into a villainess and joined the Divas of Doom. However, because the entire bout was cut from that night's broadcast, Kaitlyn isn't recognized as a member of the DOD.

The Divas of Doom continued as a duo and teamed with the Bellas in defeating Eve, Kelly, Alicia Fox, and Tamina at the Royal Rumble. Beth continued to successfully defend her title against Eve on the next night and against Tamina at the Elimination Chamber. The duo quietly split up by March 2012, with Beth and Natalya on opposite sides of a tag team bout on Superstars. Beth teamed with a heel Eve in defeating Natalya and Tamina. 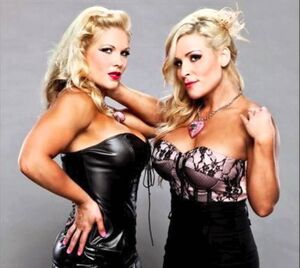 Add a photo to this gallery
Retrieved from "https://villains.fandom.com/wiki/Divas_of_Doom?oldid=2760983"
Community content is available under CC-BY-SA unless otherwise noted.