Take over the cosmos.

Free Maligore from his centuries-old slumber and join forces with him in her quest to conquer the universe.
Destroy the Power Rangers (all failed).

She was portrayed by Hilary Shepard Turner and Carol Hoyt.

Divatox was raised as the adoptive daughter of Mama D, an infamous sea hag, and eventually became a powerful space pirate. After gathering a crew of alien cutthroats, including Elgar, Rygog, and Porto Divatox began traveling throughout space stealing numerous riches to satisfy her greed. She also became an acquaintance of Rita Repulsa's at some point.

Divatox eventually decided to take a break from piracy and began seeking the wizard, Lerigot, so as to gain access to the lost island of Muranthias. By doing so, she hoped to marry the Malachian's demonic god, Maligore, so she could gain his power. Divatox captured Jason and Kimberly, the former Power Rangers so as to use them as sacrifices for the demon and managed to use them to make the Power Rangers give up Lerigot, but didn't turn over Jason and Kimberly. With Lerigot now in her hands, Divatox's submarine, the Subcraft, was able to travel through the Nemesis Triangle to the island of Muranthias. But she soon became aware that the Power Rangers were following her and constantly attempted to destroy them. Divatox even called Rita Repulsa for advice on how to take care of the Rangers, only to be told that she should flee. She managed to awaken Maligore, but the Power Rangers crashed the ceremony and destroyed the demon with the Turbo Megazord. Divatox became furious and swore vengeance on the Rangers.

Divatox came to Earth to enact her vengeance and conquer the planet. She managed to find out who the Rangers really were and tried to sabotage their graduation ceremony but was unsuccessful. Divatox then sent out monsters to attack on a daily basis and later discovered the Blue Senturion, who informed her that he had a message for Dimitria. The space pirate posed as her so as to hear the message and was shocked by what she heard. In the future, Divatox would ally herself with Rita Repulsa, Lord Zedd, and the Machine Empire, defeat all the Power Rangers, and conquer the universe then divide it up amongst themselves. But the idea of dividing the universe's riches was something Divatox didn't like. She later received help from Mama D and General Havoc, who helped her steal the Turbo Megazord and the Phantom Ranger's power ruby, which she used to take control of the Megazord. Divatox sent it into battle against the Rangers' Rescue Megazord, but they regained control of it. She later sent the powerful monster, Goldgoyle, who managed to destroy both of the rangers' Megazords. Later when Rygog and Elgar managed to discover the location of the Power Chamber, Divatox sent her forces in an all out assault on it. After having explosives planted inside, she detonated them, blowing the place to smithereens. After the dust settled, Divatox had her forces search the rubble to make sure the rangers really were gone. However she received a summons to the Cimmerian Planet for a meeting of the United Alliance of Evil. Though Divatox refused the summons at first since she was on the verge of conquering Earth, she immediately listened when she found out the summons came from Dark Specter.

During the United Alliance of Evil's meeting on the Cimmerian Planet, Divatox had a run in with Rita, where she bragged about destroying the Power Rangers. After the Red Space Ranger, discovered spying on the meeting, escaped, Divatox was tasked with hiding Zordon until Dark Specter could completely drain his power. She first brought him to planet Hercuron but had to take him elsewhere after the Phantom Ranger discovered him there. Later when Storm Blaster, which Divatox had captured after defeating the Turbo Rangers along with Lightning Cruiser, escaped, she contacted Astronema to see if she'd seen it, but ended up losing both vehicles to the Power Rangers with help from the Blue Turbo Ranger. After Dark Specter initiated his conquest of the universe, Divatox attacked Gratha, where she

battled the Aquitian Rangers. She was quite shocked and outraged when Astronema was announced as the new Queen of Evil. After Zordon's wave of energy swept across the universe, she was purified and turned human, making it even more clear that she was something many fans believed she was, Dimitria's long lost sister.

Divatox is an extremely cruel, vain, arrogant, manipulative, and pompous ruler who refuses to accept defeat. She treats her henchmen like garbage, especially Elgar, though she seems to have a soft spot for Rygog. Divatox is prone to hysterics and overreactions and is known to have a very short temper. She also gets jealous of others quite easily, due to being spoiled much of her life and never settles for second-best.

Divatox can teleport and fire energy beams from her eyes, as well as beams that change objects from one thing to another. She also has a lizard like tongue that is quite fast and strong and wields a retractable blade in the gauntlet on her left arm, which she is rather fast with as seen when she once cut off Elgar's hand once. Divatox is also quite strong as seen when she flipped a skilled fighter called Visceron to the ground and beat Elgar in arm wrestling. 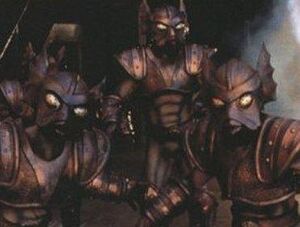 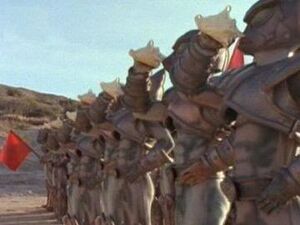 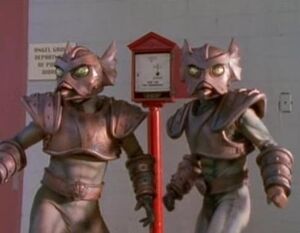 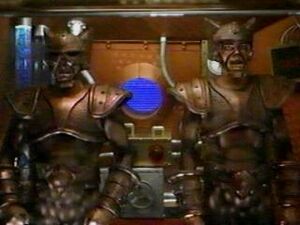 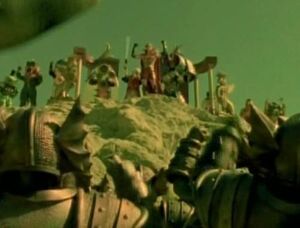 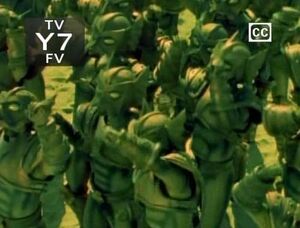