Ability to be underwater

Brainwashed Robot
Dive Man is one of the eight Robot Masters created by Dr. Cossack in Mega Man 4, where he serves as a minor antagonist.

Dive Man looks like a blue submarine, his hands and feet are white while his arms and legs are black, on his chest has a figure of a red anchor.

In Mega Man III, Dive Man is one of the four Robot Masters that Mega Man would defeat at Wily Castle.

Dive Man appears on the "Rescue Roll" route, he can now dive under the ground to attack Mega Man, his weakness is the Thunder Beam.

In Rockman Strategy, Dive Man and Aqua Man team up with Capricorn.

Dive Man appears in Super Smash Bros. Ultimate as a novice support spirit that makes the fighter start the battle with a Steel Diver. His spirit battle is a stamina battle on the Great Bay stage against two light blue Mega Man equiped with Steel Divers.

In the Mega Man cartoon, Dive Man appears in the episode "20,000 Leaks under Sea". 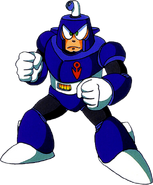