Divine, also known by her alias Babs Johnson, is the main protagonist of Mondo Trasho, Multiple Maniacs, and Pink Flamingos.

She is known around the world as the filthiest person alive, engaging in and openly promoting a wide range of perversions, including incest, cannibalism, rape, disgusting sex fetishes, and mass murder. In addition, she makes her money by robbing and extorting people. Ironically, although she is openly an extreme pervert, she is also a devout Roman Catholic. She routinely gives credit and praise to the Virgin Mary for granting her "divinity".

Despite being a female, she was portrayed by the late Glenn Milstead, who used his Divine persona to launch an acting and singing career, and who also played Dawn Davenport in Female Trouble.

In Mondo Trasho, Divine is supposedly an ordinary woman living in Baltimore, Maryland. One day while driving her car, she sees a hitchhiker that she finds attractive and decides to pick him up. However, while crossing the street, she accidentally hits a young woman. Divine puts the woman in her car and takes her to the hospital, with many detours on the way.

She is routinely visited by the Virgin Mary, who Divine honors and bows to every time, and asks Mary to grant her divinity. After she gets to the hospital, the unconscious woman has her feet amputated and replaced with giant bird talons.

In Multiple Maniacs Divine is now known as Lady Divine. She runs a traveling freak show known as The Cavalcade of Perversion, that consists of numerous people, including prostitutes, heroin addicts, and people that eat their own vomit. After people see the show, Divine and her minions rob the audience at gunpoint. Divine goes back to her home, where she lives with her daughter Cookie, who is a prostitute.

Lady Divine quickly discovers that her former right-hand man, Mr. David, is plotting against her. She goes into town to confront him, but on the way is raped by two drug addicts that sniff glue. After being raped, Divine retreats to the local Catholic Church. While she prays, she starts thinking about the story of Jesus Christ in vivid detail. Meanwhile, a woman makes sexual advances on her while she is praying, and the two engage in sex while in the pew, going so far as to use a rosary as anal beads. While most people would find such activity as sacrilegious, Divine sees the moment as a way of making her closer to God, constantly praying and saying, Hail Mary, while engaging in sex. The woman reveals that her name is Mink.

The two women are now a couple and decide to deal with the traitor Mr. David. They find Cookie dead when they return home, and find Cookie's boyfriend tied up by Mr. David and his mistress Bonnie. Divine kills both Mr. David and Bonnie with a knife and eats their hearts. Mink accidentally shoots Cookie's boyfriend, and Divine, believing that Mink has betrayed her, kills her. Then a giant lobster enters the room and rapes Divine. Divine runs out of her home and starts killing random strangers. She is chased by an angry mob and the National Guard who end up shooting her.

In Pink Flamingos, Divine has survived the shooting in Multiple Maniacs and is now living in a trailer outside Baltimore with her son Crackers, her traveling companion Cotton, and her mother. Divine is living under the alias Babs Johnson. Divine's mother, is obsessed with eggs and resides in a playpen talking about eggs and eating eggs all day. Divine is now famous nationwide as "The filthiest person alive". At the start of the film, she goes on her with her regular day, stealing raw steak, and urinating on people's lawns.

Things turn sour when Divine's family receives a bowel movement in the mail from fellow perverts Connie and Raymond Marble, who wish to steal her title as the filthiest person alive. Divine swears revenge. But in the meantime, Divine has a birthday party for herself at her trailer. Guests include drug addicts, neo-Nazis, transvestites, strippers, and snake handlers. Connie and Raymond call the police on the party, but when the cops show up, they are massacred by the guests and eaten.

Divine and Crackers discover Connie and Raymond's home, and while the residents are away, Divine decides to vandalize their home. She even performs oral sex on her son to "curse the house".

When they get back to their trailer, they discover it burned to the ground by Connie and Raymond. They kidnap the couple and hold a mock trial in front of the press and execute them. They decide to flee to Boise, Idaho.

In the last scene of the film, Divine decides to pick up a freshly laid bowel movement from a dog and eat it. 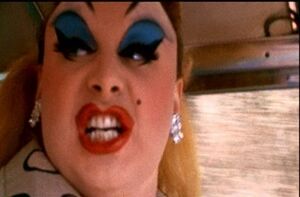 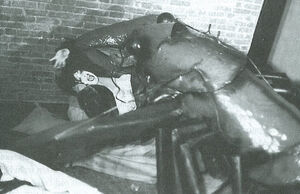 Divine being assaulted by a giant lobster 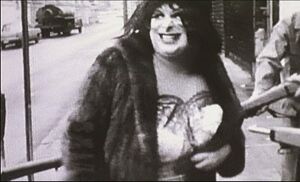 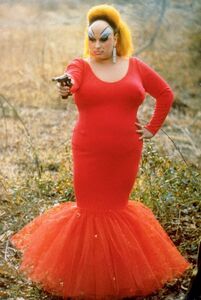