During the SAO incident

Obtain any and all rare items.
Beat all of the bosses.

The Divine Dragon Alliance, abbreviated DDA, are a group of minor antagonists and anti-villains in the anime/light novel/manga franchise Sword Art Online. They are a secretive clearing guild that will do anything to beat the death game Sword Art Online, even hurting or stealing from other players.

All the members of the DDA were players of the virtual reality MMORPG Sword Art Online. However, like the rest of the players, they were all trapped when Akihiko Kayaba imprisoned all player in the game with the rules that if they beat the game, they could leave, but if they died in the game, they would die in real life. The DDA was formed not long after as a guild of elite and powerful players intent on clearing the game and freeing everyone by any means necessary. They quickly rose as one of the most powerful clearing guilds in the game alongside the Knights of the Blood Oath. However, unlike the KoBO, the DDA were much more secretive with their information and more brutal with their tactics. They would often employ dirty or even violent measures to clear floors, defeat rare or flag bosses, and obtain rare items in the hopes of becoming stronger so they could beat the game more easily later.

On December 24 (Christmas Eve) of 2023, a secret flag boss called Nicholas the Renegade was set to appear under a fir tree, and was rumored to drop an item called the Divine Stone of Returning Soul, which could somehow revive a dead player. Protagonist Kirito sets off to find it in hopes of reviving his deceased friend Sachi, but is followed by both the friendly guild (run by his friend Klien) and the DDA. Klien's guild holds off the Alliance as Kirito goes and fights the boss solo. The DDA is driven away, and Kirito returns later, a blank expression on his face, very low health, and carrying the Divine Stone of Returning Soul, showing that he destroyed Nicholas the Renegade. However, he throws the Stone to Klien, who reads the description and finds that the Stone can only be used up to ten seconds after a death.

Some of the DDA were present when Kirito discovered that fellow player and leader of the Knights of the Blood Oath Heathcliff was really Akihiko Kayaba disguised. Kirito fought and defeated Kayaba, clearing the game prematurely and freeing everyone. When Sword Art Online vanished, the guild was disbanded. 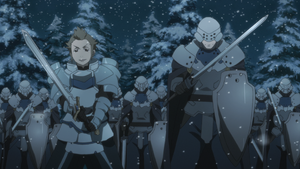 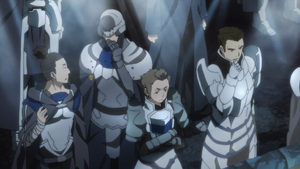 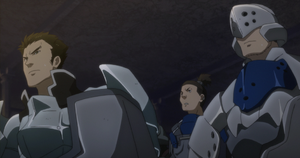