Fire Demons
A Genie in a Bottle (by Sully)

Escape from their imprisonment in the vessel of brass (presumably).

The Djinn are minor yet pivotal antagonists in the 2011 video game Uncharted 3: Drake's Deception. They are demons that were imprisoned within the depths of Iram by King Solomon that resulted in dooming the city and its people.

According to legends, the Djinn were demons that were commanded by King Solomon during his reign 3000 years ago until they turned on him. When the Djinn rebelled, Solomon imprisoned them all inside a brass vessel before casting it into the heart of the city. However, as a result, the vessel, or whatever was inside it, tainted the city's water supply like a hallucinogenic agent and drove all of the residents insane from their worst fears, which led to the destruction of the city.

In the early 1580s, Queen Elizabeth I wanted to use the power of the Djinn to control her enemies through fear. She sent Sir Francis Drake to find the remains of Iram and locate the vessel containing the Djinn spirits. However, after Drake uncovered what the Djinn could do and what the Queen's true intentions were, he ended the mission. After returning to England and lying to the Queen that he didn't find anything, he erased all traces of his voyage and rewrote history to prevent the demons from escaping. Unbeknownst to Drake, Elizabeth saw through his lies and formed a secret order to locate Iram and retrieve the vessel by any means necessary and continue her mission.

During the events of the game, the vessel was pursued by the order and its modern era leaders, Katherine Marlowe and Talbot, who were being challenged for the city's finding by Nathan Drake and Victor Sullivan. During the journey, the two of them and Elena Fisher uncover Sir Francis Drake's messages warning people to turn back. Upon meeting Salim, Nate was told of the legend of the Djinn and what they did to Iram, warning him about would they could do to the whole world if released.

After Nate arrives at the city and drinks the water, he is instantly driven mad by it effects. He witnesses Talbot killing Sully before pursuing him out of rage. During the chase and voyage through the lost city, he hallucinates fighting mercenaries who would become possessed by the Djinn after getting killed. After the effects wore off, he and the real Sully were able to stop the order from winching the vessel out of the water. After which, they destroy and escape the city along with the order and its agents, ultimately ending the threat of the Djinn forever. 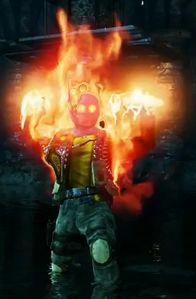 A Djinn whilst possessing a dead host. 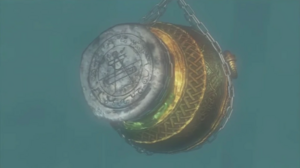 The brass vessel in which the Djinn are imprisoned.
Add a photo to this gallery

Retrieved from "https://villains.fandom.com/wiki/Djinn_(Uncharted)?oldid=4315264"
Community content is available under CC-BY-SA unless otherwise noted.