Djinn (named after his people)

Member of the ancient Djinn race

Granting wishes of foolish mortals and transform them into their worst nightmares.

Free the other Djinn and bring an end to the human race (ongoing).

Twist the wishes his victims grant in a way that'll kill them.

The Djinn also called himself "The Wishmaster", is an ancient, evil genie and is the main antagonist of the Wishmaster horror movie series.

He was portrayed by Andrew Divoff in the first 2 Wishmaster films, and later John Novak in both 2 direct-to-video sequels Wishmaster 3: Beyond the Gates of Hell and Wishmaster: The Prophecy Fulfilled.

Though a hideous monster in his true form, he is an adept shapeshifter and manipulator who wishes to free his fellow djinn so that they can take over the world and destroy humanity.

However, in order to do so, he must grant three wishes for the person who freed him. Unlike most other evil genies in popular culture, the Djinn can grant an infinite number of wishes to anyone who didn't set him free and is a sadistic villain who greatly enjoys making people wish for things and warping them into gruesome and nightmarish scenarios.

For instance, in the first movie, the Djinn (while in his human disguise as Nathaniel Demerest) at one point is in a high-end clothing store, and convinces the clerk, a lovely young woman who he causes to worry about losing her looks with age, to wish that she could be young and beautiful forever. He then grants this wish by transforming her into a mannequin in the store.

He also cannot be killed. (Although he can still feel pain, as he demonstrated in his first movie) The Djinn is one of the more powerful villains in horror, at least as powerful as Freddy Krueger and Pinhead; if not more so. His vast array of powers serving to make him a formidable opponent to any who would stand in his way.

However, in spite of his seemingly infinite capabilities, as the Djinn itself admits, it is not capable doing anything through its powers without a mortal asking him for something. In fact, evidence has it that it is actually incapable of anything without first receiving a wish. If the wish is not vague enough, he can never use it to kill them until he claims their soul (e.g. if someone wishes for $1,000,000, he has to make something happen to make it possible without immediately killing the one who made the wish)

Despite his powers, he can not grant wishes that cause cosmic paradoxes. For example, someone tried to defeat him by wishing for a world without evil, but he refused the wish; stating that without evil, good could not exist and the universe itself would collapse into nothingness. This shows that he is bond by some laws despite his evil nature.

The Djinn's powers are considered limitless and godlike. He can warp reality, alter time, bring inanimate objects to life, even create life. The only limitation to his powers is that they can only be used to grant the wishes of mortals. However, vague wishes allow the Djinn to twist them into horrific nightmares which can kill or maim them in the most gruesome ways possible, like causing a man in jail who wished to walk through the bars to be pulled through them, causing him to be crushed or causing a med student's eyes to be removed after he wished to not see the Djinn anymore. He is also immortal, and cannot be killed in any way but can be sealed away. Once he grants three wishes to the one who woke him, he can bring forth his entire race to claim the earth as their own.

In Wishmaster 3: Beyond The Gates of Hell and Wishmaster: The Prophecy Fulfilled, the Djinn is vulnerable to angelic weapons. In the third movie, he is killed by the young woman who released him using the Sword of Justice provided by the angel Michael once she proves herself worthy of wielding the weapon by trying to sacrifice herself to stop the Djinn. In the fourth movie, the main character's husband wishes for a way to kill the Djinn and the Djinn procures an angel sword for him. The man ultimately sacrifices himself to help his wife kill the Djinn with the sword.

The Djinn is portrayed as a sadistic, manipulative and prideful creature who will stop at anything in order to free his fellow Djinn so that they can rule over the world and use their seemingly infinite power however they chose. His pride is best shown in the first film when a man named Raymond Beaumont says "M-my God!" only for the Djinn to respond by saying "Not yet, human. Soon. Very soon, I will be."

The Djinn also has no problem admitting he is evil, in fact, he seems to be rather proud of this. When in disguise as a human, he often acts somewhat friendly and/or polite in an attempt to trick others into making wishes so he can collect their souls.

Another fact is despite being a master manipulator and fairly intelligent, his own downfall is due to both his pride and the fact instead of just granting wishes the way the user wants so he can unleash his race, he always twisted them to the point that his master hardly if ever wanted to use all three wishes. He also has been shown to have a twisted sense of humor, making a clever joke after brutally killing someone. 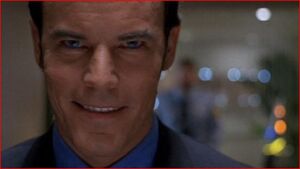 The Djinn as Nathaniel Demerest. 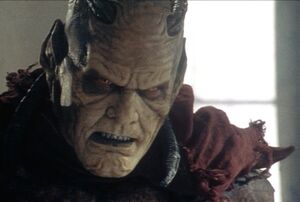 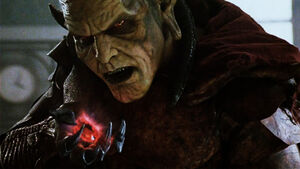 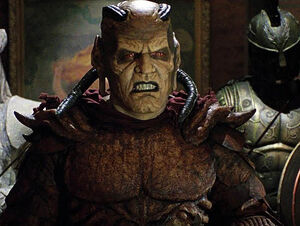 Add a photo to this gallery
Retrieved from "https://villains.fandom.com/wiki/Djinn_(Wishmaster)?oldid=3547487"
Community content is available under CC-BY-SA unless otherwise noted.