Test the willpower of mortal humans for them to choose good or evil.

The Djinn, also known as the Jinn, Djinnies and Jinnies, are ancient and preternatural beings that have their roots within Arabic mythology and later religious Islamic tradition would describe them as a race of spirits that are much like humans, and could be either good, bad or neutral, and tended towards their own society and norms.

In the modern age, the Djinn have become an immensely popular archetype in Western media, often simplified into their alternate name: the Genies.

Although in legend, the Djinn were considered equal to humans in later additions to the lore they gained specific traits that have now become firmly associated with "genies", such as being bound to a worldly item (usually a lamp or a jar or a bottle) and being forced into granting three wishes to whoever sets it free.

One trait that remains fairly similar to their ancient past is the Djinn's ability to be either benevolent, neutral, or malevolent - evil "genies" tend towards horrific features akin to demons, intensely vicious habits (such as murder and torture), and a tendency to either outright deny those that set them free wishes or twisting the wishes in an exceptionally dangerous manner that is designed to harm the user (unlike a neutral djinn the malevolent ones deliberately harm their foolish "masters" rather than simply grant a wish "literally").

If one was unfortunate enough to free a malevolent Djinn, it was possible to defeat the spirit, much like "Folk Devils", the Djinn could never be outmatched by force and any hero who wished to survive would have to act quickly to secure victory, using their wit to play the Djinn's often egotistical and prideful nature against it.

A common trick used against a malevolent Djinn was to play into its need to show how powerful it was, tricking the spirit into re-entering his lamp (or jar) and then sealing it - trapping the demon within before he could return to cause harm to his summoner.

If an evil Djinn was not contained, he could unleash terrible and contagious plagues upon the world - usually, this did not happen as stories involving malevolent Djinn tend to always end in the monster being contained in his jar/lamp (in some rare stories the Djinn may even be destroyed completely (this is uncommon as Djinn are usually portrayed as spirits and thus completely immortal).

NOTE: Ghouls are not to be confused with Zombies as is often with some of modern media depiction. They are strictly and clearly two separate species.

Ghouls ares a type of demonic creature found in Arabic mythology and folklore, but has also become a word used to describe a number of unrelated undead monsters - the ghoul was believed to haunt graveyards and dig up graves so as to feast on the dead bodies: this trait has remained an important part of the legend of ghouls and in most translations a ghoul is depicted as cannibalistic and degenerated. Ghouls are fiendish type of Djinn believed to be sired by Iblis.

One of the oldest surviving texts that relates to ghouls in One Thousand and One Arabian Nights but they have appeared in countless other legends and folklore around the world.

As a result of these myths the word "ghoul" has also been used to describe people who have a fascination with the macabre and grotesque - either as a tongue-in-cheek or an insulting and opprobrious term.

In dark fantasy and horror ghouls are often related to cannibalism and may be the result of living humans degenerating into monsters due to feeding on the dead - this is likely merging of the origin djinn stories and the tales of creatures such as Wendigo (all of which were designed to discourage cannibalism during famine or harsh winters). 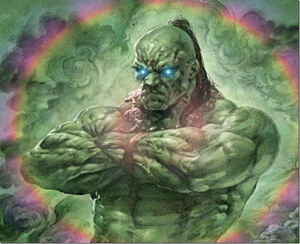 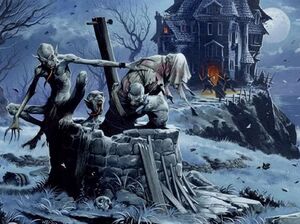 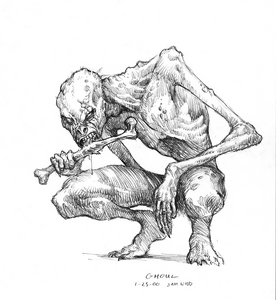 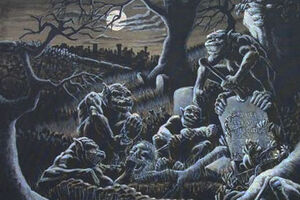 Add a photo to this gallery
Retrieved from "https://villains.fandom.com/wiki/Djinn_(mythology)?oldid=3524728"
Community content is available under CC-BY-SA unless otherwise noted.