Dr. Dmitri Smerdyakov was a scientist who in league with Vladimir Pavel Maximov and their fellow members of the Old One Cult, a secret society that worships one of the Old Ones. He is a villain in The Real Ghostbusters cartoon series.

Dmitri helped Vladimir steal the "Nameless Book" during a paranormal conference while the Ghostbusters performed a demonstration of their equipment there in Smerdyakov's home town of Pinsk within the European country of Belarus.

They met up with their cult members and began the process of unleashing the Old One at the moment. However, the pedestal holding up the book kept sinking at an Old One temple somewhere in Belarus. Dmitri was forced use his back to properly prop it up while it aches home badly.

After the Ghostbusters battled and defeated the Old One, he and Vladimir were arrested by the authorities while the rest of the cult disbanded. 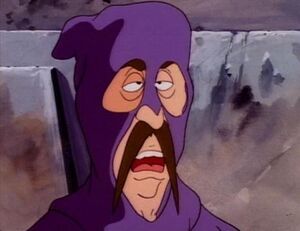 Dmitri Smerdyakov, a member of the Old One Cult.
Add a photo to this gallery

Retrieved from "https://villains.fandom.com/wiki/Dmitri_Smerdyakov?oldid=3585193"
Community content is available under CC-BY-SA unless otherwise noted.