Dobson is one of Captain Gutt's pirates and one of the secondary antagonists of Ice Age: Continental Drift.

His vocal sound effects were provided by Greg J. Peterson.

Dobson is a forceful beast who becomes a pirate in the employ of Captain Gutt after Gutt had rescued Dobson from an unknown fate. In gratitude, Dobson served aboard Gutt's iceberg-turned-ship as a member of his crew. Dobson and the crew, while out at sea one day, watched as their captain, Gutt, pulled up a saber-tooth squirrel out of the ocean after harpooning an acorn that the squirrel had been holding. The squirrel, named Scrat, had been half-swallowed by a fish and was afterward forced to dance on deck with the fish on him as entertainment for the crew.

While out at sea, Dobson, along with the others in the crew, witnessed as an ice floe that carried a mammoth, two ground sloths and a saber-tooth cat was towed closer to the ship's side. Dobson stood and awaited his captain's orders: Gutt presented himself to the marooned animals and called out that they were lucky to be found by Gutt and his crew. The mammoth, named Manny, called out that they only wanted to return to the continent, to which Gutt coldly stated that there was no way back.

At that, Gutt ordered his crew to attack the castaways, Dobson contributing by helping to load the log cannons as Raz, a kangaroo and fellow pirate, fired ice boulders from them with kicks from her feet. Dobson soon after boarded the ice floe (along with Raz) cornering Manny as Gutt fired an ice boulder straight into Manny's face, knocking him out cold.

During the final battle in Continental Drift, he was briefly seen fighting Manny, and along with Silas, Gupta, Raz, and Flynn, he was blasted off Gutt's ship by the whale Precious. It is unknown what happened to Gutt's crew after this. 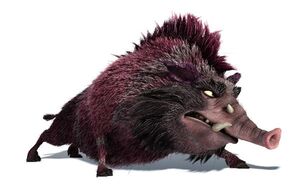 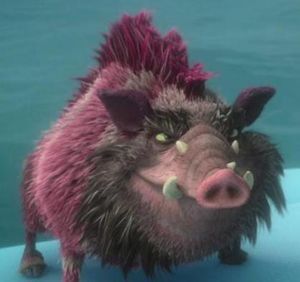