Employee of the Umbrella Corporation

Serve Umbrella (succeeded for a while).
Kill Alice and Claire Redfield (ultimately failed).

Doc is a supporting antagonist in the 2016 film Resident Evil: The Final Chapter. Throughout the film, he gives off an impression of being the leader of a band of apocalypse survivors shielding in a ruined tower block in Raccoon City. Be that as it may, he really fills in as an Umbrella Corporation informant who takes orders from Albert Wesker and Alexander Isaacs.

He was portrayed by Eoin Macken.

Doc is a long-time employee of Umbrella, having been a pawn of the organization's paramilitary forces for quite a long time. After the bombing of Raccoon City and the worldwide spread of the T-Virus, Doc was requested by Umbrella to lookout the exercises of any survivors inside the Arklay Mountains district of North America. He built up a survivor state in the colony of Raccoon City and helped them to last the end of the world for the majority of ten years, however he was completely mindful of Umbrella's plan to kill mankind and rebuild the world under the control of Umbrella High Command.

At one point, the group finds a damaged Umbrella helicopter, found and rescue Claire Redfield. Claire joins the group, and begin a relationship with Doc. She and Doc then became leaders of the group.

In 2012, Umbrella's plans was nearing realization when Alice come back to Raccoon City determined to get an airborne T-virus antigen from the Hive. Doc's gathering of survivors caught her, however released her as she could enable them to fight off a army of Undead heading towards their settlement. After a heated fight, the Undead swarm was destroyed. Doc and Claire Redfield then collected a gathering of volunteers to escort Alice to the Hive and help her acquire the anti-virus.

Doc fends off Christian's suggestion to kill her as they may require her for Umbrella's up and coming assault. As he is going to inject her with pure adrenaline to wake her, she as of now awake and places him in a chokehold, driving whatever is left of the survivors to hold them at gunpoint. Doc discloses to her that he needs her alert since "something's coming".

Doc is among the volunteers to run with Alice to wander into the Hive to recover the anti-virus. As they enter the Hive, Alice is secretly informed by the Red Queen that Umbrella has a informant, and that the person might be in Alice's group. Doc figures out how to fend off a few traps started by Wesker, but the rest of the survivors are separated in the process.

The two confront Isaacs, where he tells them to drop their weapons or else he prematurely destroys the anti-virus underground. Alice drops her weapon, while Doc points his gun to Alice, revealing his true allegiance to her and Claire, who arrives at gunpoint from Wesker. Doc observes as Alice is told by Isaacs of her true nature as a clone of Alicia Marcus.

When Alice confronts Isaacs and drops her weapon, Doc gunpoint Alice, revealing his true nature to Alice and Claire. After Alicia fires Wesker, making the Red Queen crushing his legs with an blast door, Doc attempted to shot Alice, however then realize that his firearm is empty. Alice use his weapon to knock him down. Doc asks how she knew that he was the informant; she answers that he was the only survivor left, as Umbrella wouldn't execute their agents except if they expected to. Doc is then begging her not to kill him, but rather she rather offers that chance to Claire. He tries to reason with her, saying that he was forced to work for Umbrella, yet Claire shoots him in the head, killing him in the process.

He has a charming personality and strong leadership skills, and this, accompanied by his medical expertise, helped him rise among the ranks and become leader of the survivors. This puts him at odds with Christian, who believes that he should be in charge instead, thus leading to infighting and factions within his group. 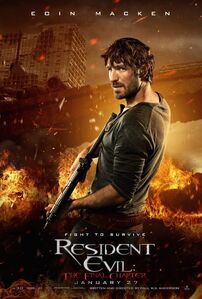 A promotional picture of Doc. 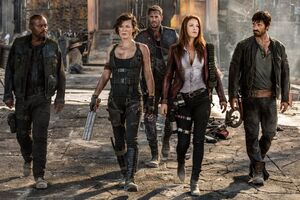 Doc with the group.