Powers belonging to the Robot Masters from Mega Man 2

Robotic Minion
The Diverse Operation Circuit Robot, better known as the Doc Robot, is a minor antagonist in Mega Man 3. It was sent by Dr. Wily after Mega Man has defeated the 8 Robot Masters. He is a boss that must be defeated 8 times before Mega Man can access Dr. Wily's Castle.

Not much is known about Doc Robot's personality. However, it's shown to be relentless against Mega Man as it attempted to kill him 8 times. Doc Robot is skilled in fighting, being able to copy and utilize the Robot Master Data it has to its advantage when fighting Mega Man.

The Doc Robot is a robot that was created by Dr. Wily. He is designed to carry a variety of weapons. His body has many attachments for any type of situation. These enhancements enable it to perform attacks that seem similar to other robots' abilities. For this reason, the Doc Robot is dubbed as an "All-Purpose Robot".

The Doc Robot appears in Mega Man 3 after the regular eight Robot Masters are defeated. Mega Man is required to revisit four stages. He will encounter Doc Robot twice during each stage. The robot will utilize powers belonging to a Robot Master from Mega Man 2. The attacks are identical to the previous game, but they are more powerful this time due to his larger size, making his attacks harder to maneuver.

The Doc Robot reprises his role as he did in Mega Man 3. 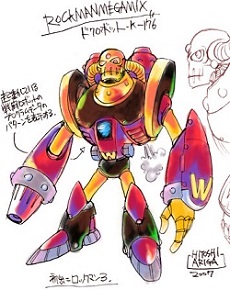 Concept art for the Doc Robot.